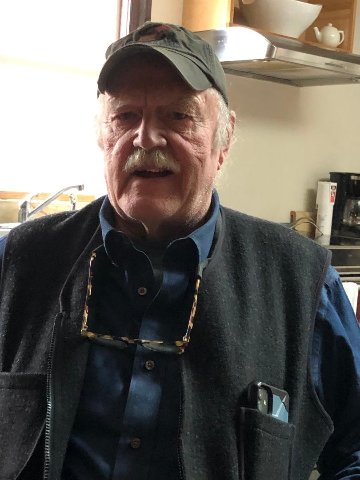 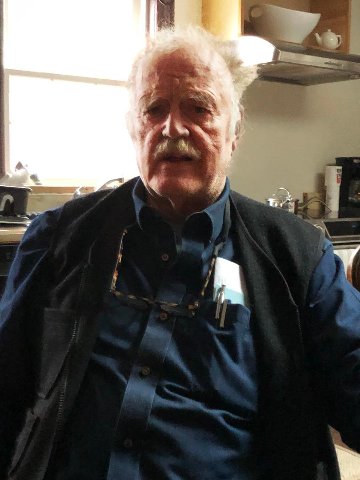 A day late, but with an apology, contractor and philanthropist, Geoffrey Richon strode into the kitchen of the Paul Manship Residence. We were packing to leave after a stay of three weeks in the Lanesville home and studio of the renowned American sculptor.

“I woke up at 3 AM last night realizing that I was supposed to see you,” he explained.

We knew each other as teenagers growing up in Annisquam. He a year-rouder and me there for summers of sailing and mischief. It had been decades since seeing each other although he stated having come, several years ago, to a reading I gave at the Annisquam Library.

I asked if he had attended any of the wild parties I threw in Norwood Heights? Yes was the answer though he hung out with different guys. Now 79, there is a three year difference in our ages which can mean a lot when we are young.

Channeling an image of back when, I gave him a good gander. He is a tall fit dude with a rugged mug exuding warmth, wisdom and wit. When removing his cap. a scrofulous tangled mop of thinning hair was revealed. The overall take was one of casual chic. The proletarian aura was negated by the Porsche he rolled up in.

There were many familiar names as we discussed coming of age in Annisquam.

Today, he is semi-retired from a successful construction company. “I have a project to finish but one of my three sons has taken over the business.”

While there has been a blight of condo development on Cape Ann, particularly in the past couple of years, Richon is widely respected for tasteful work and a deep involvement in the cultural life and philanthropies of the community.

“I prefer to renovate but we also build new homes. What’s happening now is crazy. Rich people are willing to pay any price to live here,” he said. “They tear down existing properties and put up what they want.”

The massive, upscale, waterfront Beauport Hotel is a case in point. It is sited on the former plant of Birdseye which processed frozen fish. There was a plan for a lower impact, fish fertilizer plant, public space, and smaller hotel. The presence of Beauport impacted the abutting, working class, Italian neighborhood, The Fort. The area has been flipped with pricey renovations.

Particularly in the past couple of years,  there has been an escalation of condo developments all over Cape Ann. One of the first was Nugent Farms overlooking Good Harbor Beach. It is sited on land swindled from the heirs of my great uncle George Nugent. It was his large pig and dairy farm. The tasteful town houses are sited among granite boulders and are painted in earth tones that blend with nature.

That’s not true for a controversial, generic, five unit development under construction in East Gloucester. It is sited on a former restaurant next to a gas station and Gloucester Writers Center.

“Two of the units have sold for $900,000 each which is crazy,” Richon said. “They are paying a lot of money for a view of a gas station. But if the owners have a boat they are close to the harbor, beaches, and downtown Gloucester.”

It’s impossible for young and working-class folks to find affordable housing. My cousin Charlie Flynn told me the frustrations of his son. “He got out-bid three times on modest homes.”

With so much development I speculated that the population of Gloucester  and subsequent tax revenue must have tripled from when we were teenagers.

“You would think that but it’s not true,” he said. “The population has remained steady at 32,000 although it is true that more is being spent by the city on renovation, schools and infrastructure.” Part of the odd statistics derives from the fact that for many condo owners it is not their primary residence.

It was fun to swap tales of growing up in upscale Anniquam. He described living in various houses including a large, vintage, white one behind the Village Church. Like many old Cape Ann homes ”There were pens for slaves.” Facing up to Gloucester’s involvement in the slave trade is a part of  issues commemorating the 400th Plus of the founding of Gloucester in 2023.

Dried fish, cheap food for slaves was traded for molasses in Suriname. In Gloucester the molasses was distilled as rum.

There were laughs about our time working for the dining room of the Annisquam Yacht Club. There was a generic menu of steak, Salisbury steak and lobster. I started as a waiter but got fed up being stiffed on tips and ended up in the kitchen. I worked under the beloved cook Eleanor, prepping and washing up.

I lacked the charm and flair of fellow waiter Jim Pear who had a way of getting tight-ass Yankees to loosen their purses. We recalled Jim as On busy Saturday nights cleaning up stretched past midnight. My gang would show up and party. I was known to toss dishes out the window, as apparently, did Geoff. But he got busted at low tide. After a wakeup call he scurried under the club to clean up the evidence which was miraculously intact.

Some of the diners could be arrogant pains in the butt. Geoff recalled a member loudly chewing him out about a steak. The kerfuffle was overheard  by vice commodore, Don Usher, who followed Richon into the kitchen. When the steak was refired, he removed  his jacket, slung a towel over his arm, then with great pomp served it to the rude guest. "That silenced him big time" Richon recalled with a hearty laugh.

He told me of waiters who would salvage unfinished drinks in a pitcher. “At the end of the evening” he said “They would partake of this elixir.”

Early on, he was building sets for Boston’s Charles Theatre and other companies.

During the 1970s, for several years he ran the Blackburn Tavern in a historic, large brick building at 2 Main Street. It is the current site of the upscale restaurant Tonno Gloucester.

His enterprise was named for the legendary Howard Blackburn (1859-1932) a Canadian American fisherman. Despite losing his fingers and toes to frostbite while lost at sea in a dory in 1883, he prospered as a Gloucester tavern owner and businessman. Yearning for adventure, he twice sailed single-handed across the Atlantic Ocean, overcoming his disability and setting record times for the crossing.

“With a friend from Annisquam, Denny Blodgett,” Richon said “We founded Gloucester Stage Company (incorporated in 1973). It was on the floor above the restaurant and  shows started at 7 PM. After that, there were live bands. So the set had to be simple enough to quickly dismantle.”

Eventually, the company relocated to a renovated commercial space in East Gloucester. ‘We hired Israel Horovitz (1939-2020) as artistic director.” Geoff said. “He was prolific and well known with a legacy of some 70 plays and the film ‘Author Author.’ At the time it seemed like the right fit. We liked his plays. He later claimed to have founded the company which is not true. Truth is, however, had it not been for him getting us through some tough times, the company today would not exist.”

There were consistent rumors of sexual misconduct. In 1993, Bill Marx broke the story in the former Boston Phoenix. While not revealing identities, the story entailed nine women that had been assaulted. Marx, who now publishes and edits Boston’s Arts Fuse, has stated that “the story just seemed to fade away.” The board’s president, Barry Weiner, dismissed the accusations and described some of the women speaking out against  Horovitz as “tightly wound.” It was business as usual for GSC.

In 2017 allegations resurfaced in the New York Times under the headline "Nine Women Accuse Israel Horovitz, Playwright and Mentor, of Sexual Misconduct." In the spirit of Me Too Jessica Bennett convinced the women to reveal their identities and share their stories.

This time there was a different response from the company. “I apologize to the brave women who came forward in 1992 and 1993 but were not listened to,” Elizabeth Neumeier, the Gloucester board’s current president, said in a statement. “We are individually and collectively appalled by the allegations, both old and new.”

Horovitz responded “In response to questions this week, Mr. Horovitz, 78, told The New York Times that while he has ‘a different memory of some of these events, I apologize with all my heart to any woman who has ever felt compromised by my actions, and to my family and friends who have put their trust in me. To hear that I have caused pain is profoundly upsetting, as is the idea that I might have crossed a line with anyone who considered me a mentor.’

“His son, Adam Horovitz, said in his own statement: ‘I believe the allegations against my father are true, and I stand behind the women that made them.’ “

Having known Horovitz for the longest time it fell to Richon to deliver the board’s decision. “He insisted on taking me to his rabbi who I happened to know,” he said. “In his presence he swore that the accusations were not true.” They continued to be in touch but Horovitz never changed his denial.

By coincidence, we met one of his accusers, Laura Crook, during our Manship residency. She was using the space as a quiet place to work on writing and possibly publishing her experience. The Times story described her as “an actress and an understudy in a 1990 Gloucester production of ‘Strong-Man’s Weak Child,’ which Mr. Horovitz wrote and directed.”

Initially, he praised and groomed her. Then came the assault which she was afraid to report. He was, at the time, very powerful in the theater world and outing him could end her budding career. Ten years later, there was a different and more supportive paradigm when she and the other women came forward.

Proof that he was not a “founder” is conveyed by the fact that he was summarily fired as an employee. It would not have been so simple to be disengaged as a founder. The deception is a part of deeply rooted character flaw.

With his departure in 2017 the company has undergone soul searching and a spectrum of aesthetic, administrative and financial challenges. Add Covid and the past two years have been significantly difficult.

Yet Richon is sanguine for the company moving forward. “Our audience is graying out” he said in a refrain familiar to all performing arts companies “We have to develop a younger audience.”

It’s time for expansion and change. The company is no longer well served by its outmoded facility and location. “It’s impossible to park particularly if we become a year-round company. It was a mistake to move from downtown.”

He discussed the possibility of  relocation and state of the art buildout. There is a lot of new money from all those condos and a potential audience for first class regional theatre.

In addition to the arts, Richon has a broad interest in community support. He was instrumental in creating a much-needed rehab center in downtown Gloucester. The city has an epidemic level of alcohol and substance abuse.

Next time we are in town he invited us to visit his home in the vast, former studio of sculptor George Demetrios. “They were students of the sculptor Charles Grafly who taught at the Pennsylvania Academy of the Fine Arts. He, Walker Hancock, and George Demetrios all built homes and studios here. They were all close friends. The sculptor Anna Hyatt Huntington lived in Annisquam and had her studio right next to the causeway. On the other side of the causeway was a mill where I lived for awhile.”

As did my cousin, Jo Rita Flynn and her husband Michael Donahue, now both deceased. It’s all about six degrees of separation.