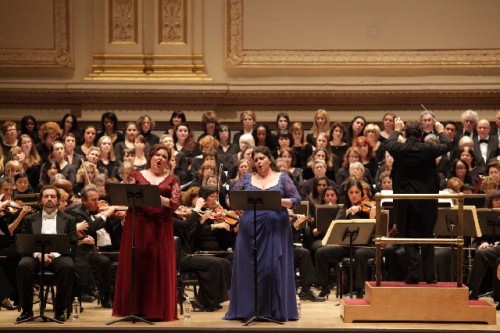 The Collegiate Chorale with Angela Meade and Jamie Barton 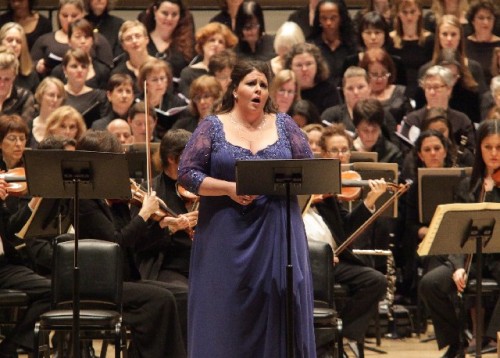 Jamie Barton, a splendid mezzo, incorporates the soprano range too. With dazzling decorations.

For the Collegiate Chorale, Bellini's penultimate opera, Beatrice di Tenda. is a perfect choice for concert performance.  Few operas deploy the chorus with such regularity and in character.  In Beatrice they speak/sing for 'the people,' 'the judiciary' among others.  The orchestra supported the singers and chorus. Lovely solo woodwind and brass moments thrilled.  While it is often said that the Beatrice plot is too complicated to stage, the opera has larger problems, despite torture and imminent death, perhaps unjust.  Beatrice is not compelling musical drama. It is full of wonderful melodies, however.

In opera, a drama can be ramshackle and artificial, a mere pretext for music, and succeed.  You don't have to wonder what happens next if the music is beautiful and emotional.  By suspending our disbelief, we are suspended in time, rapt in the moment.

There are wonderful arias, duets and trios. When you have on stage in addition to the fine Collegiate Chorale, a lineup like Angela Meade, Jamie Barton, Michael Spyres and Nicholas Pallesen, lovers of the human voice come out in droves.

The singers to a one were compelling, but standing out among her equals was Jamie Barton.   She is a Berkshire fixture.  Barton received extensive training as a recitalist at the Tanglewood Music Center, where she was a Fellow in Vocal Studies for two summers.  There she worked with such artists and coaches as James Levine, Dawn Upshaw, Phyllis Curtin, Kayo Iwama, Ira Siff, Lucy Shelton, Alan Smith, and Olly Wilson. It is no surprise to Berkshireites and to regulars at the Lyric Opera of Chicago that she took Carnegie by storm.

Barton stops time through lyric transformation.  She makes clear the power of music to do what is physically impossible.  You can't raise the stakes much higher than she does.  She transports us into an unfamiliar world of sound and spirit.

Last spring we heard her sing at the Richard Tucker career grants competition at Kaufmann Concert Hall at the 92nd Street Y.  She deservedly won a 2012 grant,

It is no accident that Sarah Billinghurst, in charge of singers at the Met, was in attendance at Beatrice. Many of her 'rising stars' were singing.  Also in the audience, Joyce Di Donato, one of today's reigning mezzos, wildly cheered Barton. Throughout the evening, Barton held us in stunned admiration.

Michael Spyres has a rich, firm voice. His top is secure and his phrasing incisive. He stood out recently in a Carnegie performance of Beethoven's Ninth.  In an interview on parterre.com, Spyres recently said: “I do find myself more at home in the bel canto style simply for the fact that one must use every tool in one’s arsenal, i.e. voix mixte, chest voice, mezza voce, and above all dynamics! Over the last decade, every country has had its own idea of what type of singer I am and which repertoire I should be singing, so you can see how hard it is for me to make my mind up on this subject. In Germany I have sung Mozart as well as dramatic Rossini. In Austria I have sung Bach, dramatic twentieth-century German repertoire, Verdi and operetta. In Italy I have sung early music, Mozart, light Rossini as well as dramatic Rossini. In France and Belgium I have sung Mozart, French Grand Opera, Bel Canto, Bernstein and more heavily orchestrated composers such as Berlioz. In the States, I’ve sung Puccini, Donizetti, Rossini, and now Bellini! Everyone has an opinion and a lot of those opinions are correct when put into the correct context."

He was in the correct context in the thankless role of Orombello.  He explains how he brings a back story to his vocal lines if the opera’s context is thin and unclear.

Meade, in the same interview, defended the plot and called the score gorgeous.  We first heard her at Caramoor singing Norma.  Caramoor is a small venue, and the conductor, Will Crutchfield, a bel canto expert.  Carnegie is big, and Bagwell conducted efficiently, but without much flair.

When the Met, without much thought to her development, catapulted Meade up, up and away after the Caramoor performance, we thought five years in Triple A may have been a more comfortable career course.  We hope this is wrong.  She was much better than Anna Netrebko as Anna Bolena, and made a wonderful Ernani, so perhaps the Beatrice was not a good night.  At first raspy, her voice caught in her throat. Difficult at best to make this hand-ringing role enticing.  Meade did not seem comfortable.  She reprises Norma in Washington in the spring, an event worth checking in on.

Nicholas Pallesen who brought down the house as Pluto, in the New York City Opera’s Orpheus.   His voice is big and wonderfully even as he deploys dynamics, which comfortably range over the spectrum. We liked him also as Storch in Intermezzo. "He is covers in The Tempest at the Met, 2012-13.  While we don't wish anyone ill, it would be wonderful to hear him in the big house sooner."

Nicholas Houhoulis completed the circle of terrific singers.  We have admired him at Bard's Summerscape and in Anna Bolena with Washington National Opera.

In Carnegie the singing filled the Hall with lovely bel canto melodies.  Always a treat.