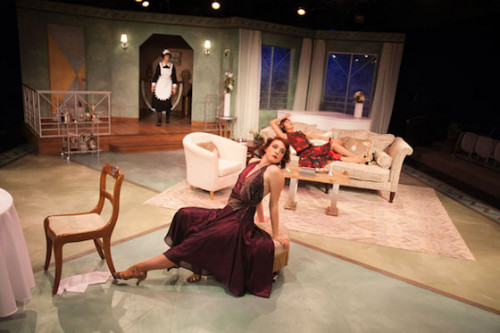 In staging Noel Coward's 1920s comedy, Fallen Angels, director Shannon Cochran has shaken it up and mixed a cocktail of '20s fun and fashion with a wink of sly gender role reversal.

Remy Bumppo's new production runs almost two hours but the time will fly as you try to keep up with the antics of Julia (Emjoy Gavino) and Jane (Eliza Stoughton), two English housewives anticipating a reunion with Maurice (Joshua Moaney), the French charmer with whom they both had "very intimate relations" before marriage. (As an aside, I wish Maurice had appeared earlier in the story so I would have had more time to appreciate his suave fashion, language and footwork.)

Fallen Angels was considered scandalous when it was first produced. In the 1920s, women certainly would not have had extracurricular affairs, let alone talk about them. When Julia and Jane learn that Maurice will visit London to see both of them, they are giddy with anticipation. They put on their evening gowns and dancing shoes, chill the champagne and wait for Maurice. Unfortunately, while waiting they drink too much champagne, get tipsy, then frolic and finally fight in Julia's living room. From beginning to end, their activities are served by Saunders, the maid, played with straight-faced impudence by Annabel Armour. Saunders, it seems, has a great deal of experience in most every aspect of life and doesn't hesitate to explain how life should be managed.

The men in the story all have small roles. Julia's husband Willy (Jesse Dornan) and Jane's husband Fred (Fred Geyer) appear early in the first act and in the second act to express indignation upon their wives' activities. Maurice, of course, makes a brief but spectacular appearance near the end of the second act. Coward was definitely defying theatrical custom by creating two leading lady roles and relegating the male characters to minor players. The character of Saunders was originally a smaller, more typical serving maid, but Coward expanded it to a prominent role in his 1950 revision of the script.

Cochran's direction is outstanding. She choreographs Gavino's and Stoughton's party with style and comic touches. During dinner, after many glasses of champagne, Jane forks up her whole beef tournedos and chews off a piece. Later, standing on a small riser, both women realize they need to sit down and plop down like rag dolls on the stair. When they fight over a telephone call that might be from Maurice, the two women perform a telephone cord tango. Period music and sound design by Christopher Kriz are a key part of the production and also highlight intermission and pre-show.

As always, Remy Bumppo makes ingenious use of their open-space second-floor mainstage at the Greenhouse Theater Center. Without any of the fly space, raised, lowered or turntable stages that larger theater companies use, Remy Bumppo mounts smartly designed, flexible sets using lighting and props to move the story. For instance, in Fallen Angels, a round ottoman on casters plays a starring role throughout the play. Credit goes to Jeff Bauer's set design and Andrew Meyers' lighting.

The fashion look of Fallen Angels is a solid representation of 1920s male and female couture. The gentlemen's golfing suits both feature knickers. Willy arrives ready to golf in a loud plaid suit and tam o'shanter. Maurice's costume is finished off with spats. But it's the women's costumes--day and evening dresses for Julia and Jane and bright blue pajamas for Julia--that really sparkle. Janice Pytel gets credit for costume design with important support from Carolyn Cristofani's gown construction and the work of four stitchers.

Noel Coward is known as the playwright of brittle, witty Roaring Twenties drawing room comedies such as Blithe Spirit, Design for Living, Private Lives and Hay Fever, which are part of the regular repertoire for theaters all over the world. Fallen Angels, a 1923 play, is not as well known and reviewers considered it vulgar and risqué when first produced in 1925 in London and in 1927 in New York. Coward was a multitalented artist--writer, actor, composer and painter--who wrote short stories as well as plays and often starred in his own productions.