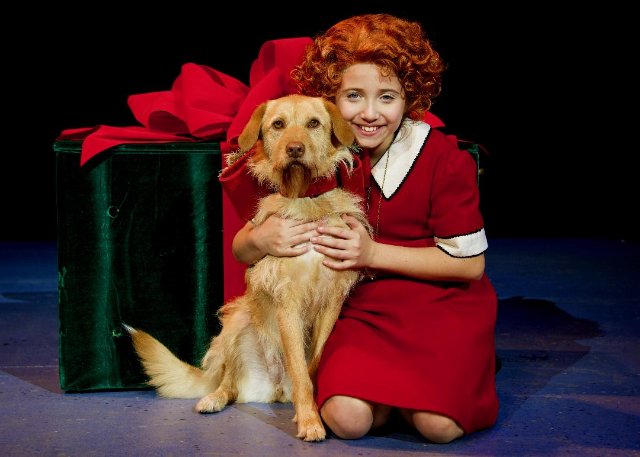 (Photo by Amy Pasqantonio) Annie (Peyton Ella) and Sandy are together at last. 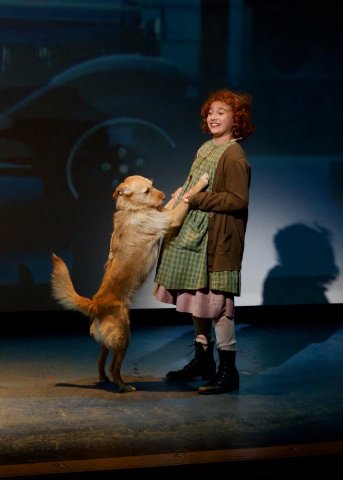 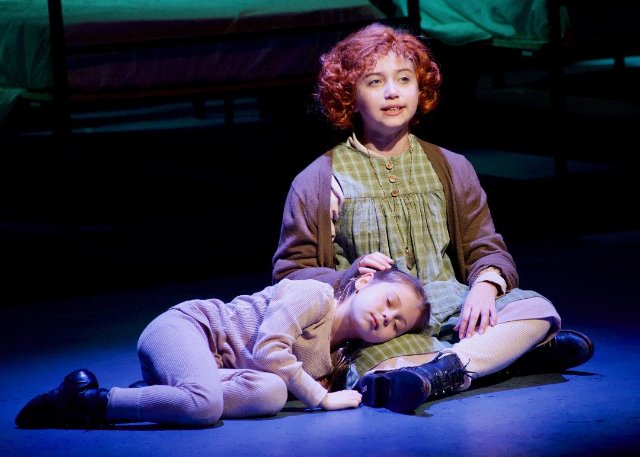 A director mounting an evergreen such as Annie doesn't have to dig deep to unearth modern relevance.

After all, the beloved musical theater classic contains practically every ingredient necessary to keep an audience emotionally invested.

And in The Wick Theatre’s current funny, sunny and touching production, director Norb Joerder and his fine cast and crew place equal emphasis on the show’s humor and pathos. Also, to their credit, the production is adorable without overdone preciousness.

While some dialogue lacks spontaneity and Josieu T. Jean includes a tad too many projections, this is an overall strong production. The late librettist Thomas Meehan, who wrote Annie's book, would be proud.

Of course, many audience members will strongly relate to the orphans, the Dickensian tale, Annie’s optimism, indomitability and her irresistible dog, Sandy.

Surely, all of this and more keeps the 41-year-old show as young and timeless as Peter Pan (the character and the show that’s his namesake).

But as you watch a production today, you notice even more the show's refreshing spirit of unity and inclusion in scenes dealing with politics.

For example, how can you not feel invigorated when Democratic President Franklin D. Roosevelt, albeit humorously, invites the staunch Republican Warbucks to sing along to the show’s most famous anthem?

“Republicans too, Oliver…sing,” he encourages Warbucks after Annie energizes them by singing “Tomorrow.”

Undoubtedly, Roosevelt’s gesture represents a welcome contrast from the divisiveness and bitter partisanship we witness daily.

Why, even when Warbucks remarks that another character is a Democrat, but nevertheless a human being, it’s a nice departure from today’s mudslinging.

Many folks might have grown accustomed and numb to such bickering. For those people, hearing a song like “Tomorrow" has to literally be music to their ears. Indeed, especially these days, we want many tomorrows to hold promise for a better world.

With that in mind, it’s a joy to hear an immensely talented youngster named Alexa Lasanta wrap her strong, controlled, expressive, sweet and optimistic voice around “Tomorrow’s” lyrics. So, those fortunate enough to have a ticket for a Thursday matinee or evening performance are in for a treat.

That’s when Lasanta plays America’s favorite female orphan. Now, this is no slight at Peyton Ella, who portrays the beloved red-headed during all other performances.

With that said, during the reviewed performance, it became immediately clear that Lasanta possesses the spunk, stamina and versatility to effectively play Annie. She’s convincingly supernova bright and joyful while she sings “Tomorrow.” Also, Lasanta is hopeful and contagiously positive during her rendition of “Maybe,” and filled with wide-eyed enthusiasm in “I Think I’m Gonna Like It Here.”

In addition,  this young actress nails Annie’s despondency. This becomes obvious when she learns, for instance, that an attempt to find her real parents failed. Further, she’s tough, protective and comforting when her fellow orphans mock one of their peers. Lasanta also thrives as a member of the ensemble, deftly capturing the urchins’ in-your-face defiance and anger in “Hard Knock Life.”

While Lasanta shines, many might itch to see the performer portraying Miss Hannigan. That would be Sally Struthers, a two-time Emmy Award and Golden Globe Award winner for her performance in TV’s All in the Family.

Throughout her long and illustrious career, Struthers has played dramatic and comedic roles. As Miss Hannigan, she demonstrates her versatility and acting skills.

At times, the actress is subtle and quietly menacing, speaking in a raspy, quiet, but frightening, devilish-like voice. It’s as though she’s yelled, and blown her whistle, one too many times, at the orphans.

During other scenes, Struthers’ Miss Hannigan seems to have gained a second wind, shouting thunderously.

With wide eyes and a facial expression that practically makes her appear senile, Struthers stumbles around the orphanage she runs. It’s clear she’s lonely and overwhelmed. It's as though she’s stuck in a place filled with insects. Surely, she must think of her charges as maggots, like another villainous woman named Agatha. That is, Agatha Trunchbull, to be precise. No doubt, Annie is Hannigan’s Matilda. At times, Struthers' Agatha Hannigan is so overcome, she faints.

But while we likely experience a sense of schadenfreude. Struthers somehow makes us briefly feel for this lonely, pathetic woman. The renowned performer imbues her with an ounce of humanity, instead of portraying her as a complete caricature. This is the case even as she spews hatred for “little girls” in the song with that title.

On the other hand, there isn’t a smidgen of hatred within George Dvorsky’s largely warm Warbucks.

Wisely, Dvorsky doesn’t turn us against his character with overdone arrogance from the outset. Rather, Dvorsky is business-like and a bit hurried in the beginning. But it’s not long before Warbucks’ tenderness, concern and sensitivity shines through. Also, Dvorsky shares a touching chemistry with Lasanta that will melt your heart. Surely, it’s a testament to Annie’s magnet-like positive effect on people that she wins Warbucks over so quickly.

Through songs such as “NYC” and “Something Was Missing,” the rangy, strong-voiced actor uncovers the character’s humanity, zest for life and sense of loneliness.

Dvorsky’s driven Warbucks further wins us over, especially as he triumphantly, with the help of his contacts, uncovers the crookedness of Rooster Hannigan (a stylish and tough Tony Edgerton) and his girlfriend (a scatterbrained Mia Matthews).

Speaking of the villains, they display nifty footwork during the razzle-dazzle number “Easy Street.”

The performers’ singing voices are strong and expressive, backed by a vibrant live orchestra that could play a more energetic overture.

On-stage performers, clad in Jim Buff’s character-defining costumes, act on sets ranging from opulent to run down. Lighting designer Kirk Bookman bathes the sets with appropriate light intensity and color. Meanwhile, the best projection reinforces the villainous characters’ desire for money. Dollar bills rain down as Agatha and Rooster Hannigan, as well as his girlfriend, sing and dance to “Easy Street.”

Of course, they represent the worst in society. By contrast, Annie’s a metaphor for optimism during a dark time, much like today.

During the “Hooverville” sequence, a “Hooverville-ite” says, “We shoulda had you on the ballot.”