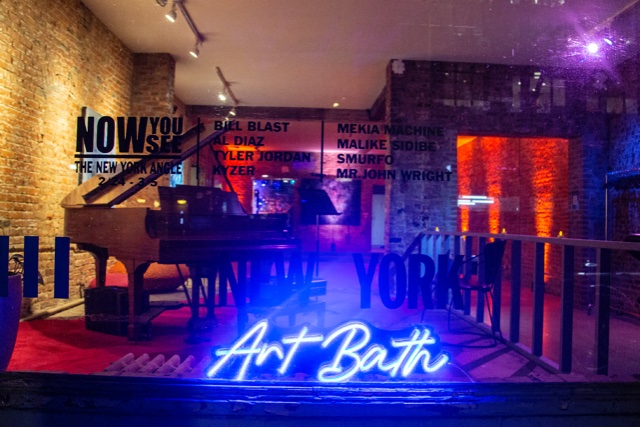 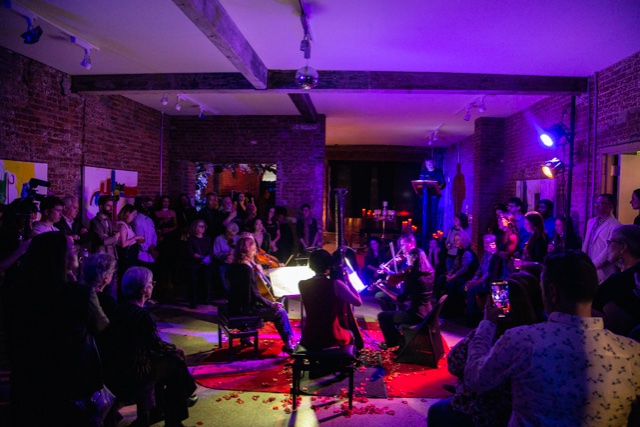 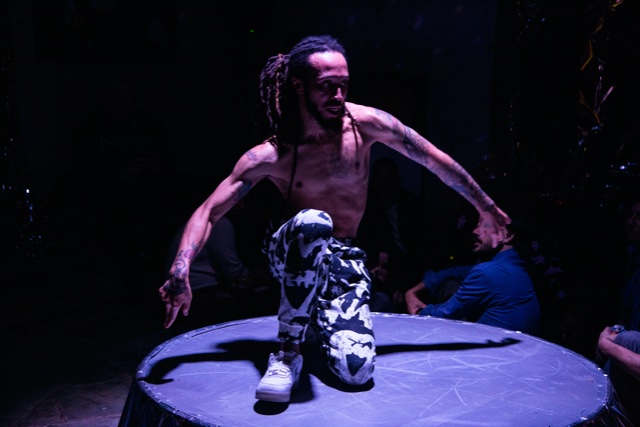 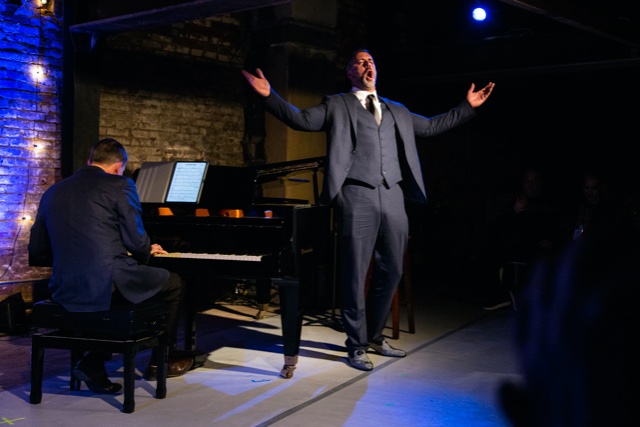 No, it's not Ezio Pinza. It's Christian Van horn with Misha Tsiganov. 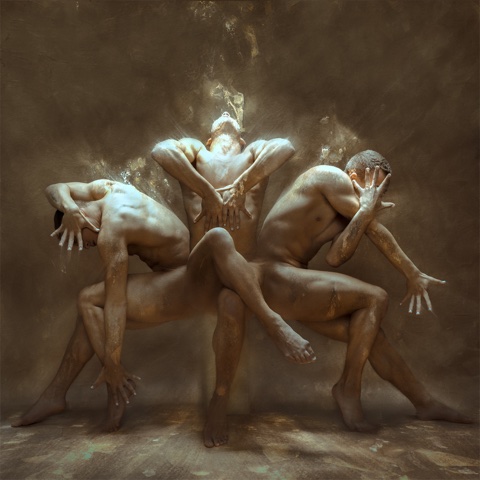 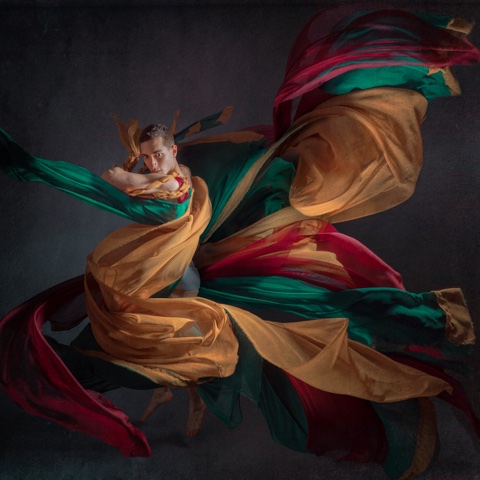 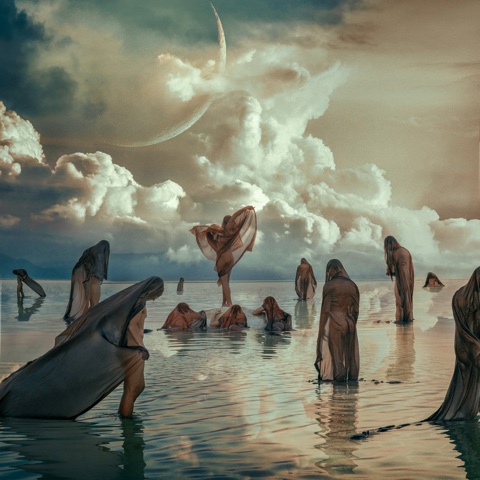 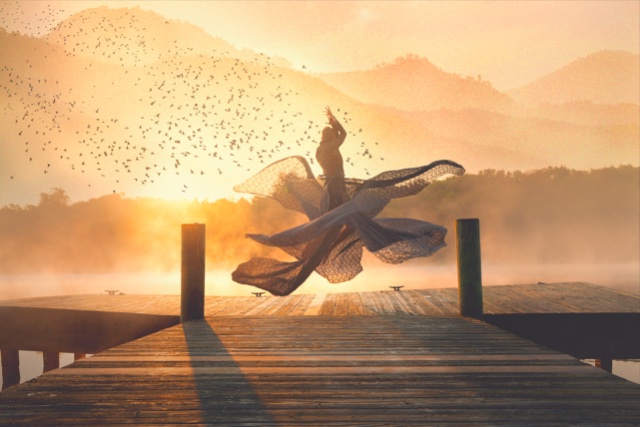 On a drawing board of mixed media, live at the Blue Building on 44th Street, Art Bath gives New York talent a chance to experiment.

Six times a year, twice in the spring and twice in the fall, Art Bath presents programs in which artists mix and match  new and daring forms.

The audience is composed of artists from many different fields and also professionals like a Spanish biotech researcher at the University of Pennsylvania and a Nike software development specialist. Everyone talks and sips wine as they move through the evening.

The last show of the fall season opened in The Front Gallery, where paintings by Justin Robinson splashed across the walls. An ensemble of musicians from the Metropolitan Opera Orchestra performed Conte Fantastique by Andre Caplet, a tone poem based on Edgar Allen Poe’s short story Masque of the Red Death. The work features the harp played like a piano keyboard by Mariko Anraku. Accompanying were two violins, viola and cello.

Caplet was close to Clause Debussy and his work as a composer is often overlooked. He conducted the Boston Opera from 1910 to 1914. Caplet was wounded in action while serving in the French Army during World War I. This derailed his musical activities.

The ensemble brought out the mystery and the beauty of Poe's story, which was intermittently narrated by Craig Bierko, most recently seen on Broadway in Girl from the North Country, and familiar to TV series' addicts as Bierko, the eccentric, drug addicted, womanizing creator of a reality dating show in UnREAL.  He was chilling as he delivered Poe’s words.

The room, an entrance area to the venue, was bathed in red light to evoke Red Death.

We were invited to move on to The Sunken Garden, where a drum-shaped platform sat in the east area. Arched diptychs awaited an electric guitar master, Guilherme Montairo, and a drummer, Bill Dobrow. On a raised stage near the restrooms, dancer Quaminae Daniels arose, captivating us with his Flexn dance as he moved  to the wild sounds filling the room.

Flexn is a style of street dance from Brooklyn, characterized by rhythmic contortionist movement combined with waving, tutting, floor moves, and gliding. Flexn dancers, referred to as flexers, often perform shirtless and incorporate hat tricks in their performance for showmanship. What fascinated about this performance was the silence of Daniel's myriad movements against the loud beats and tones of the music.

Daniel’s costume was designed by Tristan Govignon, whose paintings surrounded the garden. In the anti-room, fascinating photographs by Mati Gelman displayed dancers in frozen postures, lit like sculptures.

In the Clearlight Room we were seated more conventionally in chairs. The music by Frederick Heinrich Kern featured the glass harmonica. Chimes and repetition had the charm of Arvo Pärt mixed with Philip Glass.

A captivating dance performance by Xin Ying, a principal dancer with the Martha Graham Dance Company, moved not with the music, or even propelled by it. Instead there was a spiritual communion between the composer/performer and the dance artist which merged their work, seemingly for them and certainly for the audience. The level of comfortability creates a highly unusual union. And a brilliant platform for a multi media creation. Evocative movements included Kom, Conversation with Myself and Tatum.

We ended the evening in a nightclub. Christian Van Horn, now the go to performer in big opera for the devil and the bad guy, arrived courtesy of the Metropolitan Opera. He sang love songs "his way." Those who have been privileged to see and hear his work on the stage of the Lyric Opera of Chicao, where he originally trained in their Ryan Center, know that Van Horn not only has a glorious, powerful voice but a talent for acting. He is amusing, playful and self-deprecating, a mix that suits his roles between the devil and the deep blue sea. Accompanying Van Horn, Misha Tsiganov was a perfect partner, lofting Van Horn, and brave enough to show off his own talents from time to time.

I had waited for Ezio Pinza, and he came, yes, in Some Enchanted Evening, at the end of the set. Or almost the end, because we were encored with goodbye lyrics.

The producers of Art Bath, Liz Yilmaz, Mara Driscoll and César Abreu, emphasize building artistic community and fostering creative risk-taking. The three producers met while performing as professional dancers with the Metropolitan Opera. They noticed many of their colleagues thirsty for a safe platform to discover, collaborate and dive into artistic exploration.

“A lot has happened during the past two years,” said Driscoll on the vision behind the project. “As artistic producers, we find ourselves wanting to reconnect and galvanize conversation and experimentation. Even before the pandemic locked us out of theaters and rehearsal studios, the scale and approach of many art institutions hindered our ability to connect with our audiences, take creative risks and build community around art. Art Bath is our answer to this moment, and we are excited to dive in!”

Kom
Conversation With Myself
Tatum