The Man Who Would be King in Pasadena 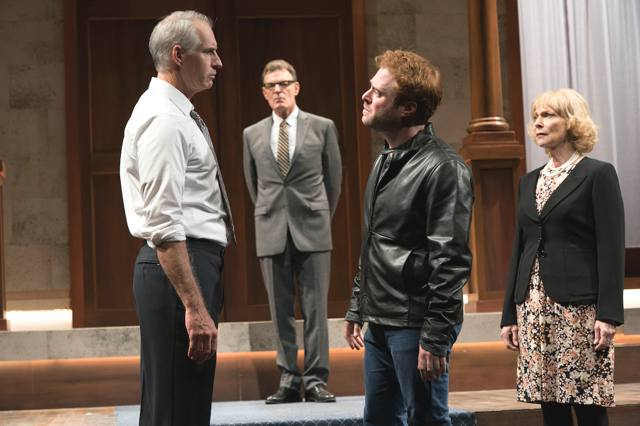 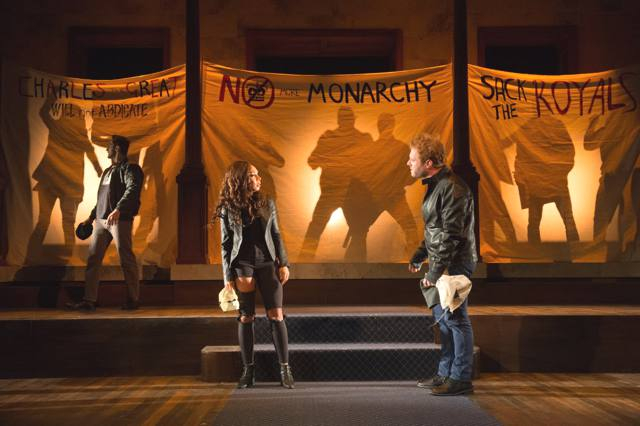 Patience it is said is a virtue. If that is a truism then Prince Charles, son of Queen Elizabeth II must be a saint. Charles, Prince of Wales, has been first in line to become England’s King for sixty-five years; longer than any other heir in United Kingdom history – which goes back to the reign of William the Conqueror, in 1066.

But all that changed in 2014 when British playwright Mike Bartlett penned his controversial, fantasy/fictional play “King Charles III”, which Bartlett labeled as a “future history play”. After all, Queen Elizabeth II at age 91, is still firmly ensconced on the throne.

“King Charles III has some of the Shakespeare-like quality of the text that combines verse and modern vernacular, make this intriguing production directed by Michael Michetti, a provocative evening in the theatre that is resonating with audiences on both sides of the Atlantic.

NY Times’ senior theatre critic Ben Brantley put his stamp of approval on the New York production going onto say “…the play is a dazzling presumptuous drama … a flat-out brilliant portrait of a monarchy in crisis.” After seven seasons of the blockbuster TV series “Masterpiece Theatre” on NPR, there are a lot of Anglophiles in America and a sizeable number of them live in Southern California.

The play begins with a procession of mourner/singers coming down the playhouse aisles on their way to Buckingham Palace following the funeral services of Queen Elizabeth II. The scene is one of muted pomp and circumstance. Prince Charles (Jim Abele) is now technically the King, but is yet to be crowned in ceremonies at Westminster Abbey. The story explores the events that confront the new King, and the Royal family: Duchess Camilla (Laura Gardner), Prince William (Adam Haas Hunter), Duchess Catherine (Meghan Andrews), Prince Harry (Dylan Saunders) await to see what the new king and his advisor Reiss (Mark Capri) and his Prime Minister (J. Paul Boehmer) and Parliament have planned for the country and its subjects.

Prince William and Kate, the Duchess of Cambridge, have plans to ‘assist’ King Charles in his quest to insure that most of the old laws are observed and not modernized too much. The king’s enemies consider him to possess the brain of a Brussel sprout, and believe him to be incapable of being the monarch. His prime minister and his cabinet ministers will not support him or his ideas, instead they plan on installing Prince William as a Regent-King.

Charles resists his ministers by refusing to sign the “Ascendency Act” that would transfer some powers away from the monarchy to parliament, along with restricting the freedom of the Press. His continuing refusal to sign raises the issue of a constitutional crisis under English law. All of the events unfolding in this fictional tale, has a familiar ring to it for Americans. The opening night audience seemed to get this ‘ripped from the headlines story’ right from the get-go, laughing at some of the dialogue in places where laughter wasn’t exactly the appropriate response – it felt like I was listening to nervous gallows humor.

Jim Abele delivers a solid performance as the flawed, moody, misunderstood Charles. Laura Gardner’s Camilla has the right amount of pathetic, ditzy behavior along with her tossing non-sequiturs to amuse everyone – the characters as well as the audience.

Adam Haas Hunter’s Prince William, at first, appears to be a bored player merely waiting for the appropriate moment to embrace the plan hatched by the Prime minister and parliament to make him Regent-King. It’s a nice, nuanced performance, and along with wife Kate, the young Royal pair begin to relish the thought of becoming King and Queen of England. There’s enough palace and parliamentary intrigue taking place in this production to satisfy all fans of such storylines.

Prince Harry (Dylan Saunders), is the outlier in this Royal family. He’s independent, lives by his own rules and is harboring the thought of becoming a commoner in order live with his cockney-accented political activist girlfriend Jess (Sarah Hollis).

The staging of the production by director Michetti, gets static at times with characters standing in a line. Also, the didactic approach in Act I of setting the characters in motion seemed a little unnecessary. American theatre-going audiences are pretty savvy when it comes to appreciating British history and the execution of its theatrical stage craft production excellence.

The real beauty of this production lies, not only in the ensemble cast’s talent, but also in the expertise of the creative team led by director Michetti. The wide expansive playing area provided by Scenic Designer David Meyer allows Michetti, to stage scenes on more than one level. The Lighting design by Elizabeth Harper creates the mood moments required by the narrative and the text especially in the Coronation scenes.

The costumes, wonderfully designed by Alex Jaeger, are visually stunning. It would take an experienced eye to determine that the ermine-robed, on stage characters, with their crowns and tiaras and jewels aren’t the real deal. Everything just sparkles with authenticity. No one does English period pieces better than the Brits.