Amahl and the Night Visitors Reimagined 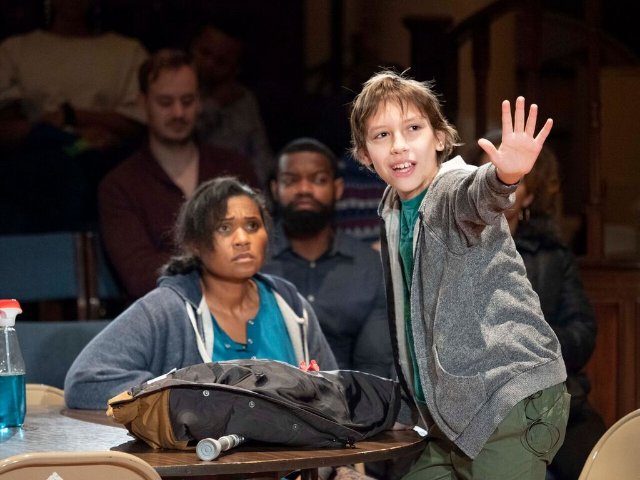 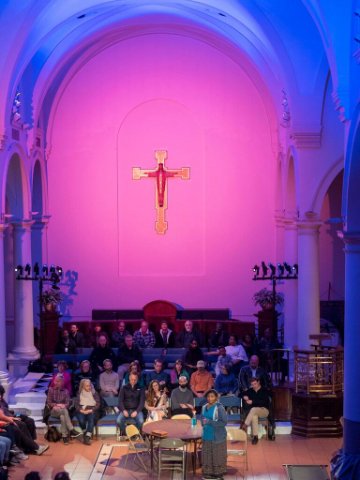 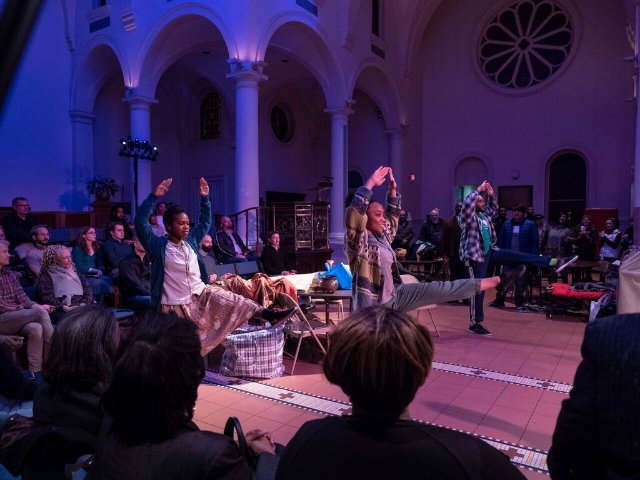 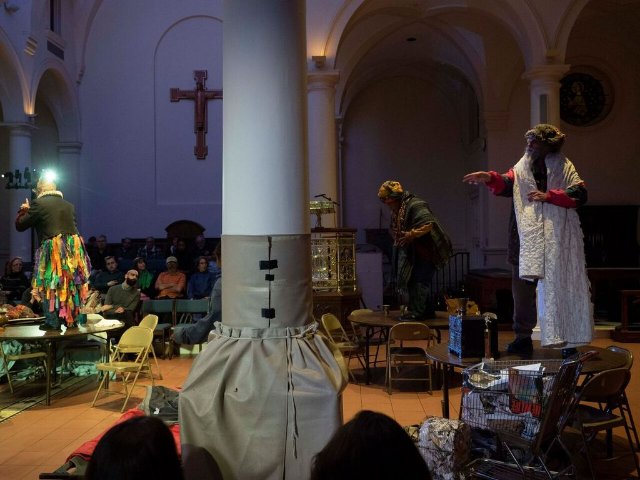 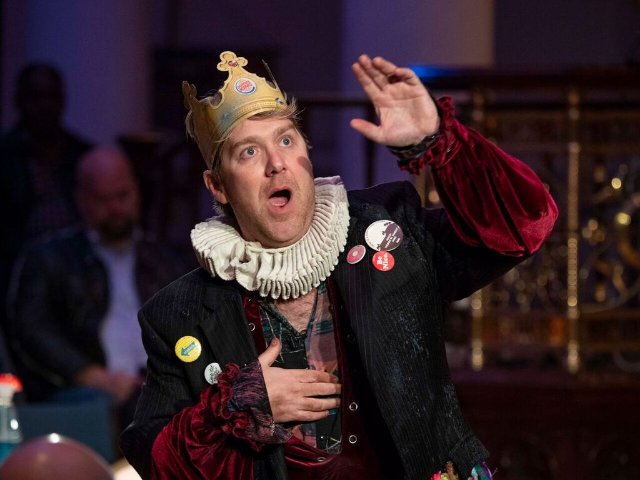 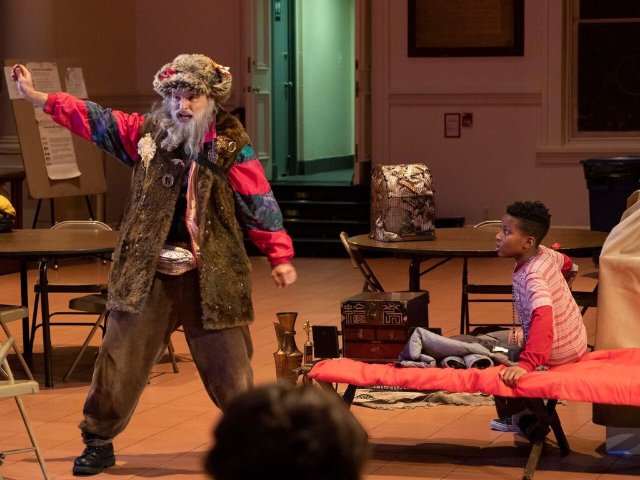 Joseph Gaines, a wild and wonderful Kaspar. He sings with bravura and style. 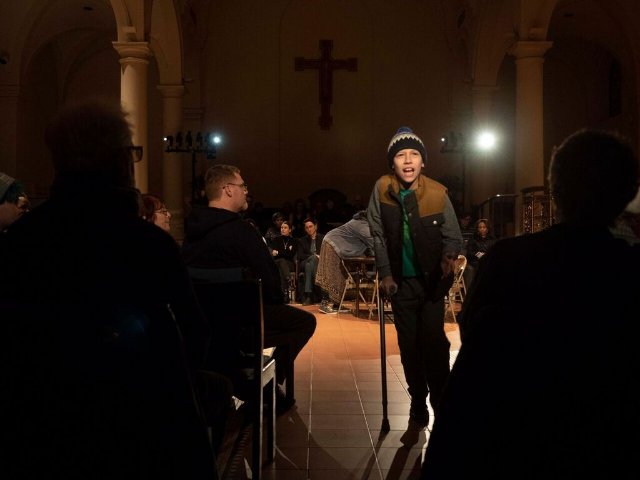 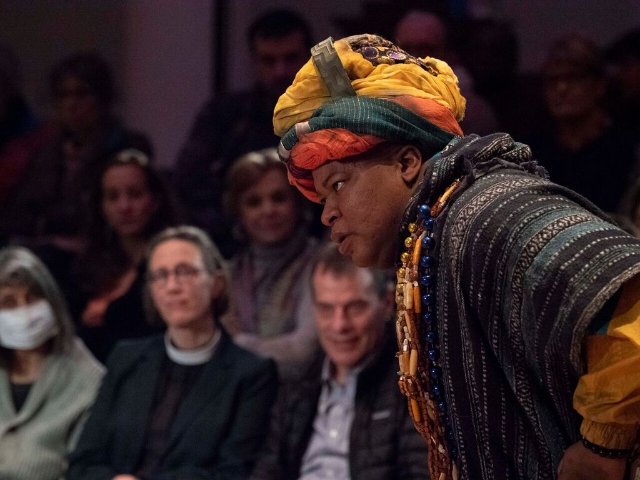 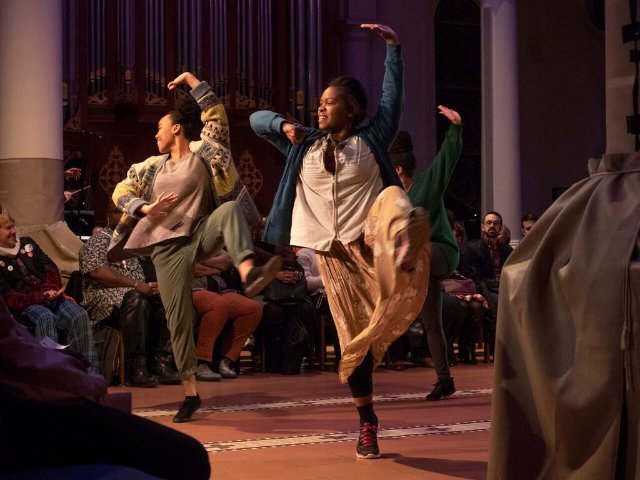 Amahl and the Night Visitors was commissioned as a Christmas television special a half century ago.  The composer, Gian Carlo Menotti, would appear often at its live presentations.  At the conclusion of his opera, he would tell the audience that this was the story of a boy who had problems with his mother.  He then asked, "How many of you have problems with your mother?" and every hand shot up.

OnSite Opera presents a 21st century take on the opera. Amahl is in the largest soup kitchen in New York, Holy Apostles.

Eric Einhorn, recently named a professional of the year by Musical America for his innovations, and independent thought, is the General and Artistic Director of OnSite.  His notion was to present opera free to an audience.  We were invited to bring food for the soup kitchen as the price of admission.

Inside the church, the nave was filled with both choir and audience. The orchestra was tucked into its own section up front. Conducted by the gifted Geoffrey MacDonald, the demands of this unusual space and positioning of the soloists and choir were managed to provide a wonderful acoustical environment.  MacDonald appears with Opera Philadelphia and is a regular at Wolf Trap. In this age when all musical institutions are experimenting with new venues, MacDonald is a go-to conductor.  He meets challenges with seamless musical presentation.  His magic worked in Amahl.

You can guess the conclusion of the story in which are poor mother and her crippled son are visited by three strangers from afar, all kings.  Aundie Marie Moore sang the mother with a big voice, full of feeling.  Each of the Kings brought a special touch to his role. Joseph Gaines, who made an indelible mark in Elizabeth Cree at Opera Philadelphia, was Kaspar, with a scraggly beard, a light step and an impish gleam to his eye. Musa Ngqungwana was imposing as Balthazar. Singing next to our ear from time to time, an unusual and delightful perspective, Daniel Belcher caressed the notes of Melchoir.

The young boy Amahl was performed by Luciano Pantano, a chorister from the neighboring Church of the Transfiguration.  His voice was lovely and pure, and hesitant when he quarreled with his mother and firm in her defense. She has been tempted by the gold of the strangers who she is housing, and her son Amahl will not have her reprimanded.

The choir was made up of a mix of neighborhood and professional voices who Michael A. Ciavaglia brought together with a piquant joy.

Arturo Toscanini conducted the opera's premiere. He thought Menotti had outdone himself. Now Einhorn and Onsite have outdone themselves in presenting the opera in a most contemporary setting. This should be an annual occasion for Onsite and the soup kitchen.