A Lively Collection of Essays 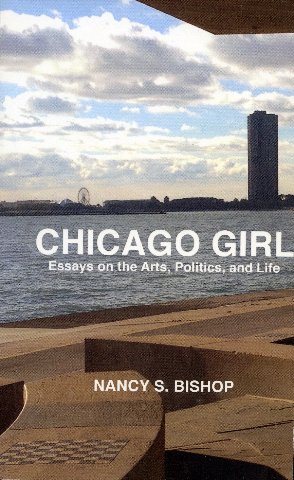 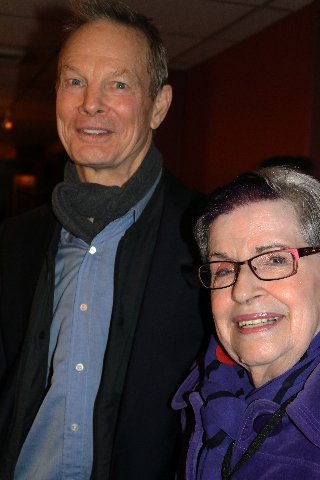 Nancy with Bill Irwin who she introduced during an ATCA Lunch at Sardi's. Giuliano photo.

During a career, from which she retired in 2012, Nancy S. Bishop had a number of full time writing positions. These ranged from speechwriting, corporate ghost writers, to PR or marketing manager. She has worked for two major universities, several large corporations including Kentucky Fried Chicken, and professional services firms.

With a sufficient nest egg she is in a position to turn down the occasional free lance or consulting gig. Now she writes every day but to please herself.

To some extent it’s in her blood. Her father ran a small printing firm which made the transition from letterpress to offset printing. As a female she was denied enrolling in the high school print shop. But she worked on the school newspaper and became its editor. That led to a master’s degree in journalism.

Through persistence she managed to get some basic training in setting type. That spawned an interest in typography. Which fed into a love of books and learning. Her best school chum was a fellow bookworm. She continues to be an avid reader.

Some chapters of this anthology of essays discuss authors, poets and playwrights. She is particularly keen on supporting the readings and works of young Chicago poets. Some of whom she has mentored.

What comes through is a great range of interests which might better be described as obsessions. When she takes an interest in someone or something, from author or playwright to musician, she dives in head first.

Having been raised mostly listening to safe Top Forty she got interested in Bluegrass when, during a year and a half working for Kentucky Fried Chicken, they sponsored a Bluegrass Festival which she was involved with. What’s not to like about that? When the company was sold that project ended.

Then, be still dear heart, along came Bruce Springsteen. She has attended some 30 plus performances. Some of which she has traveled to with her nephew. As Nancy writes no two concerts are alike and she defines the big, mostly polite ones, as well as those in smaller venues with more fanatical fan participation. In particular, she enjoys and differentiates the stories he weaves into sets.

I first learned of this commitment when I was surprised that she had sprung for a coveted and expensive ticket to his Broadway one-man-show. We were content with the Netflix version.

That she is such a die hard rocker came as a surprise to me. We met several years ago while attending a New Orleans conference of American Theatre Critics Association. She is a proper and understated septuagenarian. I am certainly less so and a bit older. A chunk of my career was spent as a jazz and rock critic. Our experiences to be sure have been similar but different.

What I most appreciate about Nancy is that she always posts “clean copy.” That entails virtually no proof reading or editing on my part. The range of what she submits is formidable. The first love is theatre and Chicago, with over 200 companies, is a great town for that.

The Windy City is also renowned for architecture and design. The book reveals that she studied to become a docent and conduct tours of art and architecture. She submitted landmark reviews of exhibitions of Bauhaus. Exploring the work of Frank Lloyd Wright has entailed travel and critical analysis.

The spine of this insightful and very personal book describes growing up in Chicago. We get a sense of her working class neighborhood and how that means being a Cub’s fan. As a kid she described attending games when mothers and daughters got in free. The tradition was to come with picnic baskets. As she grew older Nancy paid less attention to the food and more to the game. Actually, she had previously rampaged the baseball section of the library. It’s typical of her to discover the sport through first reading about it.

Several years ago, when a blog folded, she helped to found Third Coast Review. It’s a great resource for the arts of the city. Of which there has not been that much in the past year of Covid.

This book, her first, is a manifestation of how she had refocused. It will be some time before we get back to theatre, travel, sports and dining.

That’s why her diary entries for a month in New York, a couple of years ago, proved to be so poignant. I was also in the city for one of those weeks and saw some of the shows that she attended and wrote about.

We also have mutual ATCA friends. In particular, I was intrigued by the entry that describes an evening when she was invited for dinner in the small, cluttered, two-bedroom pad of the famous critic and raconteur Fast Eddy. She described how it was packed with books, memorabilia and works of art. Typically, he served a gourmet meal. I have never had the pleasure but have had “cocktails” with Fast. Nancy, I’m green with envy.

Everyone who knows Nancy has a friend for life.

Which is why the last chapter is so poignant.

After two children, and 25 “mostly happy years” she divorced. Then in her forties, she endured dating. Several men and their eccentricities are succinctly documented. Then came the kicker. A former State Senator he was a cut above the pack and perhaps more sincere. He offered marriage which entailed packing all her stuff off to his manse in the burbs to be a wife in a country club life.

As a “lefty,” and card carrying member of the ACLU, she “wouldn’t be caught dead on a golf course.” Although I am sure he has his charm.

The book ends with a scathing poetic rebuke of the offer.

As a stanza proclaims:

”Don’t drag me to the suburbs, please
Don’t buy me a big car or call a mover
Don’t lead me astray on the freeway of love.
I’ll take the CTA or an Uber
Can’t you see that I’m a city lady?
Don’t wanna be a country girl.”

I wonder if Nancy sent him a signed copy of the book? It must have taken chutzpah to turn down “The Senator.” Maybe she just didn’t like his politics.