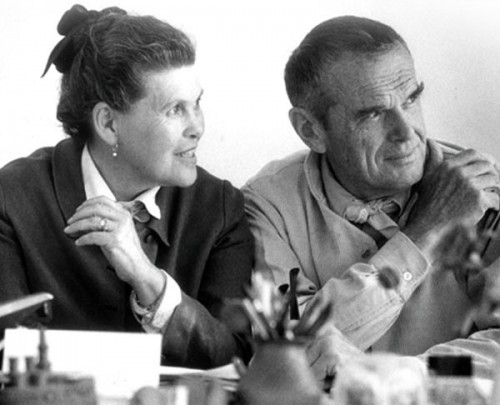 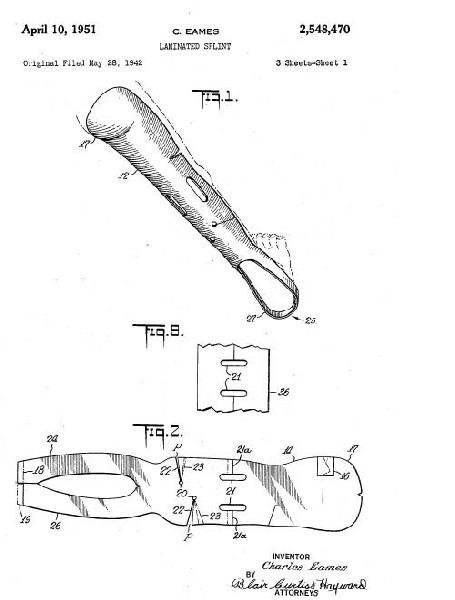 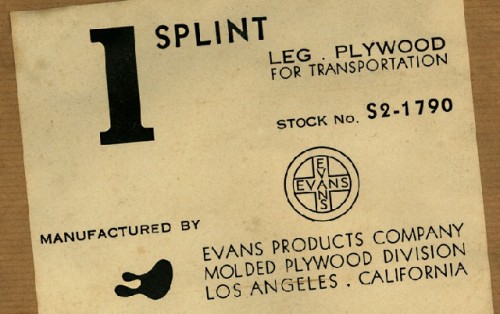 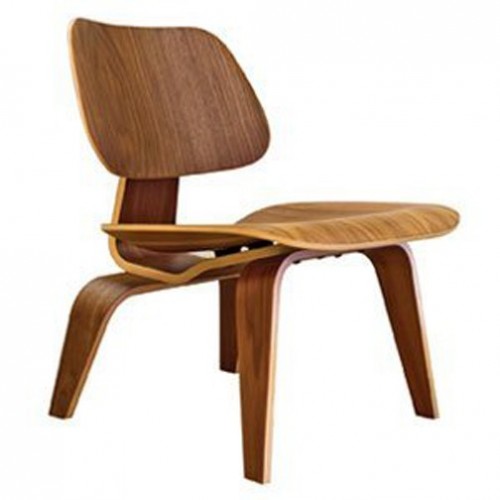 LCW Chair by Charles and Ray Eames, 1941, moulded plywood, Manufactured by Herman Miller , called "the chair of the Century" by Time Magazine in 1945. 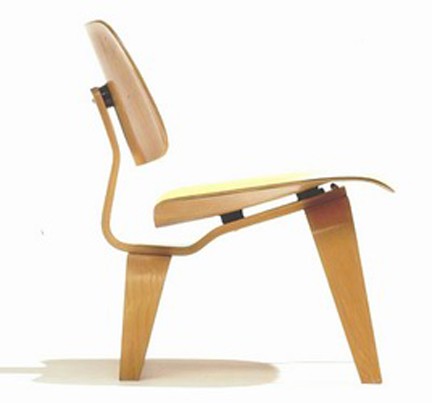 Side View of LCW Chair by Charles Eames. 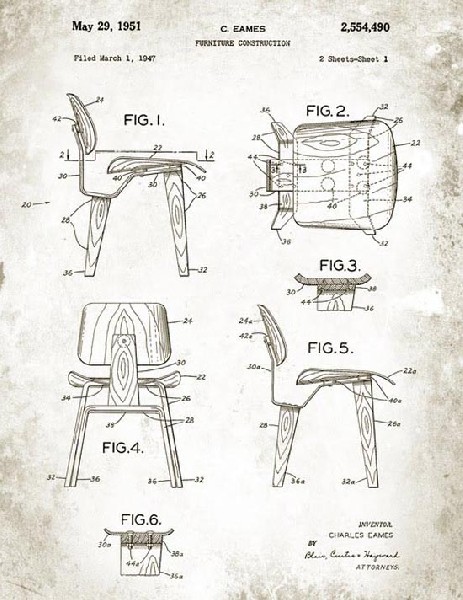 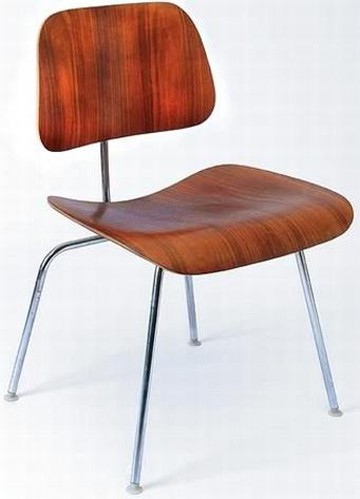 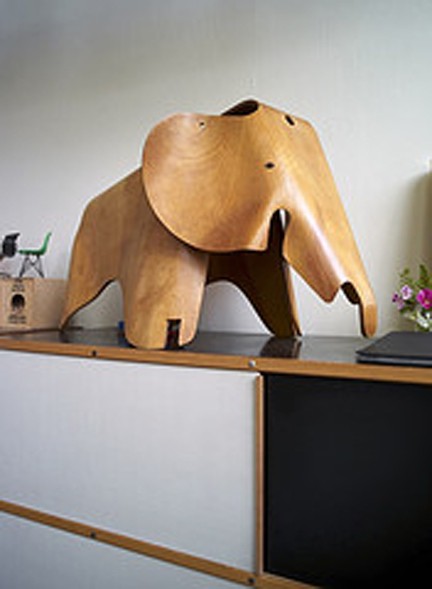 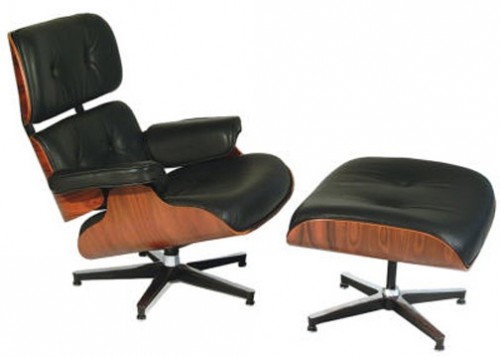 The humble leg splint put in the hands of design genius to reconfigure led to a new way in which furniture was thought about and made. This design led in a large way to Mid-Century Modernism.

At the beginning of World War II, the War Department almost immediately saw the need for a lightweight splint to be created. The existing leg splints were made out of metal, and they would vibrate when carried on a stretcher causing additional pain to the wounded. The U.S. Navy commissioned Charles and his partner/wife Ray Eames to create a light, inexpensive leg splint.

Earlier in 1940, Charles Eames had partnered with his friend architect Eero Saarinen to create a chair of molded plywood. Though failing to make it suitable for mass-production or even very functional, they had to upholster it to cover up its flaws, they won the Museum of Modern Arts' "Organic Design in Home Furnishings" competition. It looked better than it sat.

Through this "failure," Eames never again started a design by what it was to look like but instead each future destign was started by how it was to function. When the U.S. Navy commissioned Charles (1907-1978) and Ray Eames (1912-1988) to solve the splint problem, previous years' exercises of trial and error led to the creative answer.

The design problem needed to be overcome was how to create compound curves that would stay flexible and not splinter while being lightweight and strong.

Having access to military technology and manufacturing facilities, the Eameses and their team of designers were able to perfect their technique for molding plywood. The final product had a three-dimensional, biomorphic form. Ultimately, the techniques used in developing the leg splint led directly to the Eames' subsequent, highly influential molded plywood furniture designs.

The Eames leg splint elegant design object is a highly sculptural yet functional device. The organic, flowing form is at once streamlined yet extremely practical integrating into the design openings for bandages and strapping. It could and would be mass-produced, and since it was modular, it could be transported efficiently.

The 1942-43 Molded Plywood Leg Splint manufactured by the Evans Products Company is now a design icon. The sculptural element is now highly collectible by both design nerds and serious art and design collectors. One is in the collection of the Metropolitan Museum of Art among other great museums.

One of the most fascinating attributes of the leg splint is that it was a utilitarian product that has been elevated to a piece of practical sculpture. Its form is at the juncture of art and design. There is no reason for the splint's elegant beauty other than the skill, taste and creative inspiration of the Eames genius.

A modest leg splint as sculpture? A leg splint as even an artifact not to say piece of art? Ridiculous in concept; sublime in execution. Use of materials is part of the magic of its object resonance and even radiance.

Another part of the wonderful quality of the humble object is it is surprisingly dignified and therefore special grace. Flowing lines, almost ribbon-like that accentuate the materiality and surface of the plywood reinforce the strength of the structure and crisp silhouette of the piece.

Even its name, the molded plywood leg splint, sounds non-aesthetic. But it is a transcendent object. It is quite simply iconic.

At roughly the same time, the Eameses were working on moulded or "bent" plywood that would fit the contours of the body as chairs. The eventual  construction of the first nominal Eames chair was a quest to make a single piece shell chair that that was also capable of mass production. The one piece effort in plywood never quite happened, but the multipiece chair versions turned out brilliantly.

Eames chairs became a design object of desire almost as soon as they were presented. In 1945, the LCW chair would be called by Time magazine "the chair of the century." Manufactured by Herman Miller, they called it "the most advanced furniture being produced in the world today." Charles and Ray went on to design chairs over the next few decades that sold well continually and underscored Mid-Century Modernism.

Literally redefining what a designer was during the 1940s through the 1970s, Charles Eames is known for his brilliant rethinking of architecture, furniture, exhibits, films, corporate brands, cameras, toys and practical objects. Though less credited, Ray was his main collaborated. Together they transformed a dull modernism to a vibrant often colorful design theme.

Charles Eames, Jr. was born and raised in St. Louis, MO. After two years of study, Charles left the architecture program at Washington University to practice architecture on his own. He never finished college and never received his architectural license. After a few years of practice, always interested in furniture design, he was invited to teach and head up the industrial design department at Cranbrook Academy in Bloomfield Hills, Michigan.

Ray Kaiser Eames was a painter who studied in New York City with the great colorist painter Hans Hoffmann. Considered one of the earliest American abstract painters, she brought a painter's eye to the Eames collaboration. She then moved to Cranbrook Academy to complete her painting studies and eventually teach. There she met and fell in love with Charles Eames.

However, Charles was already married and was a father. Ray moved away from Cranbrook. Eventually, he left his wife for her, divorced and quit his teaching job at Cranbrook. The couple moved to Venice Beach, CA and set up their design studio. For the rest of their lives they worked out of the Venice studio. Besides their furniture designs, their major clients included Westinghouse, IBM, Polaroid and United States Department of State.

After WWII, with strong consumer demand, the chairs and other furniture that the Eameses designed began to appeal to educated, upper middle class families moving to the suburbs. Their chairs were particularly popular.

The LCW (Lounge Chair Wood) Chair was a direct result of the molded plywood splint experience. Through extensive experimentation, Charles and Ray arrived at an alternate solution to a one piece or single shell design: to create two separate pieces for the seat and backrest. The two pieces would be joined by a plywood lumbar support and have plywood legs. The result was a sleek, modern-looking comfortable chair.

The seat was joined to the lumbar support and legs with a series of four heavy rubber washers with screws and nuts embedded in them called "shock mounts." The shock mounts were also glued to the underside of the seat, and screwed in through the bottom of the chair. The backrest was also attached with shock mounts. The rubber shock mounts allowed the backrest to flex when the chair was occupied. This was one of the first chairs ever made with a responsive backrest.

Following the creation of the LCW, the Eameses created an extended family of plywood chairs. The Dining Chair Wood (DCW) was constructed in the same way as the LCW, but with a narrower seat and longer legs. The Lounge Chair Metal (LCM) and Dining Chair Metal (DCM) were constructed of the same plywood seats and backrests as the LCW & DCW but were set on a welded metal frame with metal legs.

The large Eames Lounge Chair and Ottoman were first manufactured for sale in 1956 with its novel five point base. It has become known as a classic example of mid-century modern furniture design as well as one of the most comfortable and elegant chairs ever made.

The rich veneer and supple leather suggest old-fashioned luxury translated into a modern form. It also incorporates molded plywood. Like most of the Eames designs, it is still produced by Herman Miller.

Besides furniture the Eameses also designed in 1945 a menagerie of plywood animals for his daughter Lucia. They were sculptural enough to be decorative but sturdy enough to support a small child. But none of the creatures—elephant, frog, seal, bear, and horse, went beyond concept stage.

In 2007 to commemorate Charles Eames' 100th birthday, a "plastic version" elephant was started to be produced by Vitra along with a smaller scale model molded wood version. A limited edition (1000) of molded maple plywood childsize elephants were manufactured in Germany by Vitra starting in 2007 as well.

Though only one of the many brilliant designs created by Charles and Ray Eames, the Eames splint is a prime example of pragmatic aesthetics. A recent film, Eames: The Architect and Painter by Jason Cohn (2011, 82 min.) tells the story of the husband and wife team's collaboration. In the documentary, the splint is discussed by their grandson, Eames Demetrios.

Now 70 years old, the Eames Molded Plywood Leg Splint would have been a significant contribution to design history by itelf. Its creation was a strategic technical design breakthrough that led to a generation of equally celebrated chairs and furniture. Humble in origin, it is now a design icon.