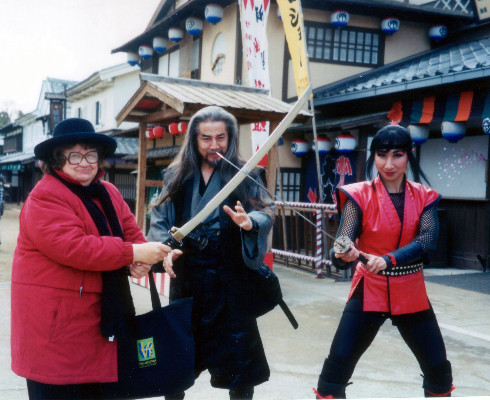 Sandy was a gay blade in Kyoto. 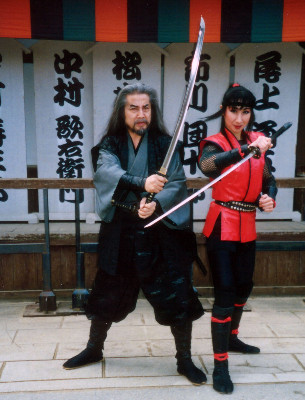 On a movie set. 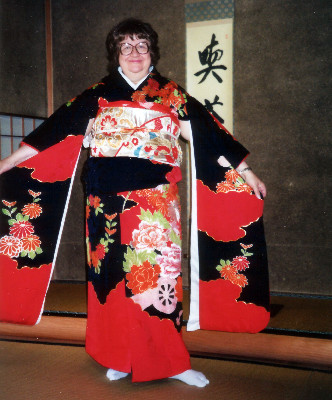 Dressed for the tea ceremony. 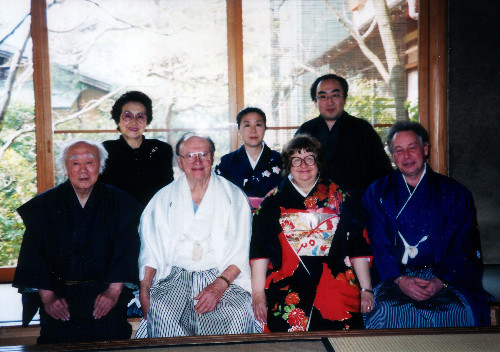 Japanese and American guest at a traditional tea ceremony.

However difficult it is to envision today, legendary samurai warriors once waged bloody battles on Kyoto streets. In the museum of Kyoto, you can see painted scrolls depicting sword fights and bands of costumed crusaders parading along Sanjo-dori displaying the freshly severed heads of traitors.

The prime duty of a samurai was to give faithful service to his feudal lord. The origin of the term samurai is linked to a word meaning “to serve”. Over the centuries, the samurai established a code of conduct which came to be known as the way of the warrior. This code was drawn from Confucianism, Shinto and Buddhism.

Confucianism requires the samurai to show absolute loyalty to the lord, toward oppressed to show benevolence and exercise justice. A real samurai had endless endurance, exhibited total self-control, spoke only the truth and displayed no emotion. Since his honor was his life, disgrace and shame were to be avoided above all and insults to be avenged.

From Buddhism, the samurai learned that life is impermanent, enabling him to face death with serenity.

Shinto provided the samurai with patriotic beliefs in the divine status both of the emperor and abode of the gods.

Ritual suicide was an accepted means of retaining one's honor. One reason for this ritual was the requirement that a samurai should never surrender.

The samurai wore leather or lacquered steel armor in battle covering his whole body. He used bow and arrow along swords and dagger. Generally he was mounted during battles.

During both war and peace a samurai tried to tranquility within himself through meditation in a private garden or teahouse.

A samurai possessed a highly developed sense of beauty. Many pastimes helped him to find serenity away from the battlefield.

With rituals for preparing and serving tea to a guest this was an important pastime. It required great calm and concentration. My experience at the tea ceremony was enhanced by wearing a traditional embroidered kimono. The Women’s Association of Kyoto provides these opportunities to visitors. www.wakjapan.com

Atsuka led the tea ceremony. She explained all the details of behavior and introduced the family in whose specially designed home we were being entertained. The elements of respect, purity and tranquility were apparent as the Tea master prepared the hot water and then ceremonially made the tea from finely powered, green tea served in ceramic bowls. One sweet treat accompanied the tea. We sat on the floor sipping tea circulating the cup correctly with bows of thanks.

It was at KYOTO STUDIO PARK TOEI MOVIE LAND where I met the samurai Lee Murayama who had his own website: www.lee-murayama.com . He was an actor in “The Last Samurai,” starring Tom Cruise, which was filmed in Kyoto. Lee was dressed or parts he plays in Japanese movies and television shows including ones with a lady Ninja. You can visit this studio, and home of Japanese movies. This is the only theme park in Japan where visitors can observe the filming of period dramas. It is where history is kept alive. www.toei-group.com.jp/eigamura

There are lots of free things to do in Kyoto among which is entering the grounds of many of the 1,600 temples and 400 shrines. One of the most interesting temples was CHION-IN TEMPLE particularly because it was used in the shooting of “The Last Samurai”.

It was also my favorite because we enjoyed a personal guided tour led by Rev. Yuki Yamamoto, who looked like the founder Honen. A special treat was having tea with him and hearing about his Western-educated children living in California. He walked around the temple with us taking many pictures with his superb camera.

This temple was constructed on the orders of the Priest Honen in 1175. The temple’s huge Hoji hall can seat 3,000. Among the temple’s interesting sights are the Sanmon Gate, the biggest in Japan with a huge bronze bell which requires 17 monks to ring. What a fabulous National Treasure!

At KITANO-TENMANGU Shrine the SETSUBUN (coming of spring ceremony) was being celebrated in dramatic –style. The colorful ritual is the most important festival of spring. Men in demon masks ran around the stage while soy beans were thrown at them. This symbolizes people chasing out demons out of their homes by throwing soy beans and shouting “Demons out, good luck in”.

After the show, the cast threw peanuts into the audience for people to have good luck.., throwing them out when they get to their homes. The children had so much fun running around to catch and gather peanuts.

NIJO CASTLE was interesting to visit because its garden blooms all year. It is also a National Treasure and World Cultural Heritage Site built in 1603.

THE KYOTO NATIONAL MUSEUM was founded in 1895 as an imperial repository for art and treasures from local temples and shrines. There are 17 rooms with displays of over 1,000 artworks, historical artifacts and handicrafts such as: ceramics, textiles, sculpture, lacquer ware, metalwork, paintings and calligraphy.

KODAOJI SHO MUSEUM is a small museum of cultural treasures associated with Kitanomandokoro Kodai-In (1549-1624) the foundress of the temple Kodai ji notable for its lacquer ware.

Eating and drinking is an art form in Japan. At the OISHI SAKE BREWERY in the outskirts of Kyoto we watched brewers make sake in big vats. The employees dressed in green jackets on which calligraphy in Japanese said happy. The president Hiroshi Oishi invited us to have tea and taste sake. He introduced us to many items made from sake. He gave me a happy jacket.

There were many outstanding dining experiences. Each morning at our hotel, Westin Miyako/Kyoto, there was a elaborate breakfast brunch that satisfied my American taste as well as having many Japanese delicacies to try.

MISOGI-GAWA-French Kaiseki was the restaurant that served nouvelle French cuisine for the past 23 years utilizing the best of Japanese style and ingredients. In all my dining adventures, it was presentation, presentation, presentation! This restaurant was located in a century-old renovated wooden building that once belonged to a geisha, Misogi Gana. All staff wore kimonos and spoke English. It’s a great place to splurge. My special fillet steak of “Ohmi beef” with fondant potatoes was memorable.

The best tempura was at Tenki Restaurant. All the  dishes were cooked in front of us.

Then there was JUNSEI, the tofu restaurant www.to-fu.co.jp . We had tofu simmered in an earthen pot and we skimmed it off the top.

THE GARDEN ORIENTAL restaurant served the most delicious authentic Italian cuisine in a garden setting within the view of Higashiyamo mountains. We went for the spaghetti with meat sauce. It was a welcome change from raw fish.

When we visited NISHIKI MARKET we enjoyed lunch at a restaurant that catered to locals. It was fun food and not expensive. This market is the place to visit if you are interested in seeing all the weird and wonderful foods they cook in Kyoto.

The daring men in our group enjoyed an open-air-bath in a secluded spa in the mountains at Hotel Sumiya kiho-an info@sumiya.ne.jp

Our accommodations at the Westin Miyako/Kyoto lived up to acclaim as one of the city’s finest . Here tradition & modernity met harmoniously. It is perched on the mist-shrouded foothills of Mount Kocho and overlooks the grand capital of Kyoto. This is a fascinating and well preserved ancient city, whose history spans more than 1,000 years. Kyoto has been a political capital, renaissance city, a spiritual center and battlefield. Yet through the ages, miraculously, most of the temples and landmarks have remained unscathed. Today they offer the visitor a rare insight into Japanese culture. www.westin.com

On our last night, we enjoyed the hospitality of THE TAWARAYA OF KYOTO. It’s a 19-room Japanese style Ryokan steps away from the bustling streets of Kyoto in a wonderland of winding passageways, magical sliding doors and private gardens.

For nearly 300 years The Tawaraya had guests sleeping on Futon bedding spread on floor mats attended by smiling maidservants in neat kimonos. It is a place of rare serenity within urban chaos.

Transportation to LA Delta www.delta.com Then Japanese Airlines to Osaka www.japanair.com . There is a 75 minute special JR train from Osaka airport to Kyoto.

Helpful hint: wear shoes that are easily able to slip on and off because you will be doing it many times…entering shrines, temples, restaurants, inns and private homes.

WHERE TO GET INFORMATION:
Japanese national Tourist Association in NY 212-757-5640