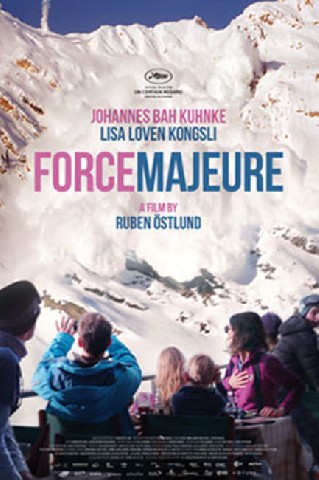 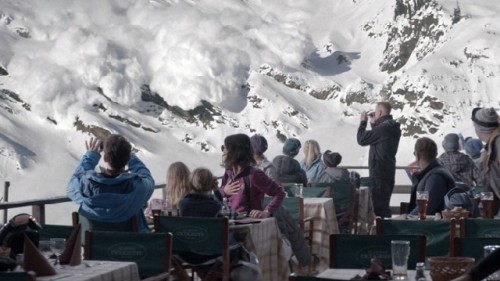 Watching a "controlled" avalanche from the terrace. 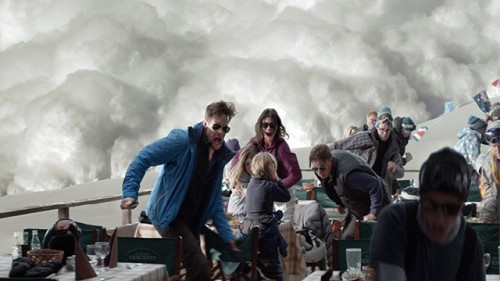 It is soon out of control.

Deeply troubled Emma demands a day to ski by herself.

Tomas and Emma in a better moment. 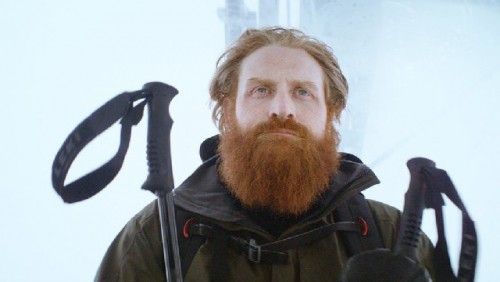 The divorced Mats is vacationing with a twentysomething. 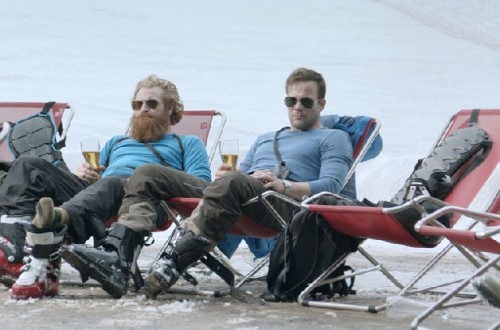 During an apres ski beer they are hit on by attractive young women.

The Swedish film Force Majeure (Turist) written and directed by Ruben Ostlund, his fourth, is likely to run the table of nominations for Best Foreign Film. It was a hit during its premiere at the Cannes Film Festival and has just been given a nod as a candidate for a Golden Globe. It is likely that Ostlund for the second time will represent his country in the yet to be announced Oscar field.

On a recent dark, wet, miserable winter day in New York I sought shelter in a Lower East Side movie theatre that features independent films. It’s across the street from one of my cheap eats pit stops Little Poland.

The film about which I knew nothing was a more or less random selection.

Wow. Was I in for a surprise?

The theatre was relatively full for a late afternoon screening indicating that the word is out. At least among film buffs.

On a lousy winter day ironically the film opened with gorgeous panoramas of the French Alps. In this bucolic setting were long shots of a magnificent lodge and cozy surrounding village set into the side of the best, fluffy, deep powder slopes this side of heaven. Or Aspen.

It evoked the history of such places in the wonderful book American Ski Resort: Architecture, Style, Experience by Margaret Supplee Smith which we reviewed recently.

Films and coffee table books are about as close as most of us will get to such pristine playgrounds for the mega rich. But this absorbing film is about dreams of exotic vacations in the Alps.

In this case, however, imploded into a nightmare that threatens to destroy the seemingly prefect marriage of the Swedish couple Johannes Bah Kuhnke (Tomas), Lisa Loven Kongsli (Ebba), and their adorable but spoiled and privileged children Clara Wettergren (Vera), Vincent Wettergren (Harry).

All is going swimmingly. Well perhaps that’s the wrong word for a winter adventure. Shall we say swooshingly as they zoom down the mountain during exhilarating runs.

I sat there wondering what Smith, an architectural historian, would say about the interior of the resort hotel. There is an atrium and several floors with endless corridors surrounding it. The design evokes both efficiency as well as sterility. Each door leads to a suite with bedrooms as well as efficiency kitchens and dining rooms. It is just enough for a family to make meals and read bedtime stories.

The empty corridors provide a Dantesque metaphor for the circles of Purgatory or the Hell that this couple of going through. Some of the intensive drama between the parents is staged in the empty corridor outside their suite. A maintenance worker is an annoying voyeur of their intimate exchanges. It is an attempt to prevent the kids from knowing about their bickering. But the crying Harry who appears to be just eight or nine blurts out that he is afraid they will get a divorce.

In another scene Tomas who is having a meltdown, or is he, gets locked out for a long interval. He’s been carousing with a mate looking for a bit of male bonding from his woman problems. Ostlund has pushed that metaphor to the max in a just prior incident when Tomas and his friend Mats (Kristofer Hivju) have become involved with a madcap scene of out of control drunken men acting like a bunch of assholes.

In a sense Mats who is handsome in his forties with a great bushy red beard represents what may be the next step for Tomas if indeed his marriage goes South. Now divorced Mats is vacationing with a hot twentysomething Fanni (Fanni Metelius) who is wise for her age and asking probing embarrassing questions about his ex wife and kids.

Because of the tension between them Emma has asked for a day to ski by herself. That entails a break with a woman friend who speaks openly of her extra martial adventures. Exhibit A is a nearby boy toy. Emma, who is a bit uptight, is shocked.

Similarly Tomas gets his turn to ski with Mats. There is a gorgeous scene of them skiing through pristine deep powder. But Tomas really just wants to talk. They enjoy an après ski beer during which nubile and willing ladies hit on them.

Although directed by a male the men in this tense, clever, surprising comedy come off as real jerks. Emma may be a prude but she is something of a gold star Mom. That can get annoying.

In those sweeping shots of the pristine Alps we hear the regular loud boom of attempts to cause “controlled” avalanches. While awesome and fun to play in all that deep snow has the potential to be life threatening. Better to have lots of little avalanches than a really big one.

Or so it seems.

The family is enjoying lunch on a sun drenched terrace. In the distance we hear the loud noise that caused the snow to start moving. Faster and faster. Closer and closer. Not to worry Tomas assures them. Then boom.

There is chaos and a blinding white out.

It appears that the avalanche has overrun the terrace. But in fact it’s just a huge cloud of snow that in a few minutes settles as everyone uneasily and clearly rattled returns to lunch.

During a later dinner party from hell in their suite Emma gives her version of what happened. Tomas uneasily disagrees with her account.

Instinctively she grabbed the kids and huddled over them to take the brunt of the impact. It’s what mothers do.

While Tomas, she coolly and scornfully relates, grabbed his cell phone and gloves and took off. When things calmed down he returned.

His behavior and denial becomes the subject of the dinner party with another couple.

Rather calmly the guests provides analysis and support for both of them. The man sees it as the innate instinct for survival. In the panic of the moment there is no chance to think through the consequences of our instincts.

Ostlund brilliantly and succinctly demonstrates how our lives and relationships can change in an instant.

Not wanting to spoil the enjoyment of this quite wonderful film perhaps we should end the summary at this point. There are many clever twists and turns.

The trauma of near tragedy causes deep introspection. Tomas discovers things about himself that are utterly shattering. While she proves to be cold, dispassionate, and judgmental. She may have the moral high ground but two wrongs don’t make a right.

During the total meltdown that she perpetrates he lashes back that “You’re not the only one who is suffering.”

When the film ended the audience staggered out of the theatre. Couples with friends asked each other about what they had seen. Everyone seemed involved and shaken.

While as a work of art this modest film has flaws it left one thinking about how we would act under similar circumstances? Would we protect our loved ones or run for cover to save our ass? We like to think that we would do the right thing.

Frankly, I don’t know that about myself and hope never to find out.