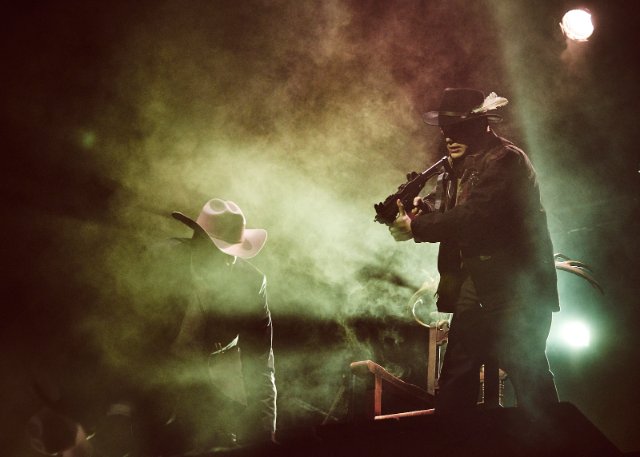 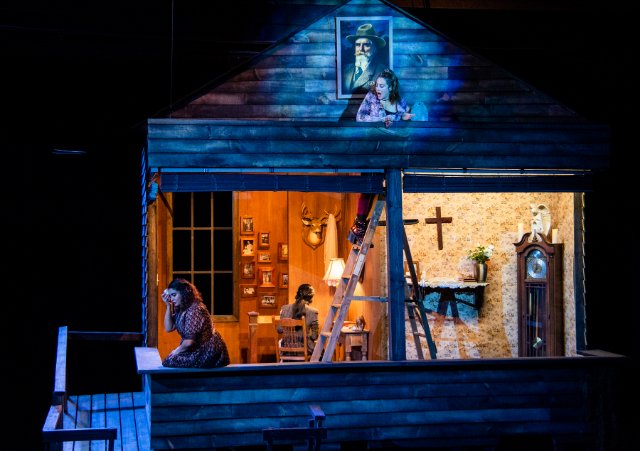 Der Freischutz is everything an 1821 opera should be in a present day performance. The brilliant conception by Louisa Proske, credited with the adaptation and co-direction, surrounds us from the moment we enter the theater.  The circle in the square encompasses the audience.  Next to the home of Agathe at one point in the circle is a looming rock which is part of the Wolf's Canyon.  The orchestra is inside the circle under one section of audience.  In the largest seating area, a platform extends.  The singing actors use all these spaces.  They come very close to us at time, ignoring our presence, but allowing us to see into their souls.  Immersion hardly describes what the production offers.

This is an important opera in large part because it is very good.  The overall opera has character.  Each character in it is also defined and moves the story forward.  The singers were excellent throughout.  The three principals each brought a different dramatic take to their role.  Agathe sung by Summer Hassan is the prima donna of the piece, but she has no power.  Her tender notes show her love for Max.  Yet she is buffeted by her father's wish to be succeeded by a superior marksman.

Max, who is vying for the role, had a bad afternoon before we meet him. Ian Koziara is stunning in the role.  Caught between knowing what he should do and temped by evil, he sings his heart out with a helden edge.  He wavers between the supernatural world and the natural one.  He captures the anxiety and fear this balancing act fosters.

Songspiel, or words spoken and not sung, often are dialogue to music.  Richard Wagner wrote that Weber was singularly ungifted at this form.  Wagner insisted that because humans were born to sing, these spoken words suggested a deficiency.  Here the excellent English dialogue created specially for this production worked well. The audience could understand the proceedings without titles.

In Weber's time, his Wolf's Glen music, when the hero Max descends in the underworld, was often criticized as being unmusical.  The Heartbeat troop has taken Weber's notion that this is not of the world and not of the musical world, and rocketed it into supernatural space.  Often electronically enhanced, eerie and threatening sounds fill the theater space along with billowing smoke.  It was better than any sci fi films' music score.

The chorus of hunters, Samiel the devil, delightful Annchen (Jana McIntyre) round out the cast.  It was an exciting and provocative evening.  The message for our time whirled out of Jersey City earlier in the day.  Magic bullets are the devil's.

The orchestra, and the accordion and piano playing conductor added to the evening's musical pleasure. Heartbeat produces irresistible opera.