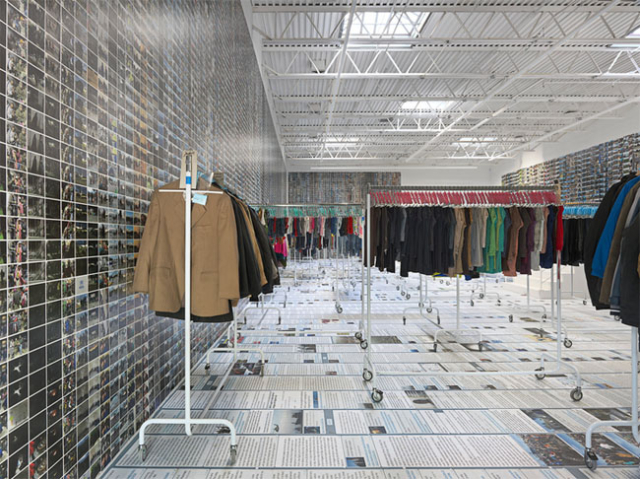 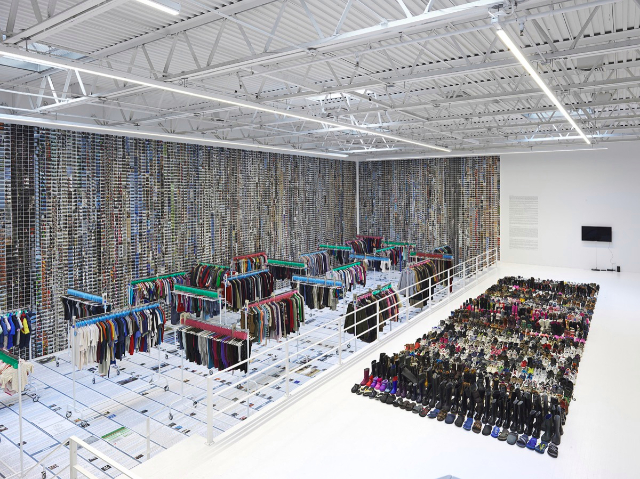 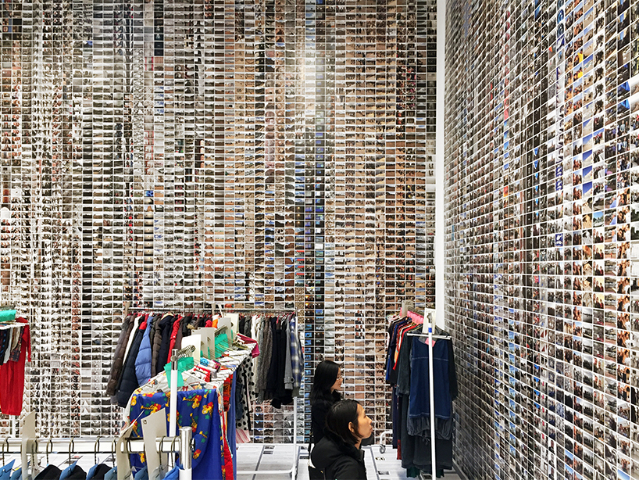 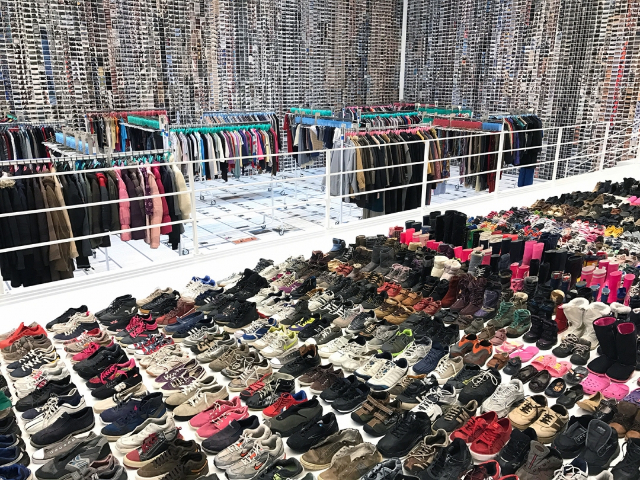 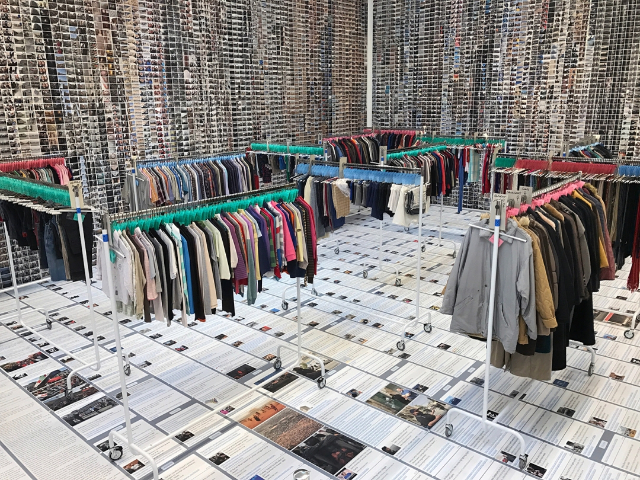 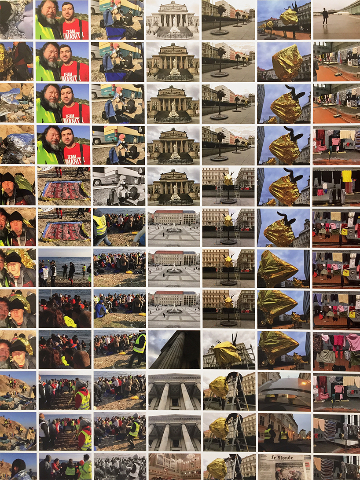 What is posted below is a press release from Jeffrey Deitch gallery which includes an interview with the artist about his recent work and the concepts behind the installation of Laundromat.

Many artists engage with current political issues in their work, but it is the rare artist whose message transcends the art discourse and influences a wide international audience. Ai Weiwei has built on the moral authority of his work to focus attention on some of the world’s most urgent problems. Through his work, he has become one of the most important advocates of human rights. Laundromat is an extraordinary exhibition project that addresses the current refugee crisis. The exhibition focuses on the refugee camp at Idomeni on the border of Greece and FYROM, the former Yugoslav Republic of Macedonia. Ai Weiwei explains the back- ground and the concept of the exhibition in the following Q &

A: How did the refugee project begin?

The refugee project began while I was living under soft detention in Beijing. Following my arrest and secret detention in 2011, my passport was confiscated and I was prohibited from traveling outside of China. Although I could not leave the country, I was able to stay engaged globally through the Internet. I have participated in hundreds of exhibitions in absentia.

For the 56th Venice Biennale, the Ruya Foundation asked me to make a selection of drawings for a publication entitled Traces of Survival. The drawings were made by refugees living in the Shariya refugee camp in Iraq. This gave me an opportunity to get further involved and I asked to make a visit to the camp. I designed a survey and, be- cause I could not leave China, had two assistants travel to the camp. The survey asked of the refugees several basic and essential questions: Who are they? What kind of life did they have before? How did they become refugees? What did they think of their future? In total, my assistants conducted over a hundred interviews at the Shariya camp.

In July 2015, I received my passport back from the Chinese authorities and traveled to Berlin. There, I visited some refugees who had recently arrived from Syria. I decided to become more involved. I was unfamiliar with the situation and the scope of the issue was wide enough for me to study. During Christmas, I visited the Moria refugee camp in Lesbos, with my son and partner. I saw how the refugees arrived on the Greek shore, many of them women and children. The conditions at the camp were shocking.

I thought back on my own experience as a refugee. When I was born, my father, Ai Qing, was denounced as a ‘rightist’ and was criticized as an enemy of the party and the people. We were sent to a labour camp in a remote region far away from our home. We carried almost nothing with us to the camp, only trying to survive. It was an extremely difficult time being seen as a foreigner in your own nation, an enemy of your own people, an enemy of those my father loved most. I know what it is like to be viewed as a pariah, as sub-human, as a threat and danger to society.

How did you first get involved in Idomeni?

The refugees leave their homes because of the war. They are trying to escape immediate danger. They have lost their relatives. I met a young boy, only 18 or 19 years old, and he was shaking. I put my arm around him. He told me that, underneath his blanket, he had lost his right arm. I also began to shake. He’s so young and you can only imagine what he has been through, what his future will be like. That fear, even after having arrived in Europe, can still be seen in their eyes. I can imagine that fear has not dissipated, but their new reality has given them even more to worry about.

I cannot give them food or tea, or money, but rather I can let their voices be heard and recognized.
I can give them a platform to be acknowledged, to testify that they are human beings. During the saddest moments in our history, mankind has had to prove their worth as humans to their own kind. Unfortunately, this has proven to be the most difficult task. As an artist, this is something I would like to take on. I decided to follow the refugees’ path. I went to the Idomeni refugee camp. It had become a bottleneck when the flow of refugees entering Europe was completely shut off. Be- fore, the refugees would travel through Idomeni on the so-called Balkan Route to reach Europe. Once the Macedonian government closed the border, the camp swelled to over 15,000 refugees.

They stayed in the field next to the railroad tracks, living in temporary tents provided by the NGOs. They stayed there with no government assistance. The NGOs provide support for the flow of refugees, but many things are beyond their power. They cannot handle things such as registering the refugees and they have no authority to enact order. They cannot establish basic sewage or clean water systems. During my visit, it rained constantly. The Idomeni fields turned to mud. The refugees, many of them women and children, lived through these extremely difficult conditions, waiting to be handed a cold sandwich and news of what would come next. With great frustration, we couldn’t do much. I start- ed to take many photographs, to try to record the moment. The harsh reality can act as evidence and make us reflect on these conditions. This is a condition many people refuse to see, or try to distort or ignore. Many willfully believe this isn’t actually taking place. When you see so many children out of school, 263 million children worldwide, you can easily predict what our future holds.

By this point, we had already decided to make a documentary. We had several teams covering different people’s stories: a young pianist from Syria, a lady who brought her cat with her on the long journey, a family of thirty from Afghanistan, an economics student who hoped to finish his PhD in Europe but who is, today, still stuck in a Greek refugee camp. We have filmed in Greece, Turkey, Lebanon, Jordan, Israel, Gaza, and Kenya. We will film in Afghanistan, Iraq, Pakistan, Bangladesh, and Mexico. I have personally visited over twenty camps in different locations and interviewed over a hundred people including politicians, NGOs, volunteers, smugglers, gravediggers and countless refugees.

How did the concept of Laundromat come together?

When we started filming in Idomeni, the first thing we noticed was people trying to change their clothes. These are the clothes they wore from Syria, wet and soiled from the difficult journey across the ocean, over mountains and through woods. They had no chance to wash their clothes until they were forced to stop in Idomeni. They would hand wash the clothes and throw it on the border fence to dry. There was nowhere else to hang dry their laundry. We photographed the clothes, but we did not, and could not, imagine they could later be included in an exhibition. The clothes were some of the few posses- sions they could take when they decided to leave their homes. There is not much else they could take. Off the coast of Lesbos, I found an abandoned boat drifting in the sea. Inside, I found a copy of the Bible and a baby’s bottle. You would also find small objects wash up on the shore. These objects were the most precious things a person could have, the last things they brought with them as they sought a new life.

Once the refugees were forced to evacuate to different camps from Idomeni, many of those possessions were left behind. Trucks came in and loaded these items up to take towards the landfill. I decided to see if we could buy or collect them so they would not be destroyed.

Previously, my studio collected many life jackets from the local officials in Lesbos and made an installation with them at the Berlin Konzerthaus. My team negotiated with local officials who agreed to let us have the collected material. They were aware of our presence and were supportive. With a truckload of those materials, including thousands of blankets, clothes and shoes, all impossibly dirty, we transported them to my studio in Berlin. There, we carefully washed the clothes and shoes, piece by piece. Each article of clothing was washed, dried, ironed, and then recorded. Our work was the same as that of a laundromat.

The work that will be shown at Jeffrey Deitch, let’s talk about some of the parts. You will be showing the clothes on the clothing racks in the main space. Is that the evidence of the work, evidence of what happened in Idomeni?

My work is a total work. What I do everyday, shooting documentary footage, doing research, archiving materials, that is all part of the same effort.

It could be called an individual work, but it’s really part of a total effort. One of the aspects included in the exhibition is the Allen Ginsberg poem…

Allen is an old friend of mine. He has always had a strong compassion for those in need of help. With the help of the Allen Ginsberg Project and Larry Warsh, we received Allen’s early poems and readings. I think this is the best location for New York City to experience its own poet, the son of an immigrant, reading September on Jessore Road. His voice reflected the Bangladesh refugee crisis, which he saw when he visited the West Bengal refugee camps in the 70s. It’s a very touching poem evoked by a gentle, human voice. The story it tells is the same one unfolding today, the same story from a thousand years ago and, unfortunately, one that might continue into the future.