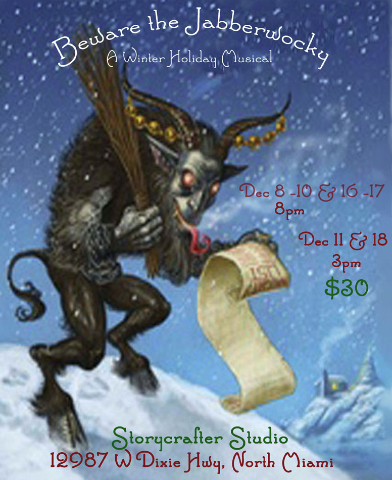 Tis the season for gifts, goodwill, holiday cheer and feasts.

Holiday theatrical fare usually includes ample portions of Ebenezer Scrooge (bah! Humbug!)…and that boy who can’t seem to convince the adults in his life that he’s a good enough shot.

“A Christmas Carol” and “A Christmas Story” are certainly high-quality shows, but new holiday theatrical traditions are always welcome.

Award-winning writer Cynthia Joyce Clay has given us one with “Beware the Jabberwocky,” set during the “Winter Solstice” of an unspecified time period.

We can assume it’s the Middle Ages, since Clay’s tale contains medieval carols.

“Beware the Jabberwocky” is on stage at North Miami’s Storycrafter Studio, an intimate nonprofit theater company and arts institution, through Dec. 18 in a production that could use some polishing.

Hopefully that needed sharpening will take place. The material itself contains some eloquent, poetic language and season-appropriate themes such as generosity.

The tale involves a curse, an orphaned young woman, a lady whose husband’s gone missing, her granddaughter who’s been turned into a lamb and a mysterious being called the “Jabberwocky.”

Poet Lewis Carroll, who penned “Alice’s Adventures in Wonderland” and other Alice-related stories, included the creature in Alice’s second adventure: “Through the Looking Glass and What Alice Found There.”

Clay’s musical is enchanting with mood-stirring songs, but there are holes.

“Yes, my granddaughter turned into a lamb the very day my husband vanished,” his wife, named Elise, notes.

But why did the little girl turn into an animal and why did grandpa disappear?

An explanation wouldn’t hurt, especially since, in its current form, the musical lasts only about an hour. Lengthening it somewhat to include a back story probably wouldn’t lengthen the show too much.

On a positive note, the ending is tied in nicely with the beginning, although to say more would be to give away too much.

A live theater production, unlike a movie or television show, is never “fixed;” one performance can take on an entirely different flavor and quality than the other.

With that said, judging from Friday night’s performance, the production needs work. Timing was off between the cast when they were singing and the recorded music. It appeared some lyrics were forgotten (there were periods of silence, when only the recorded music) and orphan Jolie sang the last song in the dark; there was no spotlight on her, so we couldn’t see her facial expressions.

But there’s warm, soft lighting during scenes of contentment that suggests a cozy atmosphere.

As Jolie, Rachel Chin is a joy to watch. She vividly and convincingly conveys emotions, whether Jolie is spent, starving and shivering, dramatic, fearful or joyful. Chin has telling facial expressions, which she puts on display in her nuanced performance.

Clay, who wrote the book and lyrics, directed the production and designed the visually appealing, character-appropriate costumes, lends an air of grace and optimism to Elise. That could suggest that although her husband’s gone missing, the character’s confident he will return. Still, Clay could add a touch of sadness or worry to her performance. Which wife, no matter how strong, wouldn’t experience at least a hint of those emotions after hubby mysteriously disappears.

Guillermo Ramon has a sneaky air as Jabberwocky, while Miami Country Day third-grader Tatum Skye imbues the child-turned-lamb with an infectious optimism.

The actors perform on a set that contains little more than some chairs and stools. The most striking item on the bare-bones set is a red and white piece of furniture whose purpose in the production is questionable. Still, it captures the holiday spirit, as does the song “Deck the Halls,” one of the only other nods to Christmas.

Clay mentions the “Winter Solstice” and there are other references to winter-time. That’s because none of the holidays celebrated during this most wonderful time of the year are directly mentioned in this non-sectarian musical.

As the production’s director, Clay helps the cast capture the moods of songs and scenes and the production is paced well. The singing could use work, though. The songs range in mood from joyful to sad, and were arranged by experienced composer Pamela Marshall.

The songs aren’t memorable, but they’ll introduce you to medieval-style music. If you’re new to Clay’s writing, take a listen for the first time; it contains a musical quality of its own.