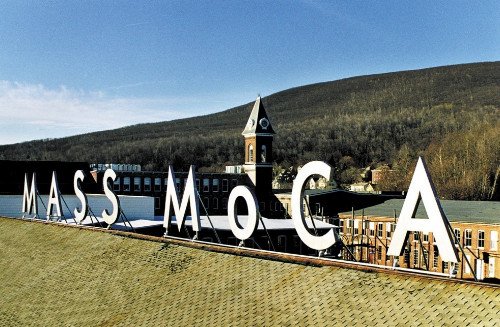 In the Galleries
Anthropologist-turned-artist Richard Nonas fills MASS MoCA’s signature Building 5 Gallery with an ambitious exhibition of quietly powerful, floor-bound sculpture on February 13. For five decades, Nonas has created work whose terse, reduced vocabulary belies its capacity to fundamentally alter our sense of landscape and architecture, and at MASS MoCA, he presents both a survey of existing sculpture and a major new site-specific installation. Neo-pop rising star Alex Da Corte explores themes of love, family, death, and sex when he transforms the museum’s second floor gallery with carpet, tile, brightly painted walls, neon lighting, and a colorful mashup of consumer objects, electrifying videos, and new sculpture on April 16. Sarah Crowner makes her solo museum debut on April 16 in an exhibition of her colorful, patterned works — including sewn paintings, benches, and a monumental tile mural — that mine the legacy of abstraction in both the fine and applied arts. The show’s centerpiece functions as a stage, offering visitors a chance to share the spotlight. On April 16, group exhibition The Space Between examines overlooked transitional spaces on, around, and outside the museum campus, staging art in these “in-between” areas to explore memory, history, and transformation.

On April 12, artist Nick Cave shares his ideas for Until, his most ambitious exhibition to date, in a not-to-be-missed dialogue with curator Denise Markonish. Until will transform MASS MoCA’s largest gallery into a dazzling, socially-relevant, immersive environment, opening October 2016.

Concerts
MASS MoCA kicks off its summer concert series on June 11 when alt-rock quintet The National takes Joe’s Field. The National, lauded critically and commercially for its “perfect track record” (The Independent) of acclaimed albums and live performances, brings over 15 years of beloved hits to MASS MoCA’s largest venue. The outdoor performance (which takes place on the heels of the spring 2016 release of the band’s much-anticipated Grateful Dead tribute album) is the group’s only 2016 headline concert in the Northeast.

World music icon Angelique Kidjo brings her beautiful lyrical phrasing and passion for social justice to the Hunter Center on February 13. NPR Music raves, “The power of Kidjo’s unflappable voice, the range of her emotional expression, the stellar, genre-bending musicians who back her and the infectious, activist energy that courses through her songs all transcend any native tongue.”

On March 5, Ken Winokur of Alloy Orchestra provides a live soundtrack to Ken Brown’s Psychedelic Cinema, an epic mashup of Super 8 films from the 60s, which audiences will recognize from Jimi Hendrix and Sly Stone’s video shows.

Up in the Club
MASS MoCA’s more intimate shows in its Club B10 begin on January 23 with Birds of Chicago, a groovy, soulful Americana collective that left crowds breathless at the 2015 FreshGrass Festival. On February 20, sublime vocalist Jason Walker promises an affecting performance of passionate, gospel-infused soul. Rising star and Grammy nominee Ruby Amanfu gets hearts racing with transcendent soul-rock on April 2. Relive Ethiopia’s golden era of afro-pop when the iconic Debo Band gets audiences grooving on April 16. Fierce drummer Allison Miller and her smokin’ band bring propulsive rhythm and melody in Boom Tic Boom! on May 7. On January 30, audiences will recognize stand-up comedian Chris Gethard from turns on Louie, Broad City, The Office, and Parks and Recreation, as well as his own notoriously wild comedy show.

Festival
MASS MoCA knows comedy, and this season is no exception. Following Chris Gethard’s January appearance, the inaugural High Mud Comedy Festival takes place on March 11 and 12 in a jam-packed weekend of stand-up and funny film featuring the best and brightest in the industry, as well as a bevy of regional rising stars. This might be the start of something big.

Works-in-Progress: Something for Everyone
“See it here first” when MASS MoCA hosts an impressive lineup of works-in-progress this spring. All season long, a top-notch assembly of premiere musicians, filmmakers, dancers, and artists of all kinds convene and collaborate at the museum to develop never-before-seen masterpieces that debut to MASS MoCA’s audiences in workshop performances.

On February 27, the stars align when theater-maker Rinde Eckert, Oceanic Verses composer Paola Prestini, director Julian Crouch, instrument-maker Mark Stewart, the Brooklyn Youth Chorus, and producer Beth Morrison collaborate on the extraordinary production The Aging Magician, which tells the peculiar and delightful story of an aging man’s journey through Coney Island. Hold on to your hat on April 9 when the outrageous theater artist Taylor Mac presents the latest installment of his wildly popular performance series, A 24-Decade History of Popular Music, in a 6-hour performance covering music from 1836 through 1896. On January 16, audiences embark on a multi-sensory journey during Daniel Wohl: Holographic, in which composer Wohl’s dreamlike music is synched in real time with lush visuals, conjuring hidden sonic landscapes. On March 26, cellist Jeffrey Zeigler, composer and percussionist Andy Akiho, and poet Roger Bonair-Agard present M is Black Enough, a thought-provoking program of spoken word and music. On May 19 and 20, audience members get earbuds to use with their cell phones, and follow instructions to uncover a choreographed journey through MASS MoCA in Projet Situ: The Round.

Dance
Dance gets plenty of attention this season when MASS MoCA and Jacob’s Pillow Dance present two cutting-edge work-in-progress events. On February 10, 12, and 13, see the galleries in a new light when Big Dance Theater serves up an interactive, performance-based museum audio tour created by Annie-B Parson and Paul Lazar that changes how we experience a museum. On April 23, beloved NYC choreographer Zvi Gotheiner reworks Kerouac’s classic in ZviDance: On the Road, a multimedia piece that grapples with the enduring importance of 1960s social rebellion.

Documentary Film Series
Young love; forbidden love; love of dog; love of country: explore the many sides of the human heart in the four films that comprise our documentary series, Love is Complicated. In Laurie Anderson’s Heart of a Dog (January 21), Above and Beyond (February 11), Love and Marriage in Kabul (March 10), and How to Dance in Ohio (April 21), love is complicated, no matter how you look at it.

For Families
Go behind the scenes during MASS MoCA’s annual Free Day on January 30, when the museum opens its doors to welcome all visitors, free of charge. Enjoy live elevator music, pop-up performances, and gallery tours, and step up to Kidspace’s ArtBar for some off-the-walls art-making fun. On February 15, photographer Dana Hoey, whose work, which lets viewers step into the action of a kickboxing ring, is now on view in Artists’ Choice: An Expanded Field of Photography, teams up with professional fighters Joe Falanga and Alex Stagi to present a kickboxing and cell phone photography workshop for ages 11 and up. On April 29, celebrate creativity at the 6th annual Teen Invitational, which features the work of students and teachers from seven North Berkshire high schools.

MASS MoCA continues its successful “Free on the 4s” program through the spring, throwing open the museum doors free of charge to its neighbors in North Adams on the fourth of the month through May 2016. 01247 residents can present an official ID or utility bill with a current address to get free gallery admission on the 4th of January, February, March, April, and May.

Buy Now, Save Money
MASS MoCA discounts tickets 25 percent for spring 2016 performances when purchased by January 4. Discounts do not include festivals, camps, tickets to The National, or $5 member tickets. Discounts do not combine.

Tickets for all events are available through the MASS MoCA box office located on Marshall Street in North Adams, open 11am to 5pm every day except Tuesdays through spring 2016. Tickets can also be charged by phone by calling 413.662.2111 x1 during box office hours or purchased online at massmoca.org. All events are held rain or shine.

The National
Onsale and Presale ticket info to be announced shortly. Check massmoca.org for updates.