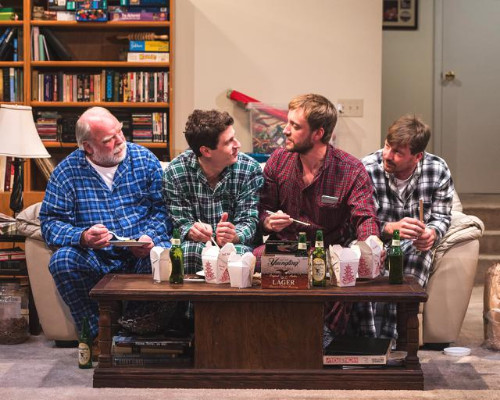 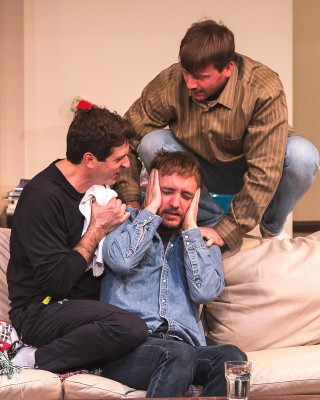 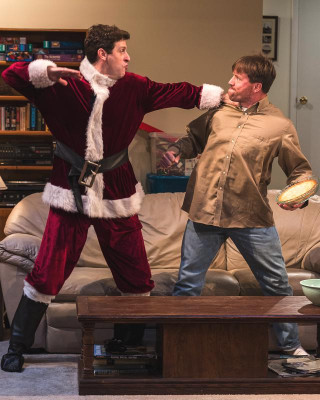 Plays can have hidden agendas, veiled or guarded plot points, and various twists on the endings. Usually, it’s a device to keep the narrative text from tipping off the audience before the playwright has made his or her case as to how the play will end.

Tradition has followed the linear format – beginning, middle, and end – for a couple of hundred years. Audiences long ago embraced this format. It’s familiar, comfortable and satisfying.

However, when a play comes along by a playwright with a purposeful agenda to test and challenge audience perceptions, almost daring them figure out what is taking place on-stage well then, you must be watching a play by Korean-born but American raised and educated New York City-based Young Jean Lee, a veteran playwright with an east coast following. This is her first linear written play, and it’s one with lots to think about when it comes to a family of four straight white men living in the Midwest.

As Ms. Lee explained to a group of theatre-goers prior to the performance, she wanted to shake up and force the audience out of its comfort zone with this play. During the previews of “Straight White Men”, a comedy with deceptive dramatic undertones, audience feedback revealed that audiences had a difficult time understanding what the play was about even though they had just witnessed it.

Most playwrights and directors would be worried as to the longevity of a production after hearing such comments.   For Ms. Lee who is both the playwright and the director it was music to her ears. Part of her plan for the play is to deconstruct whiteness in America and have the privileged ‘white class’ perform a mental self-awareness test.   Changes are coming in 21st century American society as rainbow coalitions and multi-racial and multi-culturalism become the norm rather than the exception.

Ms. Lee’s story is set in the Midwest at Christmas and revolves around retired, loving, and non-judgmental father Ed (Richard Riehle) and his three 30-something adult sons. Matt (Brian Slaten) is an introspective, PhD dropout who has been forced to move back and live with his father. Jake (Gary Wilmes) is the middle son and a successful banker, now divorced. Drew (Frank Boyd) is the youngest son and an earnest writer/academic professor who has gone through therapy and is now a champion of its precepts. There is nothing more zealous than a convert to anything, and Drew is determined to help Matt overcome whatever it is that’s troubling him regardless of whether he wants the help or not. He doesn’t.

The boys always gather at Christmas time to be with their widowed father where all get to ham it up, tease one another and play the games of their youth as a way of diverting the boredom of the three day holiday. Matt is having the hardest time coming to grips in understanding his depression and who he is and how he fits in with society. How the four family members respond to these events is the guts of the story.

Plays may be ‘the thing’, however, it’s the players that bring order and clarity to the psychodrama unfolding on stage.   As an ensemble piece, we are treated to four finely judged and nuanced performances by four talented actors, making it an exhilarating display of individual brilliance within a team format.

In the third act, the story takes a more somber and highly emotional turn when Slaten as Matt and Riehle as Ed, have a powerful and poignant scene between father and son that is so simple and yet so heart-wrenching, one feels this must be the cathartic moment the audience has been waiting for. But wait… (no spoiler alert here) there’s more great stuff to come.

Even after seeing the play performed, it’s still too early to tell whether Ms. Lee will succeed in getting her coded message about the ‘real story’ of “Straight White Men” being accepted by mainstream audiences. Only time will tell.

The intriguing play is performed without an intermission.

“Straight White Men” performs at the Kirk Douglas Theatre in Culver City, and runs through December 20, 2015.