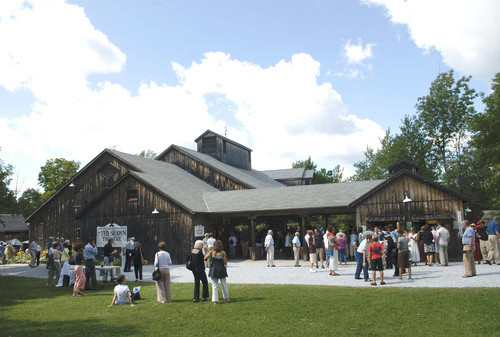 Following the critical acclaim and record-breaking ticket sales and attendance of Festival 2015, Jacob’s Pillow Dance Festival announces a new season of exciting programming featuring international artists, world premieres, and an impressive number of live music engagements. This season signals an exciting new era in Pillow history, as the Board of Directors plans to name a new Jacob’s Pillow Director in early 2016. Former Executive and Artistic Director Ella Baff stepped down from her role in September of 2015, following a successful 17-year tenure.

“It may be winter but the Pillow is buzzing with excitement,” states Managing Director Andrea Sholler. “We are looking forward to the selection of our new Director, a thrilling 2016 season, and enhancements to our Festival offerings including changes to the Jacob’s Pillow Store and new partnerships with Berkshire County restaurateurs. Festival 2016 features artists from all over the globe, live music for 10 of the 20 Ted Shawn and Doris Duke Theatre artists, and world premieres by renowned choreographers in a multitude of genres – we can’t wait to welcome audiences back to the Pillow.”

The artist faculty members of The School at Jacob’s Pillow are as equally international and diversely experienced as the Festival artists. The 2016 Program Directors include ballet luminary Anna-Marie Holmes; Ailey School and Juilliard faculty member Milton Myers, who celebrates his 30th year of mentoring and coaching at The School at Jacob’s Pillow; Broadway veteran, choreographer, and director Chet Walker; and the esteemed founder of Urban Bush Women Jawole Willa Jo Zollar.

Prior to the Festival, Jacob’s Pillow and MASS MoCA will co-present Festival 2016 artist ZviDance at MASS MoCA’s Hunter Center, Saturday, April 23 at 8pm. The program will feature a work-in-progress showing with segments of On the Road, a multimedia work that contemplates the social upheaval of the 1960s and 1970s. Tickets available at massmoca.org.

Member Only Event June 11 and June 16 in Pittsfield, MA

Performed in the confines of a 17 foot box truck, Bridgman | Packer Dance’s visceral, site-specific work is an unconventional performance where dance, video projection, image, and reality collide. In this non-traditional, accessible performance aimed to bring dance to audiences of all backgrounds, Guggenheim Fellows in Choreography Art Bridgman and Myrna Packer create an evocative and humorous world which explores how context changes perception. TRUCK will be performed at a Members-Only event at Jacob’s Pillow on June 11, as part the City of Pittsfield’s Third Thursday community event on June 16, and at the Jacob’s Pillow Season Opening Gala on June 18.

The exclusive Season Opening Gala event will include a special performance of Bridgman | Packer’s TRUCK, Festival 2016 artist Aspen Santa Fe Ballet, the dancers of The School at Jacob’s Pillow’s Ballet Program in a world premiere created by former Boston Ballet principal dancer Yury Yanowsky, and other artists. This signature fundraising event also includes the presentation of the 2016 Jacob’s Pillow Dance Award, the opening of a new Lois Greenfield exhibit, and both live and silent auctions, followed by dinner and dancing to live music by Bev Rohlehr and The Colbys and DJ BFG.

Led by dancer and Artistic Director Juan Siddi, the 14 dancers and musicians of Juan Siddi Flamenco Santa Fe present a program of flamenco dance and powerful live music. Founded in Santa Fe in 2008 and in artistic partnership with Aspen Santa Fe Ballet since 2014, the company’s “physical bravado” and “fabulous footwork” (Emmaly Weiderholt, Santa Fe Reporter), captures the form’s rich cultural heritage and infuses it with a unique, contemporary flair. Virtuosic musicians and vocalists, many hailing from Spain, heighten the dramatic power of this electrifying ensemble.

Founded in 2007 under the direction of renowned France-based ballet dancer and choreographer Gilles Brina, the Argentinian Che Malambo presents the traditional dance of South American cowboys (“gauchos”) in an evening of “rapid-fire rhythms” and “spinning boleadors” in a “rousing group spectacle” (Siobhan Burke, The New York Times). The company of 14 male dancers integrates live drumming and swift, intricate footwork in an evening-length display of the 17th century-styled competitive duel of Malambo, a test of strength, agility, and speed.

In a rare U.S. appearance, Seoul-based Bereishit Dance Company makes its Jacob’s Pillow debut in a highly-physical program blending innovative partnering, extraordinary isolations, and moments of theatricality with a fresh perspective. Founded in 2000 by choreographer Soon-ho Park, the company presents the rigorous male duet BOW inspired by the sport of archery and the boundary between dance and athletics. The program also includes the “impressive and unforgettable” (Gesa Polert, Germany’s Rheinische Post) Balance and Imbalance, featuring clever interplay between the cast of five dancers and a pair of onstage traditional Korean drummers accompanied by a pansori singer.

And Still You Must Swing

Three of the world's most celebrated tap luminaries come together in an evening of live music and tap dance in the world premiere And Still You Must Swing. Each returning to the Pillow after various standout performances, Dormeshia Sumbry-Edwards joins forces with Derick K. Grant and Jason Samuels Smith to present a dynamic project that captures the heart and legacy of tap dance, honoring the profound influence of jazz and beyond. The program embraces masterful technique, musicality, and improvisation, with a stellar cast and critically-acclaimed guest artists including Camille A. Brown.

Under the artistic vision of Israeli-born Zvi Gotheiner, ZviDance is widely-extolled for its hallmark of innovative works and lush movement. The company performs the dance triptych Escher/Bacon/Rothko in three distinct sections inspired by the artwork of twentieth-century masters M.C. Escher, Francis Bacon, and Mark Rothko. An evening-length work for 10 dancers, Gotheiner’s sweeping and intelligent choreography illuminates layers of connection in each artists’ notion of modernity, danced to a compelling original score by composer Scott Killian.

Praised as “an expressive young powerhouse dancer” (Jennifer Dunning, The New York Times), former Nederlands Dans Theater (NDT) and current Kidd Pivot company member Bryan Arias now leads his own ensemble, ARIAS Company. Created during two Jacob’s Pillow Creative Development Residencies, the program features the world premiere of a rather lovely thing, a contemporary work that challenges notions of identity, bias, and stereotype, set to a score with music by Frédéric Chopin, Nico Muhly, and Max Richter, among others. A work for six talented dancers (including Arias himself), the esteemed roster includes Jermaine Spivey of The Forsythe Company and Kidd Pivot; Spenser Theberge of The Forsythe Company and NDT; Banning Bauldin of

France-based Compagnie Hervé KOUBI makes a rare U.S. appearance in the Ted Shawn Theatre in the highly physical and awe-inspiring evening-length work What the Day Owes to the Night. Led by the artistic vision of French-Algerian choreographer and Aix Marseille faculty member Hervé Koubi, the all-male company is comprised of 12 dancers from Algeria and Burkina Faso who combine capoeira, martial arts, hip-hop, and contemporary dance with “mesmerizingly fluid strength” (Brian Seibert, The New York Times) and perform as if “there [is] no such thing as physics” (Rebecca Ritzel, The Washington Post).

Following sold-out engagements in the past three seasons, MacArthur Fellow, New York Dance and Performance “Bessie” Award recipient, 2013 Jacob’s Pillow Dance Award recipient, and 2014 Tap Program Director of The School at Jacob’s Pillow Michelle Dorrance, in partnership with Nicholas Van Young and Dorrance Dance, returns to the Ted Shawn Theatre. The company will present the new evening-length work ETM: Double Down, an expansion of ETM: The Initial Approach which premiered at Jacob’s Pillow in 2014 and was created during Creative Development Residencies at the Pillow. ETM utilizes Young’s original electronic musical devices to create a live sound score and push “the boundaries of tap while exposing its true nature: that it is music” (Gia Kourlas, The New York Times).

A revival of iconic works by the legends of modern dance, Adam H. Weinert’s MONUMENT infuses a contemporary perspective on ever-relevant themes of identity. With ingenuity, reverence, and grace, Weinert and an ensemble of esteemed dancers perform classic solos by Doris Humphrey, José Limón, and Jacob’s Pillow founder Ted Shawn, as well as original choreography by Weinert himself, transporting audiences to a world that is “fleeting, mysterious and wholly alive” (Gia Kourlas, The New York Times). An alumnus of The School at Jacob’s Pillow and a former Jacob’s Pillow research fellow, Weinert uses his unique perspective and choreographic skill to illuminate Ted Shawn’s legacy.

been seen widely in both the concert and commercial dance spheres; “This dance form, these artists, won’t be boxed in” (Siobhan Burke, The New York Times).

Hailed as “the wittiest choreographer since Mark Morris” (Alastair Macaulay, The New York Times), Pam Tanowitz has been creating dances since 1992 and is a New York Dance and Performance (“Bessie”) Award and 2011 Guggenheim Fellowship recipient. Tanowitz brings her signature eccentricity, sharp energy, and unpredictable rhythms in a program including the striking Heaven on One’s Head (dubbed one of the Best Performances of 2014 by The New York Times) and the story progresses as if in a dream of glittering surfaces, a love letter to romantic ballets in an ultra-post-modern framework. Acclaimed New York City-based string quartet FLUX Quartet performs live for both works, alongside a commissioned electronic score by Dan Siegler.

and contemporary movement technique. The work is a deeply personal dance, full of gesture and bursts of energy, strongly grounded in African traditions and history.

Beyond its summer festival, Jacob’s Pillow is an active year-round organization. Through Jacob’s Pillow Curriculum in Motion®, a nationally-recognized program, Artist Educators work with Berkshire County teachers and students grades K-12 to transform curricula such as biology, literature, and history into kinesthetic and creative learning experiences. 2015-2016 Curriculum in Motion® residencies will take place at Conte Community School, Becket Washington Elementary, and Monument Mountain Regional High School. Creative Development Residencies take place at the Pillow throughout the year. Dance artists are invited to live and work at Jacob’s Pillow for one to three-week residencies and during that time they are given a stipend, housing, and unlimited access to rehearsal space, the Archives, and staff support. In the fall months of 2015, Sara Mearns, Jodi Melnick, John Heginbotham, Maira Kalman, and John Jasperse participated in Creative Development Residencies at the Pillow. In April of 2016, choreographer Michelle Dorrance and her company will enjoy a week-long Creative Development Residency to develop ETM: Double Down.

Jacob’s Pillow Dance Interactive (JPDI) is the Pillow’s online platform for videos and digital dance resources and remains active every day of the year. JPDI (http://danceinteractive.jacobspillow.org/) includes a wide range of Festival artists and video content from the 1930s to 2015 with new content added each month. Following a full website redesign in May of 2015, JPDI has experienced a 168% increase in daily visitation with new users at 81.3% and a global reach of 27% of users based outside of U.S. The Jacob’s Pillow Intern Program is also active year-round, offering hands-on work experience to college students and recent grads seeking a deeper education within arts administration and production. At the same time, The School at Jacob’s Pillow is hosting international auditions and workshops and planning its national audition tour, which will kick off in January in Miami. The School at Jacob’s Pillow is a leading center for professional advancement; each year thousands of dancers audition and apply and only 100 are selected to participate in one of four programs in Ballet, Contemporary, Cultural Traditions, and Musical Theatre Dance. The international students of The School are immersed in Festival life as they take class, attend seminars, and learn classic and new dance work from today’s greatest choreographers, mentors, directors, musicians, and Broadway performers.