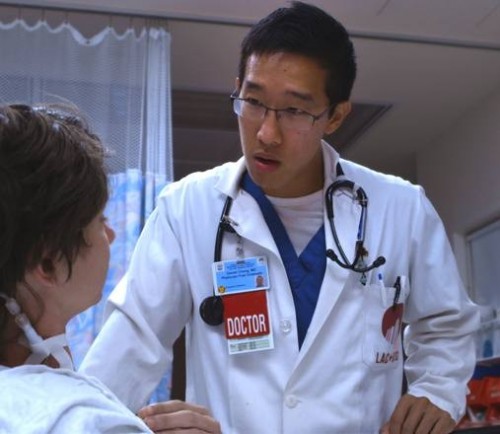 Dr. Danny Cheng in the ER. 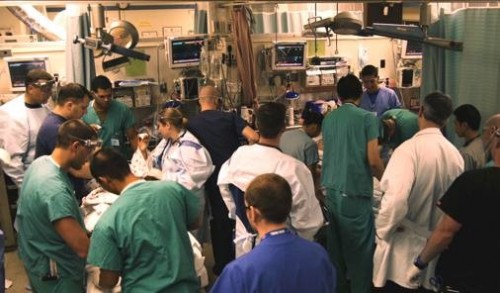 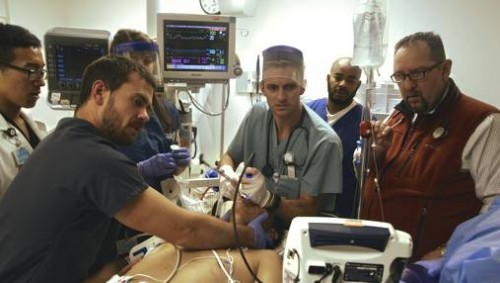 The staff of an ER endures constant pressure from an overflow of patients.

Unless you are a health professional, one only gets to view the Emergency Room (ER) either by walking into one as a patient or, on a gurney while being transferred from an ambulance. Either way, the documentary film written and directed by first time filmmaker Dr. Ryan McGarry, MD, is a fascinating and eye-popping journey into work-shifts of ER doctors, and nurses of Los Angeles County Hospital.

This is not a TV series episode or “ER”, although it looks like one. The “characters” in this documentary are the real McCoy. No “actor portrayals” here; just real life and death situations and the aftermath. It’s a visual chronicle of life in the ER from the doctors and nurses POV’s. Sometimes it’s heart-breaking or achingly poignant and uplifting. This engaging documentary film, however, is always a compelling screen journey of dedicated medical professionals doing what they love and what they do best: putting into practice the Hippocratic oaths they signed years ago in medical school.

Although the film takes place in the present, it has its beginnings in Los Angeles during the 1970s. There wasn’t any Emergency Room special unit back then. A group of doctors at LA County Hospital, sort of got together and began treating patients who would wander into the hospital seeking treatment for severe injuries, either in accidents at home or on the road. This entailed gunshot wounds; survivors of fires, unknown symptoms of distress, in short, all manner of medical issues. One thing all the patients had in common was their inability to pay for their medical care. Under California law, no one is turned away because they are indigent.

The title of the film “Code Black,” is hospital-speak for a waiting room overflowing with all sorts of patients: young, old, male, and female, all with a compelling medical need. A 20 foot by 26 foot space in the hospital was provided by hospital officials and thus was born the country’s first “ER Unit”.

In the early years, the ER was referred to as the “C-Booth” run by the doctors and nurses with rules and regulations created by them based on the needs of the patients; ranking the care accordingly: Number one – heart attacks and similar traumas; Number 2 – life threatening injuries and situations; Number 3 – broken bones, etc. and Number 4 – coughs, colds, fevers, aches and pains, and the like. It is a fluid ranking and shifts according to the needs of the patients. In the C-Booth early scenes, it looks likes chaos reigns supreme. Doctors, nurses, and technicians work feverishly on patients on operating tables, sometime less than 1 or 2 feet apart. It looks more like a military mash unit in action. But it’s a controlled and organized chaos. Everyone knows his or her job and all perform as a well-oiled, calm, collected, and polite medical unit, despite the urgency of the medical procedures being administered.

Dr. McGarry’s camera also takes time away from the ER action to interview, not only group meetings, but one-on-one interviews with the doctors to get a larger sense of the needs of the medical community as well as its patients. Certain elements of our US Congress keep claiming America’s healthcare system is broken, while others deny there is anything wrong at all.

When the new LA County Hospital opened a few years ago next to the old hospital, a new paradigm was implemented. The age of a computerized society now wags the tails of American society and business. Records are now computerized, infinitely more information for insurance purposes must be gathered on patients and procedures performed. It may be automated for business performance, but the result is a separating of the time spent and the relationship between doctors and patients.

According McGarry,”… I hope the film will also provide some crucial perspective on the current healthcare debate. To see what it’s like to be on the front line of providing care in this country shows how difficult it is for physicians and nurses: try telling a patient that they need to see a specialist for their rotting foot, only to find out that the specialist will only accept a certain level of insurance. Or ask them to choose between being late for their night shift or wait yet another hour in the ER ( some spend up to 8 to 10 hours waiting to see a doctor or a nurse) in the hope that they will see a doctor, who may not have a permanent solution for their illness anyway.”

With an ever increasing proportion of patients using the ER unit as their only means of receiving medical help, the situations resonates with today’s viewers. Scenes in the film are being replicated in large urban cities all across America. “Code Black” is a visual wake-up call for America’s healthcare industry to come up with a fresh approach in serving the needs of its almost 320 million citizens.