Strange Window at Next Wave, BAM 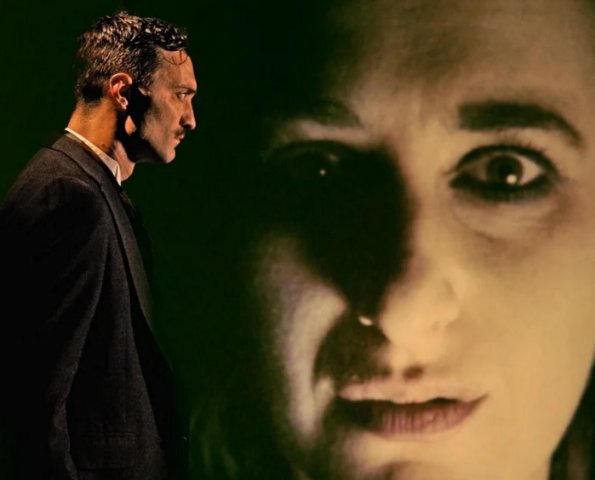 Strange Window:The Turn of the Screw at BAM 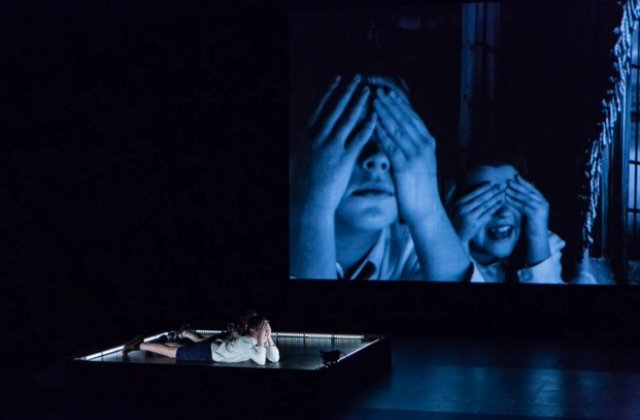 Joe Solava and Finley Tarr may not be there 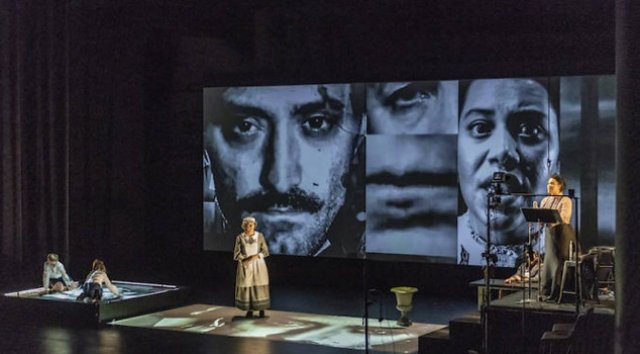 Moe Angelos, the housekeeper, center stage. The children are real. Other images may or may not be.

The Builder’s Association re-invented Henry James’ Turn of the Screw for today. Strange Window may take its title from a story James heard told by the Archbishop of Canterbury. A woman was so fearful of strange figures who appeared in the windows of her home that she moved to protect her children.

Now we are introduced to the proprietors of Bly as they interview a new nanny (Lucia Roderique). The lone James' uncle (Sean Donovan) is now part of a couple (Hannah Heller). They are busy lecturing around the world on reading emotional expression. They are too busy to tend a young niece and nephew, orphaned when their parents were killed in a plane crash. The audience laughed in nervous recognition as this dilemma was presented.

The prospective nanny is to take over the rearing of the children single-handedly. There will be no supervision, guidance or support. Fortunately, the ten-year-old boy is away at boarding school most of the time, so the nanny has just one charge.

Immediately on arriving at the remote country estate, Bly, a letter arrives. Miles has been dismissed from school due to unnamed infractions. The nanny imagines that he stole. The housekeeper (Moe Angelos) says simply, “Boys will be boys.”

An eerie calm encircles Bly. Miles (Joe Solava) and his sister (Finley Tarr) play about in what looks like a sandbox surrounded by small lights. It is their safe place to play. When they leave it, they are endangered, or so the nanny thinks.

Wandering down to the lake surrounded by reeds, projected on a wide screen at the back of the stage, the sky goes suddenly dark. Ravens hover about the roof of a distant building. A ghost appears. Miles reports that it is Quint, a valet who left his job.

Video projections continue to cover a screen. They provide images of the estate’s landscape, and also close-ups of the actors, often as they speak. It takes a while to realize that actors are often lip-syncing with moving mouths on the screen. Sometimes the nanny appears to be filmed in real time as she talks. We never quite know whether something is filmed live or has been previously recorded. This kind of ambiguity adds to the many other levels of doubt and confusion this story deliberately weaves. There is a delicious pleasure in not knowing quite where we are and what we are watching.

Everyone laughs once more when we are taken to a live presentation by the aunt on interpreting micro-emotions in the face of someone you need to understand. The house keeper’s face is scrutinized by the camera.

The sure touch of director Marianne Weems unifies the disparate elements of the drama. Dan Dobson’s original music is light on tones, yet its incessant beat thrusts us forward into more questions.

Curiously, the confusions of the story-telling after James become less troublesome in this world of film add-ons. Images and the rhythms of the voices, wondering whether these ghosts are real or not, keep us in their web. When Miles dies in the end, we don’t particularly wonder what caused his death. It could be murder by the ghost, the onset of some sudden illness, or the consequence of the unspoken deed he did at boarding school. His sister has already left Bly, so there is no reason for the nanny to remain with the ghosts or without them. The performances of all the principals were excellent.

More ambiguous than James, close up images and pastoral scenes leave us not only wondering what is real and what is not, but also questioning child rearing methods that remove parental involvement from the process, Ironically the surrogate parents are away from home to teach others about micro and macro emotions. Does any emotion ever feel micro to someone who is lonely or afraid?

Mystery in modern dress makes the re-working of James' story an enticing evening of theater.