From Train Tracks to A Public Art Walk 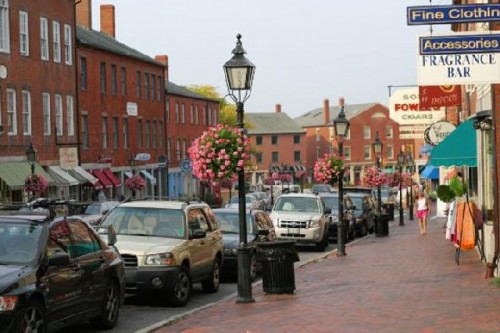 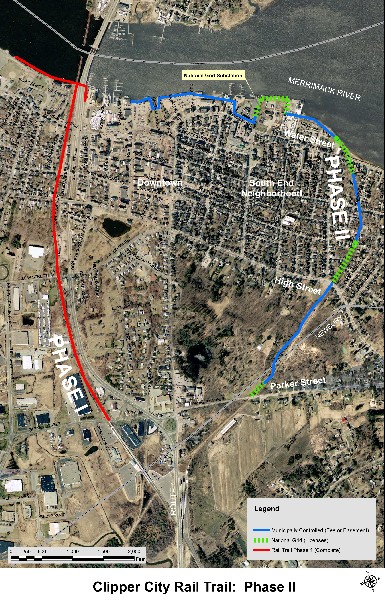 Rail Trail Map from the City of Newburyport. The completed trail is in red and the proposed continuation of the trail is in blue. 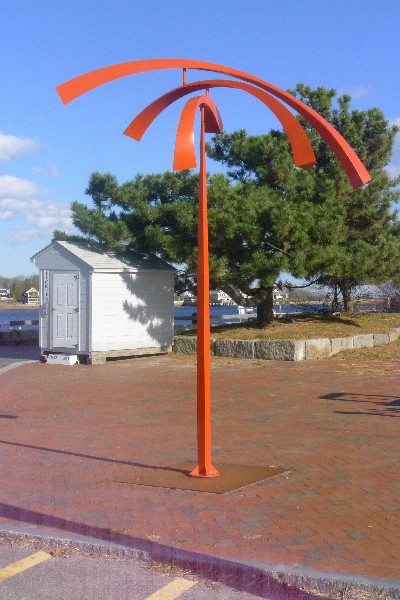 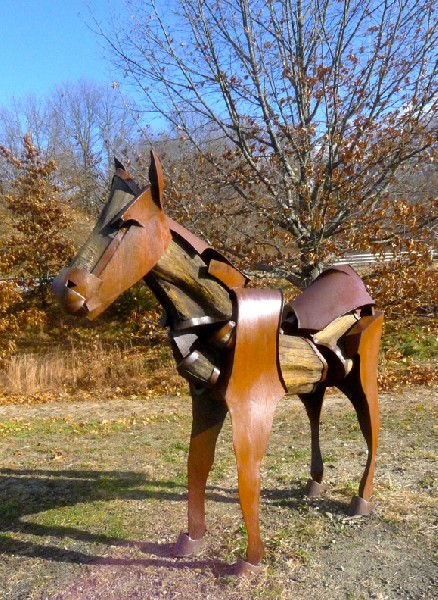 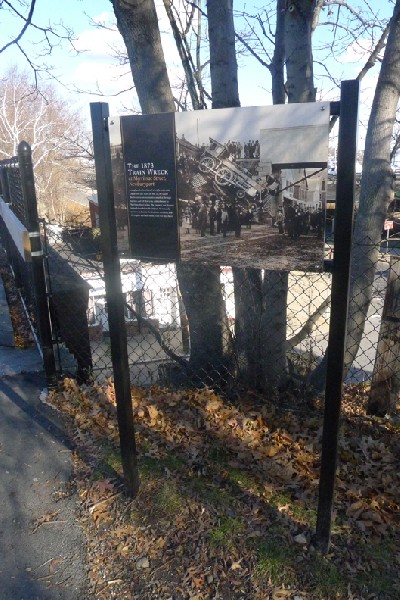 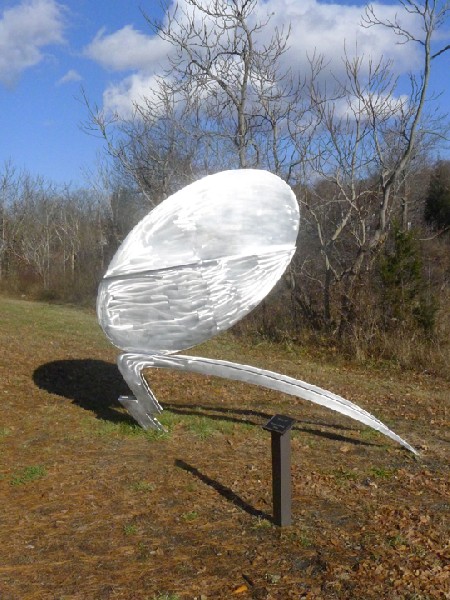 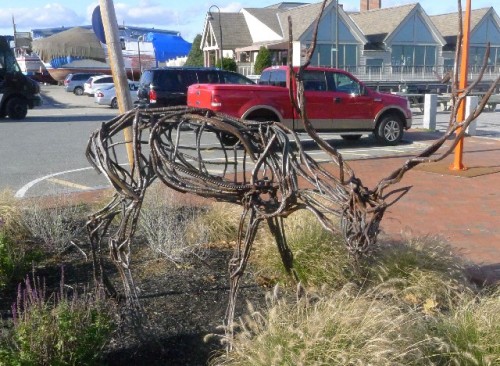 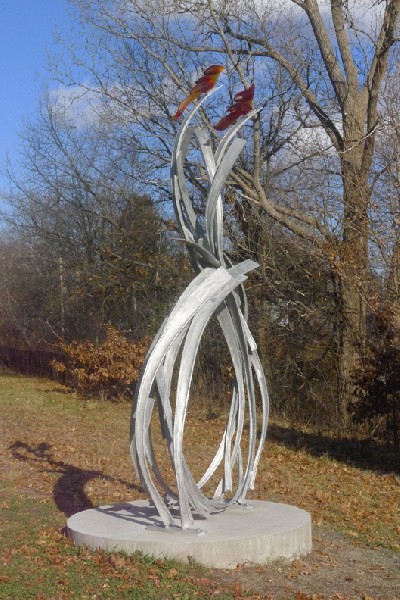 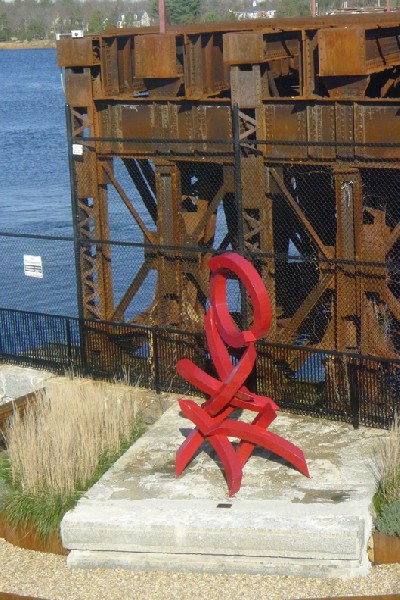 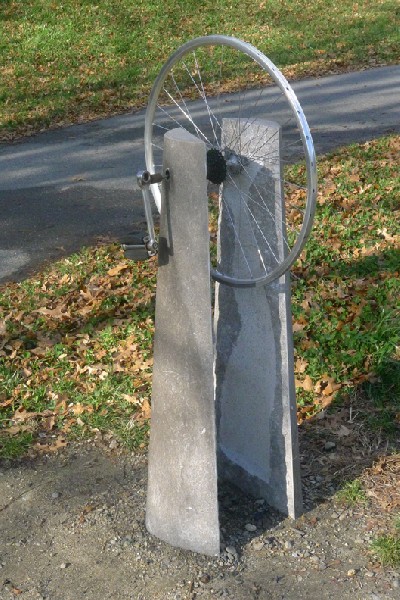 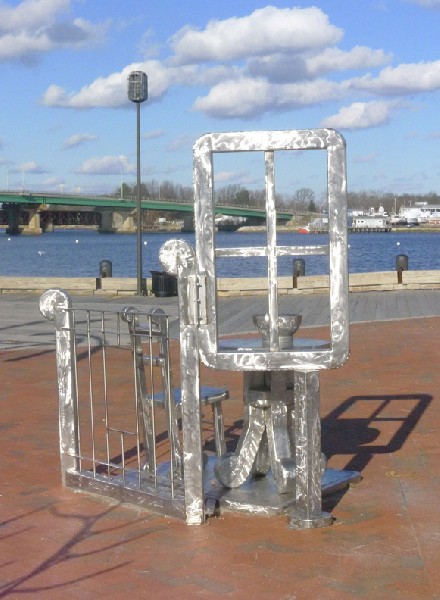 An Imagined Place By Robert Motes 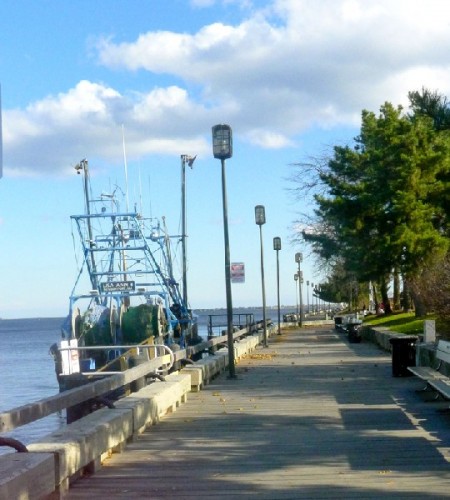 Unlike other regions of the country that seem to embrace public art as part of their identity and character, the number of serious public art efforts in New England would probably not add up to the total of our fingers and toes. One rare example is in the City of Newburyport, Massachusetts.

It is known as a quaint town on a picturesque harbor north of Boston. Tourists enjoy harbor visits with dining and shopping at its many restaurants and shops. The commuter rail line to Boston ends in a new station at Newburyport.

A few steps from the commuter rail station  is the Clipper City Rail Trail, a slightly longer than a mile pathway around the west side of the city of 17,000. It was named for the various schooners and sailing ships that frequented the harbor in the 19th Century.

This recreational trail was built upon the former right of way of the Boston and Maine Railroad. The B&M stopped its local trains there in the late 1960s.

The Clipper City Rail Trail is a pathway with a difference. With rhythmic placement of abstract and realistic elements, it is also a New England rarity--a public art trail. Opening to great fanfare in 2010, it has been a labor of love by the city's planning staff for over a decade.

The brainchild of Newburyport Senior Planner Geordie Vining, the combination of historical markers, plantings, a bit of strategic wayfinding, benches and public art has been developed into a path of both creativity and respite. Vining applied for appropriate grants to construct the rail trail and found private funding for the amenities including public art.

Conceptually, this project is ambitious and clever. Considering the limited resources that were available to develop it, Vining, with the cooperation and even sponsorship of a number of mayors, city councilors and city agencies, has done a yoeman's effort to foster this program.

Sprinkled along the trail are both permanent and temporary pieces. There are a variety of sculptural elements ranging from abstract to figurative and created from various materials.

Vining has addressed the issues of engineering the sculpture as well. Bases and foundations have been incorporated into the landscape to accept the structures and weight. Metal labels have been placed at permanent installations as well.

His ambitious notion to complete the trail by extending it around the harbor and the rest of Newburyport has great merit. The legacy of this project will positively effect generations of Newburyport residents and visitors.

Developing over the last few decades as local railroads diminished, today Rail Trails are a phenonmenon throughout the US. These trails are built upon old train rights of ways. They encourage healthier, more physically active lifestyles by making possible places to walk, bike and commune with nature or by discovering hidden aspects of urbanism.

Reinforcing healthier economies by promoting tourism and local businesses and perhaps even increasing property values, these reconfigured pathways support a healthier environment by making personal active transportation a viable alternative to driving. Probably, there are other benefits as well like community building and adding to the quality of life.

On a critical side, the Newbury Clipper City Rail Trail public art component has a number of problems aesthetically. The signage is somewhat uneven and inconsistant. There are lost opportunities in not having amenities like sculptured benches and perhaps even a creatively designed water fountain integrated into the trail.

The wooden gateway to the trail was also a creative opportunity not fully realized. Visually it is somewhat heavy-handed and rather ordinary. This may reflect the donation of the piece with little or no strong aesthetic specifications or oversight. And the whole idea of sense of arrival and sense of connection is a bit disjointed by different names of various sections of the walkway and inconsistent markers.

Additionally, though some of the sculpture is of high quality, several are mediocre at best. With limited resources, the effort was apparently to make the public art all things to all people with a few interactive and fun elements for children as well as querkier pieces for provocative discussion.

This is certainly debatable especially in a setting owned and administered by a municipality. The hope is that over time, the chaff can be replaced by more wheat.

That said, public art is a series of difficult curatorial and collecting decisions and tasks. Considering how enhanced the walking/biking even jogging trail is, the Clipper City Rail Trail is a winner. Aesthetically, opinions do differ as to the merits of various sculpture along this wonderful path.

Even in an institutional setting, public art can be controversial. In a truly public setting owned and administered by taxpayer funding, the public art controversy can heighten almost exponentially. It is the same old story of the arts being non-utilitarian, especially in times of reduced resources and economic downturn. But this argument is specious. Not really the point. Public art is about enhancing the environment and about being civilized.

Art programs are attacked by the nonunderstanding if not ignorant individuals often in a political way. Quality of life is enhanced by the quality of the arts of a society. Public art elements are visual focal point(s), pride of place objects creating a sense of shared experience with our environment. Like the City of Newburyport, we need to keep the Philistines at bay.

The Clipper City Rail Trail is a great statement of Newburyport's civic pride that celebrates the community, its past, its future as well as its continued civil and cultural energy.