Projection and Sound Design in Theatre 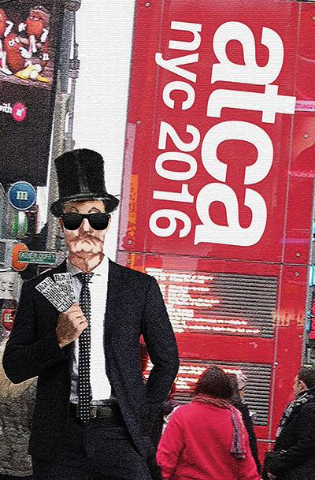 Projection design in live theater can aid in telling a story, a practitioner told members of a theater critics group recently.

The two individuals were members of a panel who addressed the American Theatre Critics Association (www.americantheatrecritics.org) at its recent mini conference in New York City.

Group members, who advocate for theater criticism and its future, discussed various issues, dined with stage stars, toured The Players, an historic private social club founded by actor Edwin Booth and heard from industry professionals about their work.

“See Me, Hear Me: Innovations and Challenges in Projection and Sound Design." The panel was moderated by Martha Wade Steketee, a reviewer and writer.

With constant innovations in technology, new tools are available for theater practitioners to tell stories in innovative ways. But just because resources such as new projection design capabilities are available, should directors always decide to use them?

Harrington said she does, up to a certain point.

“I agree...about the narrative element of projection design and that’s what I love about it,” she said, echoing Nigrini’s view that projections can enhance narrative.

But Harrington said too many scripts call for too much projection design.

If a cast and crew are staging the production of a work that contains, for example, “magical realism,” projections can help tell the story.

According to the Roundabout Theatre Company’s blog at www.roundabouttheatre.org, “novelists of this style allow fantasy to coexist with realism, so that boundaries are erased and neither reality nor fantasy is subordinate to the other.

“The re-envisioning of a ‘reality’ dominated by rationalism is a powerful artistic strategy to challenge the status quo and traditional, Western classifications.”

If a traditional piece doesn’t call for such a re-envisioning of its realistic flavor, you might want to leave out the projection design.

One current show that includes projections is “Dear Evan Hansen,” a new Broadway musical about a lonely teenager, a tragedy and a lie that grows out of control on social media.

“The piece itself is about the life of a young boy who’s suffused with social media and the Internet,” said Nigrini, who worked on projections for the musical. Because social media plays a major role in the show, there is a “very specific and appropriate use of media of this kind,” he added.

Without live theater elements such as lighting and projection, the design for “Dear Evan Hansen” “literally is just a collection of black objects,” Nigrini said.

BC Du Boff said her goal as a sound designer is to help tell a story without pointing herself out. In other words, her works should seamlessly (“invisibly” or “not noticeably,” if you will), become integrated into a production. That’s opposed to, say, audience members noticing projection and sound effects as much as they’re riveted on a Tony-worthy performance by a triple threat leading actor.

One could say theater practitioners, such as those on this panel, sneak their contribution into a production so that audience members are hardly aware it’s there.

“So then we need, like, an award for the sneaks,” Harrington joked.

She was referring to the fact that The Tony Awards Administration Committee doesn’t recognize projection and sound design as Tony categories, stating those are technical crafts rather than theatrical art forms.

Gromada said he feels he’s doing his job best when his work’s “invisible.”

When a production’s director is earning accolades, that alone speaks to how successful the work of projection and sound designers were, Gromada said.

“We make the images,” he said. “The core of my job is deciding what you will see.” That includes texture and color, he added.

One critic in the audience asked what constitutes bad projection design.

“We have a tool that is so powerful in a good and bad way,” Nigrini said. “Projection has that capacity to upstage anyone and anything. It’s about control and delicacy. We have succeeded when the human story is at the center of attention.

If projection stands between the audience and the human experience actors are trying to depict on stage, that is bad projection, he added.