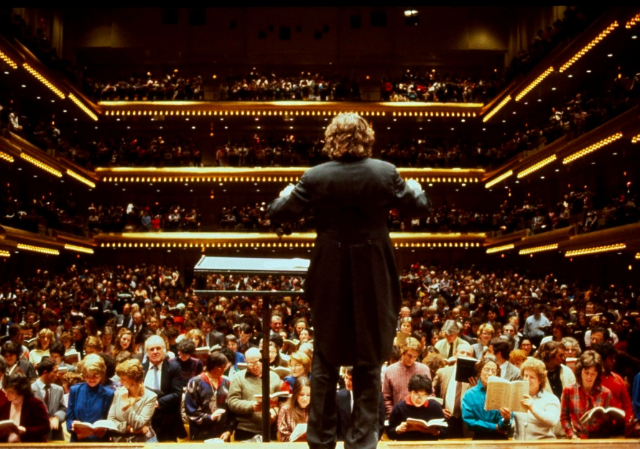 Hallelujah is the most familiar chorus from Handel's most successful and famous oratorio, The Messiah.  Dr. Everett McCorvey, who is at the helm of the National Chorale, suggests that his David Geffen Hall chorus of thousands rushes forward in song to get to that chorus as soon as possible.

Not so fast.  This is a popular oratorio because it holds many treasures.  Four soloists lead the way.  Counter tenor John Wesley Wright led "Every valley," a lovely moment early on.  Michael Nansel brought a deep and complex darkness to his arias, which are crowned by a delivery of "The trumpet shall sound," which outdoes the trumpet itself.  Soprano Joanna Mongiardo, draped in holiday red with twinkling ornaments on her ears, was positively celestial in her singing, "And suddenly there as the angel."  In tree-green taffeta, Holly Sorensen provided holiday greetings of the Messiah,  lushly sending them out into the world.

The chorus of thousands, one of the largest in the world, was led by sixteen difference conductors representing such institutions as West Point, St. Patrick's Cathedral, colleges and even high schools.  Each conductor introduced the chorus s/he led, many directing us to pay particular attention at the conclusion.

Don't mistake an oratorio for a hymn, that orderly construction of four voices usually singing simultaneously. Choruses are challenged by fugal and canonical effects. I benefited enormously from a neighbor with a clear, perfectly place alto.  A woman from across the aisle joined us because she had come without a score. The young man next to me was glad to share mine as he provided tenor support for the hundreds of tenors scattered throughout the hall.

McCorvey also leads the American Spiritual Ensemble.  Growing up in Montgomery, not far from Martin Luther King's home, his early exposure to music was in church.  Gospel music took off, but spirituals which are also part of the church liturgy, were left behind.  McCorvey has made a distinguished contribution to the survival of "Swing Low Sweet Chariot," and "Joshua Fit the Battle of Jericho."

In a concert earlier this fall, which McCorvey led with particular grace and style, I wondered why we did not see him more often in New York.  In fact, few black artists are represented on the stages of Lincoln Center.  The day before the concert, McCorvey commented in a telephone interview that he was committed to diversity in his own chorus and in his soloists.  Are they available?  If you go to a concert at the Peabody Institute in Baltimore, you see them.  Opera Philadelphia commissioned an opera from and about the black community.

Before the concert began, the audience was warmed up by a chorus from the Performing Arts High School. National Chorale is not only committed to giving a graduate audience opportunities.  They have spread out into all the neighborhoods of New York to bring young people together to sing.  If you're singing, you're not on Facebook.  You are next to another real person, interacting, sharing difficult passages and lifting your voice in joyful song.