Rosewater Could Have Been a Great Movie 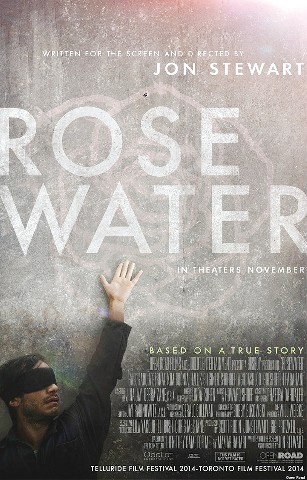 Poster showing Maziar Bahari (Gael Garcia Bernal) blindfolded as he often was during interrogation or in solitary confinement. 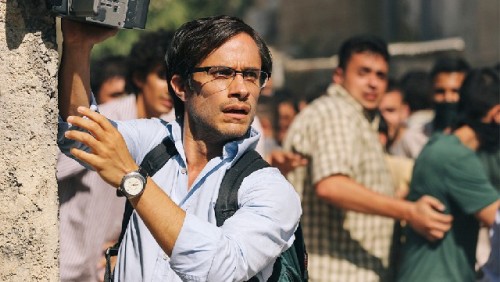 Bahari filming the scene of some shots fired at protesters. 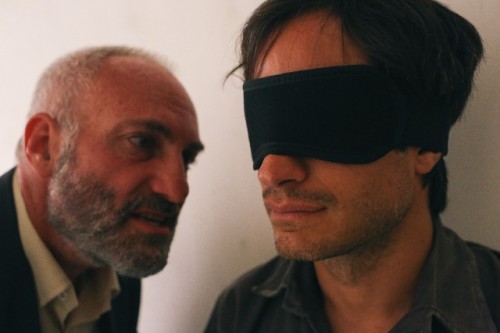 Bahari and his interrogator, a.k.a. Rosewater because when Bahari was blindfolded, he discerned a pungent scent of rosewater. 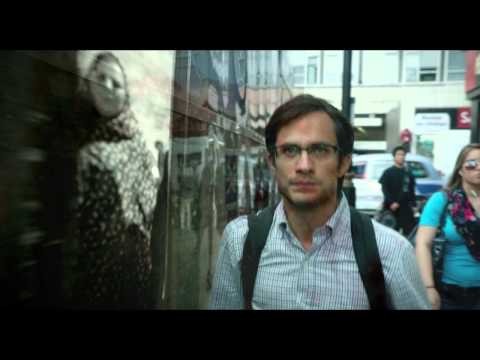 Bahari just before he recalls to the audience his sister who has just died. 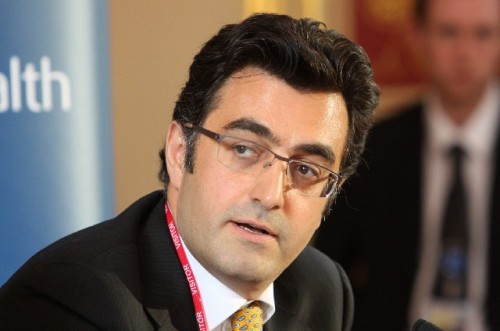 Maziar Bahari’s book "Then They Came for Me: A Family’s Story of Love, Captivity, and Survival" is the basis for the film, adapted by Jon Stewart.

Jon Stewart’s “Rosewater” about Iran shows and contributes  little to a cinematic, revolutionary spirit. It would be easy to look at any film from the Iranian New Wave and see that this film has almost no merit in terms of the revolutionary spirit or cultural-political commentary. These are the very things that Stewart has been good at in his television work.

The films gives us a portrait of Maziar Bahari, an international journalist working for a US magazine, who is played by Gael García Bernal (Bernal is Mexican). Bahari is set to cover the presidential election between Mahmoud Ahmadinejad, Mir-Hossein Mousavi, and Mehdi Karroubi. The film focuses mainly on Ahmadinejad and Karroubi who are viewed by younger generations as a dictator and a reformist democrat with good policies, respectively.

Ahmadinejad wins and is re-elected and this is disputed via protests all over the country which Bahari starts to film and report on. Previously in the week leading up to the election, he’d given a satirical interview to Jason Jones (a correspondent for The Daily Show) which the government of the Islamic Republic used against him as grounds for his imprisonment.

What follows for the next hour and a half is a series of complexly psychological interrogations, conversations with the ghosts of Bahari’s dead sister and father, and an international attempt to free Bahari.
The film errs  too much into poetic saccharinity with the ghosts inspiring hope in Bahari. Stewart is reminding him of the great things he did when they were alive and opposed to Islamic Republic under the Shah and the subsequent leaders. Bahari has a number of flashbacks that are perhaps as bland as flashbacks come.

The most morally problematic moments of the film are with the choice of actors and making film in English. These specific choices boosted the film’s marketability, no doubt, but it lacks integrity and authenticity. As noted above, Bahari is Mexican; his interrogator is Danish; and many members of the cast are Iranian but speak English.

This choice of actors is abhorrent in its disregard for realism and misrepresentation of Iranians. It would be better if the film remained largely unknown than to have had a cast of marketable actors. Iranian cinema, especially the New Wave, has tons of actors who could have played these roles, with a particularly emotional personal understanding of the subject in the film.

The film has a speech that clinches the whole moral and story of an oppressive regime into one pithy paragraph. While the speech by Bahari will give some viewers hope; many will find it repetitive and a cloying cliché. With regard to Stewart’s intentions in making the film and giving it this kind of hopeful yet empowering ending, there seems little room for comment. But one thing worth mentioning for the film is that hopefully people in the US will start caring in a sincere way about the oppressive nature of the Islamic Republic of Iran.