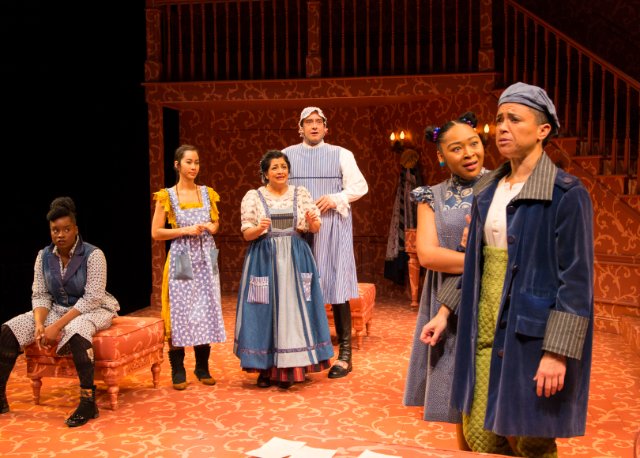 Her approach will either delight or infuriate you. She takes the basic outlines of the plot and characters and then rewrites them. This production which runs through Sunday, Dec. 22 showed the range of reactions, the night I saw it.

Delighted laughter and giggles from some of the audience and grim silence (or leaving at intermission) from others.

If you love Austen, as I do, your reaction may be influenced by how you responded to the idea of the film Pride and Prejudice Zoombie or how you might like to see the novel as a Saturday Night Live sketch.

Hamill has a formula for her works, which as an actress she often stars in. She pares the cast down, and encourages actors to double roles often of different genders. If My Fair Lady used a great deal of Shaw’s dialogue with the rest sounding as if it were his, she goes in the opposite direction. Very few lines were ever in the original and none sound as though they should be.

She has reasons for her decisions. She as stated that these she regards these works as feminist works and that her adaptations are meant to highlight both the oppression of women in the early 19th century and now.

She admits to turning these serious novels into farces with physical humor.

So that is what we have – the general outline of the Bennett family and their five daughters, though Hamill has eliminate Kitty. This middle class family in the England countryside is facing dilemma: when Mr. Bennett dies the house they have grown up in will pass to a male cousin, since the will states that only males can inherit. That cousin is Mr. Collins, a clergyman.

To Mrs. Bennett it is imperative that her daughter marry and marry well. So when a well-to-do gentleman (Mr. Bingley) and his sister rent a nearby house, she is determined that one of them, preferably Jane the eldest, capture his heart. Mr. Bingham is accompanied by his friend Fitzwilliam Darcy, for whom Elizabeth, the second eldest and the most independent, takes an immediate dislike to viewing him as stuck up and supercilious. Nor is he enchanted with the unsophisticated company and the obvious machinations of all the mothers of young women to find them matches.

If you haven’t read the novel or seen one the multiple film and television adaptations, let’s just say that true love wins out, Elizabeth learns that superficial manners can be deceiving and that she is as guilty of prejudice and pride as everyone else.

In this production directed by Jess McLeod, the tone and the performances vary tremendously. If none of the performers try for either the accents or the decorum of the period that is deliberate. Instead we get very contemporary mannerisms, tones and attitudes. At times it works. Aneisa J. Hicks as Elizabeth (or Lizzy as she is sometimes called) is direct and outspoken; so much so that she overshadows her sister Jane who pines for Mr. Bingley.

Biko Eisen-Martin is good as Mr. Darcy though he is more successful at portraying his haughty manner and disdain for the locals than the underlying shyness and goodness of the man. We have little hint that he will become the savior of both the Bennett family and the romance between Jane and Mr. Bingley.

But here is where the praise for the cast diminishes. Luis Moreno has three roles – Mr. Bingley who is portrayed as a figure of fun. In fact he reminded me of the “crossed garter” scene with Malvolio in Shakespeare’s Twelfth Night. He wears shorts and a ridiculous costume, seems obsessed by rubber balls and ends up behaving like a dog obeying his mistress, Jane Bennett. He is also the put-upon quiet daughter, Mary as well as a servant. Each is a more ridiculous characterization than the one before it.

Some other members of the cast who double roles are more successful. If Dawn Elizabeth Clements acts like a demented 10-year-old as Lydia, the man crazy youngest Bennett (she is 14), she is fine as the haughty Lady Catherine, benefactress of Mr. Collins and Darcy’s aunt. Octavia Chavez-Richmond has two unenviable roles: the quiet, bland Jane and then later as the veiled ailing daughter of Lady Catherine.

How many of the flaws of this production are built into the script and how many can be laid at the feet of McLeod, I’m not sure. Later this season, Playhouse on Park is also producing this work; after that production I’ll have a better idea of how the blame can be apportioned.

But in the program notes, Artistic Director Jacob G. Padrón, heaps praises on e“the glorious vision” of McLeod. He also states that the adaptation is “ultimately, deeply moving.” On that, I can agree, but not in the way he intended the statement. This adaptation and this production did not move me at all in the sense of giving me an emotional experience and characters that I cared about what happened to them.