Actors' Playhouse at the Miracle Theatre 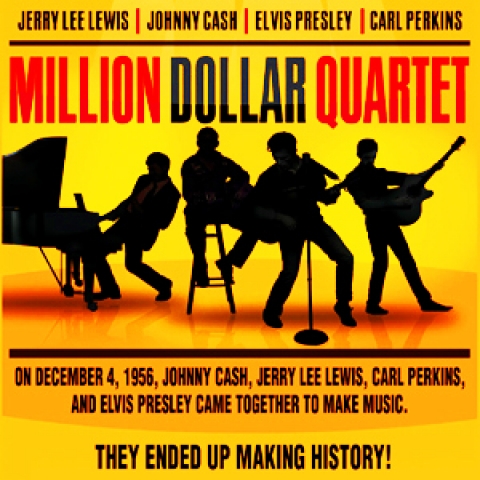 Goodness, gracious, great bursts of fire radiate from the upstairs stage of the Actors’ Playhouse at the Miracle Theatre in Coral Gables, where the stirring musical “Million Dollar Quartet” is enjoying an electric production through Jan 1.

The Tony Award winning show, which enjoyed a Broadway run, dramatizes a real-life historic jam session between rock stars Elvis Presley, Carl Perkins, Johnny Cash and Jerry Lee Lewis at Sun Records Studio in Memphis, Tenn. on Dec. 4, 1956. It was a milestone collaboration during rock ‘n’ roll’s beginnings at a time when many frowned upon the musical style as "the devil's music."

The session, which brought the four icons together for the first and only time, happened 60 years ago, adding to the musical’s timeliness.
Curiously, director David Arisco has chosen to stage the show in the smaller playing space, rather than the mainstage.

The result is a vibrant but loud, almost deafening sound that your eardrums might not appreciate. Staging the play on the 600-seat mainstage would seem to make more sense than the 300 seat Balcony Theatre. The blasting noise, no doubt, makes it easy to hear the performers, but not necessarily to understand them at times. At least once, it was hard to hear the actors as they talked over music and at another point, they didn’t wait for applause to completely subside before speaking.

“Million Dollar Quartet” requires performers to be “triple threats"; they must convincingly embody their historic character without impersonating them, while displaying strong, clear singing voices and the ability to play their character’s respective instrument. While this isn’t a dance-heavy musical, showcasing some nifty dance moves animates the proceedings.

Each performer, for the most part, proves up to the task. The actors largely shine, whether their characters are in harmony  or bickering. Although Dec. 4, 1956 proved one memorable, historic night, personalities often apparently clashed.

“Million Dollar Quartet” is a jukebox musical with a thin plot and little backstory for the characters. Still, it tells a  true tale of pride, dedication, loyalty, perseverance and bonding through a mutually-shared talent. There's plenty of tension, which keeps our attention as much as vibrant performances of the varied songs.

One of the recurring conflicts pits pianist Lewis against singing- and guitar-playing sensation Perkins. He's written as proud, self-centered, intense and prone to being hostile. He openly ridicules the wild, vivacious and eccentric Lewis.

As Perkins, Jeremy Sevelovitz invests the character with an argumentative demeanor, playing him with an impulsive, belligerent air.

Dominique Scott brings a wild aura to Lewis, standing and kneeling on the piano bench while playing the keys and even playing the instrument with his legs.

Scott conveys a man-child like vivacity and his costume matches his colorful character  (peach-colored dress shirt and plaid, dark paints, designed, along with the other character-appropriate costumes, by Ellis Tillman.)

Scott has boundless energy and a wide arsenal of comic tools to play this somewhat cartoonish character and makes good use of them without quite crossing the line into caricature.

While Scott’s Lewis is like a runaway, unpredictable roller coaster, threatening to zig here and zag there without notice, Eddie Clendening, slick black hair and all, brings a cool, calm air to Elvis Presley. He never tries to mimic “The King,” but it wouldn’t hurt for him to crack one of those signature charming Presley smiles once in a while.

As laid back as Clendening is, you'd never know it from his strong singing. He belts the lyrics to songs such as “That’s All Right” and, of course, “Hound Dog,” while demonstrating some sweet moves.

Some of the songs are contextualized into the plot, which helps keeps this show from being little more than a concert.

The actors sing several songs as a company. One of those highlights is the opening song, “Blue Suede Shoes,” sung with infectious ardor. The song belongs at the beginning, as it catapults the story into action. Perkins is suffering a musician’s version of writer’s block following a performance of “Blue Suede Shoes.” Sun Records’ founder Sam Phillips (Jim Ballard) has arranged a recording session for Perkins to help him regain his form. As part of Phillips’ effort, he brings in Lewis.

The musical is narrated by Phillips, who tells the story in flashbacks. They demonstrate how he discovered each member of the quartet.

‘”You wrote a song about your shoes?” a disbelieving Phillips asks Perkins.
We, as the audience, can’t help but laugh with foreknowledge; we know that song about Perkins’ shoes will become a big hit.

During another comical moment, Lewis says, “These fingers of mine have got brains of their own.”

“Is that what they’ve been hiding?” Dyanne retorts.

The show comprises comic and serious moments, both handled with flair by the cast.

Jim Ballard, speaking with a convincing southern drawl, endows Phillips with a sense of urgency. Most importantly, Ballard convincingly conveys Phillips’ indomitable spirit, even as he wipes his forehead in exasperation during trying moments.

Arisco deftly establishes contrasting moods. He’s also implemented appropriate character actions, such as Phillips placing a reassuring hand on the shoulders of the quartet members --- suggesting that Phillips cares about and is devoted to his artists, much like a players’ coach.

Gene Seyffer’s workable scenic depiction of Sun Records' studio appropriately contains a yellow, curving wall as its backdrop, with the color suggesting the sun. A sign for Sun Records could be more prominent; it blends in too much with all the other photographs. You'd think someone as proud as Phillips is of his studio would desire a more noticeable sign.

Seyffer’s set is lit by Eric Nelson, who finds contrast with varied colors and intensity, depending on the moment and mood.

The mood is upbeat after the curtain call. As encores, the performers don shimmering outfits and treat us to more music.

There is a story, however thin, in this jukebox musical, but audiences likely fall moslyt for those golden, million-dollar songs.