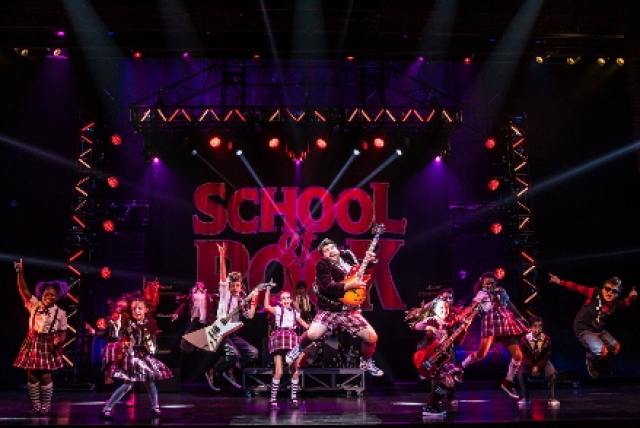 (Photo by Matthew Murphy) The kids of School of Rock perform with their inspiration, "Mr. Schneebly." 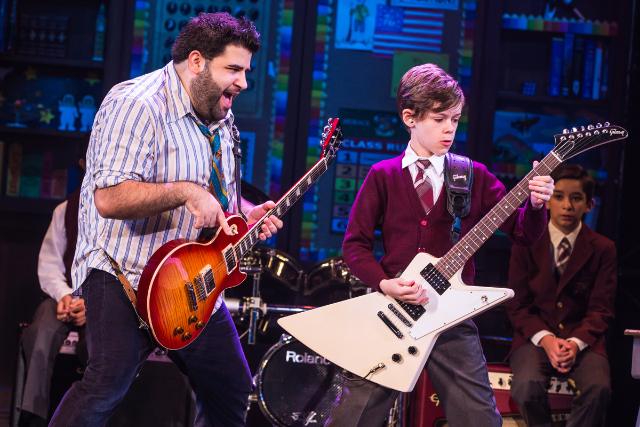 (Photo by Matthew Murphy) Rob Colletti and Phoenix Schuman as Zack, the guitarist

When School of Rock opened as a movie musical in 2003 and as a faithful, if somewhat formulaic Broadway stage musical in 2015, it was hard to question its relevance.

The importance of the arts in education, the need for youth to find healthy outlets to express themselves and their parents to listen and encourage them are timeless issues.

These days, as many people seethe with anger and frustration in a divisive country, there seems to be an increased need to rebel, to protest, to “Stick it to the Man.”

That is the title of one of the stage musical’s hard-charging songs. “The Man” (or woman) here symbolizes an unpopular authority figure.

The individual is someone who might stymie expression and establish unfair rules. Surely, as 2017 winds down, many people can identify such a person. Therefore, as pumped as you may have felt while viewing the stage musical on Broadway, an extra jolt of adrenaline surges through you this time around.

The scorching, invigorating Equity tour of the Broadway musical is rocking the Broward Center for the Performing Arts in Ft. Lauderdale through Christmas Eve. It will then shake the foundation of theaters in different parts of the country.

A stifling environment not unlike that in Spring Awakening permeates the air as prim principal Rosalie Mullins (an excellent Lexie Dorsett Sharp), maintains an aura of military-like discipline. Indeed, some of Webber’s stately songs revealing the school’s atmosphere suggest a march. As you witness the child performers sing and move to these songs in this touring production, you feel as though you’re watching the von Trapp children responding to their father’s whistle.

Those majestic, military-style songs contrast markedly with the vibrant, pulsating numbers. JoAnn M. Hunter’s choreography deftly conveys the characters’ emotions as they move to the music. The actors jump up and down, landing hard on the ground, stomp their feet and pump their arms or fists. It’s obvious they’re playing youngsters who feel free to keep their frustrations, feelings and expressions in no longer.

They’re releasing pent up feelings thanks to a man known to them as Ned Schneebly. He’s really Dewey Finn, a lazy, unemployed rock band member who’s been kicked out of his band and cannot pay the rent to continue to live with his landlords. One of them, the real Schneebly, (Matt Bittner, as a nebbish of a man who's easily pushed around) is a substitute teacher at Hoarce Greene.

So what’s a man to do who needs money and happens to live with a substitute teacher for a prestigious prep school paying good money? Why, he pretends to be that teacher and convinces the principal that he’s really Schneebly. Before you know it, he’s the man in charge in a classroom full of 10-, 11-year-olds whose parents ignore them. They’re in desperate need of an outlet for expression/rebellion. “Schneebly” provides that outlet, as he’s discovered a “battle of the bands” the students can enter.

The boys and girls begin to relate to their pretend substitute teacher’s unapologetically rebellious, hyper demeanor. He’s essentially one of them, only in a grown-up body.

Jack Black deftly played the part in the 2003 movie with a wide-eyed, fiery intensity and robust physicality.

For the reviewed performance of the stage musical’s national tour, Rob Colletti, who plays the role on most nights, matched Black’s success without mimicking the film actor. Colletti made the part his own. For a big individual, this man can move. He slides across the stage on his knees following a running start, jumps down from desks and beds and leaps.

As part of director Laurence Connor’s smart staging, “Schneebly” stands on tables or lie on his stomach in the classroom. This all reinforces his lack of social skills and slovenly manner, accentuated by his untucked shirt (Louizos designed the character-appropriate costumes while Natasha Katz’ varied lighting provides focus, emphasis and enhances mood).

An intense Colletti often conveys a shameless, wild manner, befitting his character. However, Colletti imbues "Schneebly" with enough convincing sincerity and purity that we never fear for a second that the children are with a pervert or a kidnapper. Colletti also imbues his character with a conviction that would make anyone want to succeed.

Principal Mullins is “Schneebly’s” opposite, at least from initial appearances.

As the head of the school, a tall, imposing Sharp commands the stage in presence and, well, a sharp, no-nonsense voice. In posture, Sharp stands stiff and walks tall, with pride and more than a hint of a superior air. Cross her at your own risk.

But there’s more to Mullins than her exterior. Sharp skillfully reveals a more casual, music- and fun-loving woman. She wonders in song wistfully “Where Did the Rock Go.” What happened to “the pounding of the drums in my veins…I can still remember, how the music used to be. Chords like rolling thunder, loud beyond control, every note and lyric branded right across my soul.

“Where’s the magic of the moments only rock could ever capture? Now the only thing I’m hearing, are the echoes disappearing.”

In short, Sharp seamlessly transitions from a strict villain to a rebellious, fun-loving, relatable person inspired by “Schneebly” to unearth her own true feelings.

She begins to root for and care about the children’s performance in the band competition That’s more than you can say about their parents, who apparently have no time in their life for their children. Either that, or they just don’t care. The parents are a stricter, less comical version of the Wormwoods in Matilda.

One of Lloyd Webber’s gentler songs, “If Only You Would Listen,” nicely captures the children’s hurt, sad feeling that their parents abandoned them. The song starts as a soft melody but becomes more angry in tone. The children direct the lyrics at their parents, speaking to them as though they were present.

The latter words obviously literally mean the children will one day play for them and their parents will witness their musical talents. However, these days especially, the words carry a scary implication; one day, if their parents continue to ignore them, they’ll “make them hear” by doing the unthinkable. The rash of suicides among bullied, ignored youth or even school shootings come to mind.

Among the child actors, the standouts include Gianna Harris as Tomika, an insecure girl with a load of talent. Harris’ rendition of “Amazing Grace” will drop draws with her deft voice control. She emits a sincere expressive and strong sound without it sounding forced.

Ava Briglia shines as Summer, a studious girl who desires the education her parents are paying for. Ava, speaking with a voice oozing with confidence, convincingly conveys a precocious, no-nonsense, opinionated, even commanding personality.

The youngsters prove to be quadruple threats; they can sing, dance, act and play musical instruments (there’s also an impressive live pit orchestra). While collectively, the youngsters are stronger as an ensemble than as individual actors, they deserve commendations.

So does Lloyd Webber, who recognized the increased musical possibilities and created a varied, memorable score for his stage adaptation (the film features music by artists such as The Who, The Doors and No Vacancy).

The main difference between the movie and the stage musical is Lloyd Webber’s songs. The music, along with Glenn Slater’s smart lyrics, deepen character and mood.

If you’re not already in the mood to express what’s on your mind, that’s O.K.

This show, and its in-your-face music, will have you ready to “Stick it to the Man” (or Woman) by the time the curtain falls.

School of Rock: The Musical runs through Dec. 24 at the Broward Center for the Performing Arts, 624 S.W. 2nd St. in Ft. Lauderdale. For tickets and showtimes, visit www.browardcenter.org or call (954) 462-0222. For touring venues, times, dates and ticket prices, visit https://www.broadway.org/tours/details/school-of-rock.