The Year to Come by Lindsey Ferrentino

At the La Jolla Playhouse 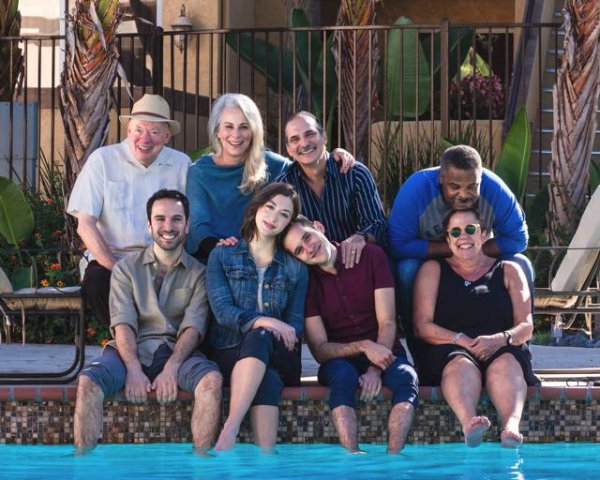 Cast of The Year to Come relaxing by the pool. Jim Carmody photo.

Playwright Lindsey Ferrentino apparently felt the urge to inform audiences just how disparate are families and their need to share their ubiquitous stories with the world at large.  Television has been the delivery system that best gets the comedy job done.  Sitcoms have mastered the medium for more than 70 years.  The one true American playwriting comedy genius was Neil Simon. He’s gone now and we now await the next King or Queen of comedy to arrive.

Yes, it’s true. Everyone does indeed have a story or stories to tell. Some exploration every now and then is necessary as social mores evolve and change. But I’m not quite sure that Ferrentino’s comedy play “The Year to Come”, is the vehicle to bridge so many gaps facing our ever changing society.

The current production on the stage of the Mandell Weiss Theatre is helmed by seasoned veteran director Anne Kauffman who’s directing credits are solid from coast to coast.   The story format, however,  is a little unusual, but intriguing in that the story unfolds in reverse – somewhat similar to Jason Robert Brown’s musical “The Last Five Years”. His format begins in the middle and works towards each character’s end game.

Ferrentino’s ensemble cast story is set in Florida and New York covering a decade beginning in 2018 and concluding in 2008.  Audiences also have to bring their best listening skills to stay engaged or one could get lost in the progression/regression thread of the story and format. The story In short, centers around an extended family of eight who meet every New Year’s Eve to watch the Fireworks and celebrations on TV. In between they gab, they needle each other, and catch up on the latest gossip and politics.  With plays of this type, one can expect tensions to rise resulting in defending turf and deeply held opinions and the usual hot button issues of the day.  It’s standard TV sitcom fare without the laugh track.

The talented ensemble cast of this production is working hard but doesn’t get the end game payoff they deserve, includes: recognizable actors from TV and stage appearances include: Jonathan Nichols as Frank, an Archie Bunker-type retired fireman, and family patriarch; his wife Estelle, played by Jane Kaczmarek, their gay son Jim played by Adam Chanler-Berat and Jim’s significant other Sinan, portrayed by Pomme Koch,  Franks’ son-law Joe, played by Ray Anthony Thomas and his wife Pam played  by Marcia DeBonis,  and grandfather Pop-Pop, a retired musician and stand-up comic portrayed by Peter Van Wagner, and Jenna Dioguardi, as the Performer, complete the cast.

Creative artists, actors, producers and writers are always on the lookout for smart, sharp, fresh plots and dialogue.  With only 36 generally acknowledged story plots to draw from, it’s no wonder that we see so many revivals on Broadway and sequels in movies and TV. Good writing is hard work.  Right now our world is a fraught and troubled place.  We need less amped up chaos and action-oriented movies  – that are merely chewing gum for the eyes and ears – and more emphasis on plays that reflect the intellectual rigor that becomes good writing and  makes  audience entertainment choices easier and more enjoyable.

Corny as it may sound, we need more writers in our ‘playwright pipeline’ that can chase away the blues and ‘downer’ stories while delivering situations and dialogue that appeal to our better angels.  Walt Disney-like movies are not the answer either. We all need a varied diet be it food for our bodies, or less chaos in the human emotions and feelings that stimulate our brains.  After all, variety is supposed to be the spice of life.

“The Year to Come” story and production comes across to me like old wine in a new bottle that’s unevenly written.   I couldn’t settle in to root for any of the characters and that’s not a good sign.  Perhaps, it was a case of opening night jitters but the pacing as well, was on and off, and a few lines and cues seemed to be late or dropped.  In addition, I overheard a couple during intermission say “I don’t remember people speaking like that, do you?”  The dialogue for the years covered does seem a bit socially anachronistic at times (and I only counted 21 F-bombs being hurled from the stage).  Whatever happened to the playwright’s best friend – a thesaurus? Alas, hope springs eternal.

“The Year to Come” performs in the Mandell Weiss Theatre and runs through December 30, 2018.