2017 London Production to be Live Streamed 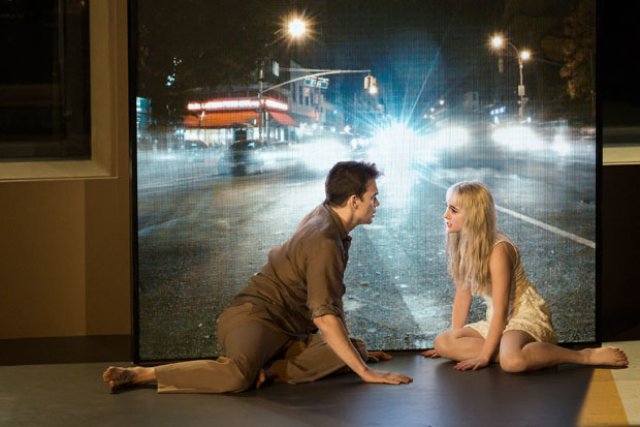 One of my favorite plays in the year 2015 was Lazarus. It was wild, wild, wild, and I fucking love it! If it was single I would have asked for its hand in marriage. I fully expected it to move to Broadway. Unfortunately it never did.

Written By Edna Walsh, all of the songs are David Bowie's. As luck will have it, the London Production, filmed in 2017 is available for streaming from January 8 - January 10. http://bway.ly/s8n1vo

I spent a week researching and writing my 2015 Bowie Lazarus review and just as I was about to file it with my editors the radio announced that David Bowie died. This news was a punch in the stomach.

The only experience that came close to this was when Dora Maar died in 1997 and my magazine editor at The New Art Examiner in Chicago, knowing how much I loved Dora (as did Picasso), asked me to write her obituary. And I did so, with tears in my eyes.

The Reviewer’s Note Below appeared at the top. For the record I am still missing Bowie.

Reviewer’s Note: The majority of this review was written last week, as Bowie released Blackstar, his 25th album, on his 69th birthday. It was only this morning I learned of his passing, and that he had quietly been battling cancer for 18 months. Of course, having spent some 25 hours in total immersing myself in Bowie research—so much so that it seemed I became Bowie – as ‘making us Bowie’ has always been his strength—I was devastated. It was like part of me died, which indeed it had. As a result, the tone, as well as the reception of this review, will likely change for anyone reading these words today.

STREAMING: Lazarus, Starring Michael C. Hall and Sophia Anne Caruso. "The filmed 2017 West End production of David Bowie and Enda Walsh's Lazarus will have its exclusive streaming premiere January 8-10, marking both Bowie's birthday and the fifth anniversary of his passing."

The filmed West End production of David Bowie and Enda Walsh's Lazarus, starring Michael C. Hall, Sophia Anne Caruso, and Michael Esper, will have its exclusive streaming premiere January 8-10, marking both Bowie's birthday and the fifth anniversary of his passing.

Written by Bowie and Walsh, Lazarus was inspired by Walter Tevis's novel The Man Who Fell to Earth, and starred Hall as Thomas Jerome Newton, the character Bowie portrayed in the 1976 film adaptation of that book.

Gabrielle Brooks (The Book of Mormon), Sydnie Christmas (Kick Ass 2), Richard Hansell (A View From The Bridge), Maimuna Memon (Into The Woods), Tom Parsons (Once) and Julie Yammanee