Hearing and Seeing As Part of the Visual Arts Experience 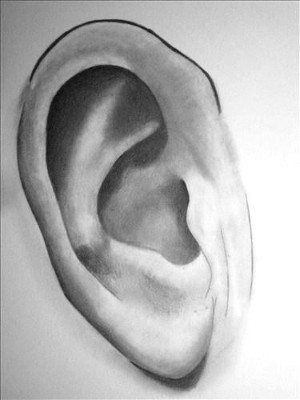 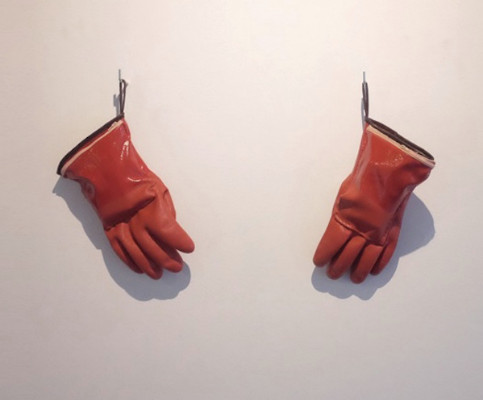 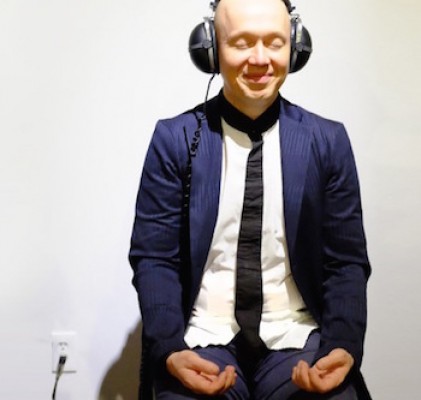 We see fireworks before we hear them. It is part of what makes them so mesmerizing. Seeing is faster than hearing—the speed of light is faster than the speed of sound. This disjunctive juxtaposition of sight and sound is at once fascinating and somehow strangely intuitive. A very thoughtful and quite beautiful gallery show explored this intriguing relationship.

Boston Cyberarts Gallery presented Curious Sound Objects – Selected Works (September 25 through October 25, 2015 Located at the MBTA Station at 141 Green St, Jamaica Plain), the latest in an ongoing series of exciting art exhibits that feature multi-sensory, interactive art objects. The project developed out of a desire to establish an outlet for myriad interactive sound forms that initially came out of Cambridge and Somerville, MA. The evolving show included international artists as well.

Curious Sound Objects was brilliantly curated by Nickolas Peter Chelyapov, who provided the following rationale for his choices: “Why is a dancing flame or the churning of the ocean so mesmerizing? Our minds experience things and reduce them—they ‘chunk’ things. Yet flames and waves defy us: always in flux, our minds can not “thing” them. We ‘chunk’ a painting or sculpture because we can see where it begins and ends, but sound is only experienced in the now.”

Curious Sound Objects showcased works that sit at the intersection of art and science as well as aesthetics and technology. All of the works here emit some form of sound. Each piece interacted with visitors and celebrates various forms of self-expression through sound, music making, and community involvement. The project extended the range of the contemporary art landscape: sound works that ask for audience participation are melded with visual culture, along with music and raw sound. There is a strong element of performance art in the show as well.

Composed of nine artworks by a talented and diverse group of accomplished artists, each piece reflected on various creative aspects of materiality—sound, spatial relationships, and interactivity. The artists include New York City-based Ranjit Bhatnagar, the team of Don Blair (a Fellow at Public Lab and a Research Affiliate at the MIT Center for Civic Media) and Sands Fish (data scientist and computational artist), W. Benjamin Bray (media artist working in earth science and technology), and Chris Chronopoulos (researcher and developer with a background in astrophysics, currently working on embedded systems).

Additional artists in the exhibit included Eric Gunther (a founding partner of Sosolimited, an art and technology studio), Jeff Lieberman (who explores the connections between the arts, sciences, education, creativity, and consciousness; he has hosted Time Warp on the Discovery Channel), Thessia Machado (originally from Brazil, she focuses on the simpler mechanical aspects of things), and the creative team of Jason Tucker and Michael Degen (a design and technology collective dedicated to creating innovative spaces and objects).

Most of the works of art on display were group efforts, a teaming-up of artist and technology specialists. Because of the highly technical aspects of these works, this is art at its collaborative best.

A number of the exhibit’s pieces were simply outstanding. And unlike most other gallery or museum exhibitions, Curious Sound Objects invited you to touch each of the works.

At the front of the galley, Jeff Lieberman’s elegant and spectacular Slink (2004) was a beguiling pictorial piece that demonstrates—through line and movement—the exquisite shape of sound waves. Sound becomes sight when the viewer steps on the piece’s foot switch. Inside of Slink, a custom linear motor vibrates a spring at ~60Hz, which causes the spring to resonate in a standing wave. By varying the frequency and relative phase of the banks of strobes, the spring can be made to appear to hold stationary, move, dance, or split into parts. Exploring our unseen interconnectedness and interdependence, there is an uncanny linear beauty to Slink.

Chris Chronopoulos’s Methuselah’s Muse (2014) was also a crowd favorite. An experiment in generative music through the use of cellular automation, the piece’s buttons ran an interactive ‘Game of Life’ simulation. Here birth, death, and other events that are inputted trigger various audio samples. Faster input or polyphony causes neighboring cells to interact and evolve, leading to emergent phenomena like gliders, oscillators, and methuselahs—each with their own musical signature. This piece made everyone smile.

Michael Degen and Jason Tucker’s Tension (2015) sought to explore the emotions of anxiety, worry, and questioning. The piece embraces the ebb and ?ow of these emotions, visually and audibly expressing both stimulation and relaxation. Thessia Machado’s (((rooomtone))) (2013) takes 1970s analog telephones and electronics and breaks them apart, wiring the mechanical remains into a poetic (and quite Calderesque) wall relief. Eric Gunther’s A Seated Catalogue of Feelings (2012) deals with memories, sounds, and sights that make us smile while remembering experiences in the comfort of an ordinary chair. Here we could fall backwards naked into a bathtub of cold jello, sit inside Miles Davis’s trumpet, and feel that we are being trampled by horses. It allowed us to visit strange parts of our psyche that are usually off limits.

Skull Whispering by Sands Fish and Don Blair (2015) made use of wireless technology and mobile devices. Through a bone conductor, two individuals were invited to connect to each other in an intimate yet weirdly disconnected arrangement. One station acts as the transmitter; the other as a private recipient. Sounds reverberate through the recipient’s skull. Making use of a pair of rubber gloves, the installation showed how the walls between our minds can be erased.

For decades, Boston Cyberarts has encouraged and fostered the development of innovative practices in contemporary artmaking. Located in the Green Street Station on the MBTA’s Orange line in Jamaica Plain, Boston Cyberarts Gallery is the only independent art organization in Massachusetts that focuses on cultivating experimental art through the use of media. Curious Sound Objects was a wonderful example of the group fulfilling its mission. Focused on bewitching our eyes and ears, this superb interactive gallery exhibit touches our senses and our emotions. It is a magical interplay of seeing and hearing in new ways.