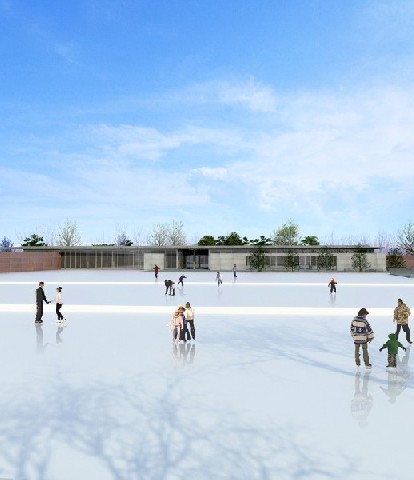 When and if there will be skating at the Clark this winter remains vague.

Any way you slice it from free to twenty bucks for adults is a heck of a jump.

Traditionally the Clark Art Institute has been free during the slow off season.

As we reported in The Clark and Mass MoCA Stiff Locals not anymore.

Below Sally Morse Majweski, a spokesperson for the Clark, clarifies some of our reporting.

It is intersting that there is no response to the major point that the auditorium remains closed. No date for reopening is offered.

That means that there are no scheduled concerts or the popular Live in HD Met broadcasts.

Ir remains vague when and if the much anticipated winter skating will begin.

What follows are the Clark's responses to our coverage.

There is plenty of winter programming:

Now, good grief, the Clark is announcing that as of January 1 it will charge $20 for adult admission as well as another $10 to view the special exhibitions.

Through 12/31 there is a $10 fee for the Monet | Kelly exhibition but the permanent collection is free. As of 1/2/15 the admission will be $20 and WILL INCLUDE ALL SPECIAL EXHIBITIONS. THERE IS NO EXTRA FEE FOR MONET | KELLY AT THAT POINT.

With no explanation there will be no skating. Bummer.

Would have been happy to explain, had you asked - We are still hoping to offer skating this winter, but the reflecting pools are still being commissioned so we cannot commit at this point.