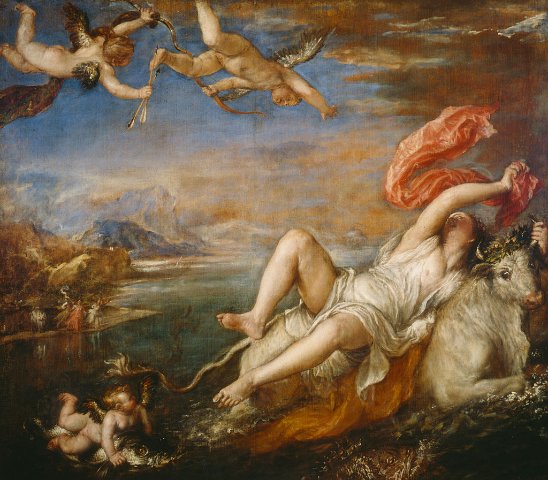 Titian's Rape of Europa prior to cleaning. 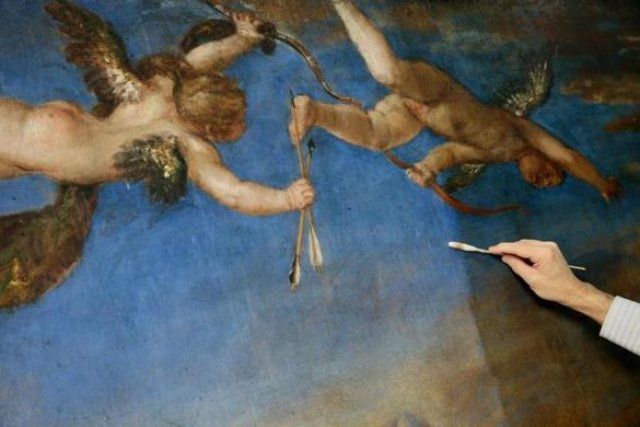 On the evening of March 18, posed as Boston cops, thieves conned their way into the Isabella Stewart Gardner Museum on Boston’s Fenway. The guards who were overwhelmed had violated security protocol.

With cruel efficiency they looted 13 works from iconic to knickknacks. Working quickly they cut from frames paintings by Vermeer ("The Concert") two Rembrandts (“Storm on the Sea of Galilee," his only seascape, and “Lady and Gentleman in Black”) as well as works by Degas, Manet and Flick.

The will of Isabella Stewart Gardner (1840-1924) was specific. Everything was to remain exactly as she installed three floors of public rooms in her mansion. The top floor, her living quarters, was unrestricted. Were any of her intentions violated the palace and entire collection were to be sold with proceeds donated to Harvard University. Nothing was to be deaccessioned, acquired, or loaned.

The theft, which has never been solved, was at the time evaluated at $500 million. That made it the greatest private theft in American if not world history. Then director, Anne Hawley, opted to keep on view the empty frames.

It was a poignant reminder of numerous visits to the museum. I photographed the collection for my art history collection. It is ironic that those slides would become rare and archival.

The thugs who looted the museum, however, likely flunked art appreciation. Whoever made up the hit list failed to include the greatest Italian renaissance painting in America.

Arguably, Tiziano Vecelli or Tiziano Vecellio ( c. 1488/1490 – 27 August 1576), called Titian, is on the short list of greatest artists of Western Civilization. During a long, prolific, and brilliant career he evolved subject matter, style, and technical experimentation.

The concept that “Oil paint was invented in order to paint flesh” is attributed to him.

It was a part of transition from egg tempera on wood panels to stretched canvas sealed with gesso and priming. There is some give to the support which encouraged more subtle nuances of brushstrokes. Initially, oil painting was used to give a more modulated surface to the hyperealism of Flemish artists who underpainted with tempera.

The Venetian school, know for brilliance of color and light, experimented with the technique of layers of glaze. With Titian, at midcareer, that meant first applying bright, high chroma color and then muting and softening creating illusions of transparency through glazes.

There were many variations and secret recipes for making glaze media. The basic formula combines turpentine, linseed oil, stand oil (thickened linseed), pine resin or dammar varnish. This is combined with transparent pigments. It doesn’t work with thick earth and mineral tones. Dye in a colloid medium, like alizarin crimson, is perfect for glazing. The paint lacks density and cannot be used as an impasto.

When applying glazes the surface requires time to dry. It is the opposite of an allaprima or direct technique such as that of the Dutch painter, Frans Hals. Masters of glaze, like Titian and later Rembrandt, took years to finish a piece. It was usual to have a number of works in process in the studio. During the salons, on “varnishing day,” when works were hung, at the last minute artists applied the final glossy coat. Often this has the visual impact of bringing together or unifying the surface.

Varnish is the norm for finishing paintings but less so in the modern era. While it protects the surface varnish, with time, becomes opaque. In the past the paintings were refreshed with more and more intervals of varnishing. Eventually, uncleaned works become dark and dreary. There is the unpleasant experience of touring the gloomy baroque through 19th century galleries of museums.

Until recent decades, however, overzealous, unscientific cleaning ruined masterpieces. Only the best conservators and restorers respect the delicate balance between removing grimy old varnish but not delicate layers of glaze which it resembles.

The best approach is caution. Using swabs and solvent there are tests for the presence of pigment. There was controversy, for example, when Michelangelo’s Sistine Ceiling was cleaned. While centuries of smoke and grime were removed some argue that his a secco “edits” were removed. The ceiling is now bright and fresh but experts debate whether that replicates or destroys the intention of the artist.

In 2003 we viewed an enormous Titian exhibition at the National Gallery of London. The artist created several versions of some of his best works. Seeing them side- by-side, drawn from numerous collections, was depressing. Many works were too bright, garish in color, and scrubbed of glazes by overzealous conservators.

Until now, one of the most compelling assets of the Gardner Museum masterpiece has been benign neglect. While dulled by age, in the dim light that Mrs. Jack mandated, the venerable, iconic work, with glazes intact, shimmered magnificently in the dark.

It has always been an exhilarating thrill to enter the Titian Room with its “Rape of Europa” 1560-1562. Now that is about to change.

The master, who died at 88, was in his 70s when he created the 178 by 205 centimeters (70 in × 81 in) oil painting on canvas. It depicts the abduction of Europa by Zeus (Jupiter to the Romans) as told by Ovid. Disguised as a bull the god has approached Europa and her maidens at the edge of the sea. In a friendly manner they have played with him. Once mounted on its back the bull heads for Crete. The pose and body language of Europa is chaotic. The attire of a princess is generic like a plain slip or nightgown. The bull has a benign bovine expression. The hovering cupids have awkward poses like the akimbo Europa. Titian lavished spectacular attention to the gills of a fish ridden by a cupid.

Home at Crete with his prize the bull morphed into human form. Their shotgun marriage produces three demi-gods. The inventive, eccentric composition conflates comedy/ farce and tragedy. The power of the masterpiece is that it evokes a range of visual and emotional responses.

The painting was among a number that Titian created for his greatest patron, Spain’s Holy Roman Emperor, Charles V, and in this case, his heir, Philip II. It is notable that in staunchly Catholic conservative Spain royal taste was for erotica. The paintings were hung away from public view in the bedroom of the Escorial.

The Gardner work has an interesting provenance and is among many purchased through art/historian and dealer Bernard Berenson. The attribution to Titian has held up while a number of works in the collection have not. When Berenson was an agent for Mrs. Jack there was lively competition among the Robber Barons for Old Masters.

Many famous works have been downgraded like the Frick’s once renowned “Polish Rider.” During a Rembrandt seminar in graduate school we debated that there was something wrong with the horse. Once confirmed as "school of" with hindsight a painting never looks the same.

There is no question, however, of the authenticity and preeminence of the Gardner’s Titian. Thank heavens that the hoodlums were so stupid.

The painting was one of the "poesie" painted for Philip II. With Diana and Callisto and Diana and Actaeon, both now shared by London and Edinburgh, it was one of three Titian poesies given by Philip V of Spain to the French ambassador, the Duke of Gramont. He in turn presented them to Philippe II, Duke of Orléans, Regent of France from 1715–1723. For most of the 18th and 19th centuries it was in the Orleans Collection in Paris.

It was purchased at auction by Bernard Berenson. Knowing that he was buying for her other bidders, including museums, politely deferred. The  book "The Art of the Scandal: The Life and Times of Isabella Stewart Gardner" by Douglass Shand-Tucci, while gossipy in tone, makes the case for why she built her own palace and later museum rather than leave her collection to the Museum of Fine Arts.

When she returned from a honeymoon and grand tour she was dressed in the latest Parisian fashions. The women of Boston scoffed that they “had their hats.” When her famous pearls were scattered on the steps of the BSO, legend has it, that the men of Boston scurried about to scoop them up. Their wives were not amused by this gallantry. While shunned and snubbed ultimately the New York heiress had the last word and to some extent still does.

Now gently nudged and challenged. With taste and tact the museum has created an annex for special exhibitions, administration and conservation.

The Titian is being cleaned by the Gardner’s Gianfranco Pocobene. It will briefly return to view in its usual place in February. Then it will leave for one to two years joining an exhibition of global masterpieces. Its destination and itinerary will be disclosed at a later date. While away the Titian Room will be renovated including its lighting.

In the high stakes, quid pro quo world of major museums you have to give in order to get. By making this rare and unprecedented loan the Gardner will get to host a reciprocal exhibition of masterpieces.

Until now, the furthest “Europa” has traveled, since it was hung in 1901, has been across the street. In 1929 it was at the MFA’s conservation lab but there are no documents of any treatment. It was “dusted” in 1997. It does not appear that the canvas has been relined. This is common as the support ages and deteriorates. It can result in negative changes to the surface.

Paintings must be certified as fit to travel before they are loaned to special exhibitions.

The assumption is that “Europa” will soon have its passport stamped. Let’s hope that this sublime work returns home in pristine condition.