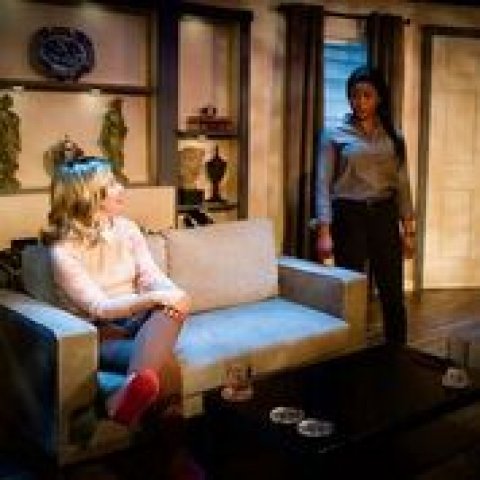 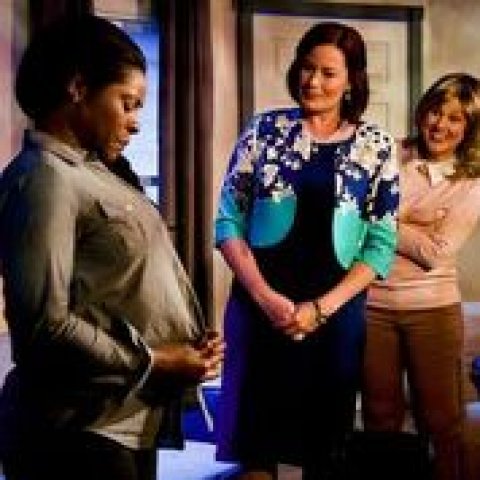 Do you feel that no one is watching or listening to you when you’re eating lunch with a friend and chatting with her?

Or how about when you’re talking on your cellphone?

Do you feel that no camera or other recording device is trained on you when you’re in a bathroom?

If you answered “yes’ to any of the above, then Victor L. Cahn’s part-cautionary, part-suspenseful “caper for three women,” Villainous Company,will surely unnerve you.

Villainous Company, parts of which might bring to mind George Orwell’s 1984, is receiving a riveting, superbly acted production by the professional theater company, Primal Forces. The production runs through Jan. 12 in the four-row Sol Theater. In fact, the experience is so intimate that you feel as though you’re in the same room with the characters.

Unlike Orwell’s masterpiece, no “Big Brother,” male authority figure, or domineering man is part of this play. Rather, in keeping with Primal Forces practice of offering strong, challenging roles to first-rate female performers, the powerful characters in Villainous Company are three females.

And the power dynamics shift just about as frequently as a new plot twist or revelation pops up, keeping us fully attentive.

Speaking of attention, it is necessary to keep your focus fully on the stage for all of the play’s 80 or so minutes with no intermission. Otherwise, Cahn’s use of misdirection, introduction of off-stage characters and their relationship to those onstage might leave you feeling lost.

Without giving away too much, here’s what you should know: Claire, a well-off woman who frequents a high-end furnishings store, arrives home from shopping one day. When she arrives home, she discovers an item is missing from her bags. Soon, a store employee arrives with that very item. But is she merely a worker at Pyramid Furnishings, or some low-level, secret law-enforcement officer who works for Pyramid? Does she conduct covert operations for multiple stores? Or the government? Is she a good “cop” or bad “cop?”

In any case, the mysterious woman, named Tracy, claims to know much more about Claire and her friend, Joanna, then the two can feel comfortable about. Soon, Claire’s elegant, highly-furnished suburban home, which resembles a museum with pricey antiques, essentially becomes a courtroom.

The “defendants” are Claire and Joanna. Meanwhile, Tracy acts like a district attorney.

But none of the characters are precisely whom they appear to be. Moreover, throughout the play, we’re left guessing just who is playing a con game on whom. Larceny and trickery abound in this fast-paced mystery-thriller-cautionary tale.

Parts of the play are less than plausible. For instance, Claire allows Tracy to remain in her home longer than you’d expect. After all, Tracy has no warrant to search Claire’s home. Also, it’s hard to believe that Tracy would be willing to take off her clothes in response to Claire’s request that she search Tracy for wires on her body.

With all that said, director Genie Croft covers for the implausibility of Tracy stripping. When she does take off her clothes, it's in a seductive manner. That leaves us wondering – could Tracy be sexually attracted to Claire?

In addition, under Croft’s deft direction, the action begins slowly and casually as Tracy and Claire chat in a laid-back manner. Both seem like charming, convivial women with whom you wouldn’t mind meeting for coffee. With this laid-back aura, Croft is obviously preparing us for the tension that will soon pervade Claire’s home, designed with elegance and flair by Dustin Hamilton.

Indeed, that tension is palpable, thanks to Croft and three outstanding award-nominated and/or winning South Florida actresses.

No question, Rita Cole as Tracy, Elizabeth Price as Claire and Anna Lise Jensen as a commanding, authoritative Joanna, fully inhabit their characters with impressive nuance and naturalism.

As you watch Cole become Tracy, you feel as though you’re witnessing a shrewd, seasoned prosecutor.

Specifically, an insinuating, sarcastic tone drips from her voice, which also assumes a wry, amusing tone.

She struts about the home with confidence, sometimes shooting accusatory glances at the “defendants.” Her facial expression turns deadly serious and her strong, firm voice assumes a low-pitched, grave, no-nonsense tone.

Cole, as Tracy, folds her arms, places her hands on her hips or in her pockets. These are all confident poses that suggest this woman is in complete control.

Contrastingly, Price’s Claire clearly looks and sounds worried during the interrogation. Her fingers become fidgety while she grasps part of a chair. Also, her eyebrows rise and eyes widen in obvious concern. The free-spirited charm that Claire conveyed in the beginning is gone at this time. Many times, the power shifts. To mark these transitions, the performers switch from sitting to standing and visa versa.

Often, the characters engage in rapid fire exchanges. As a result, you might find your eyes darting as though you’re watching a hotly-contested ping pong match.

Villainous Company is a taut, thrilling piece with snappy dialogue, sexual tension, ironic humor as well as plot twist and turns. The play keeps you in suspense until the end.

Also, it’s a nice change of pace to witness power struggles in which the dominant figure isn’t a male cop or a domineering boyfriend or husband.