Management Dust Up for Shakespeare & Company 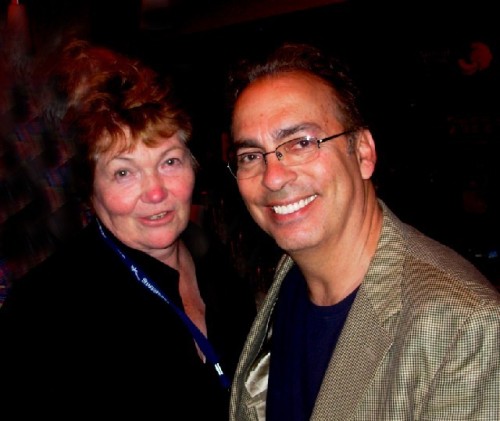 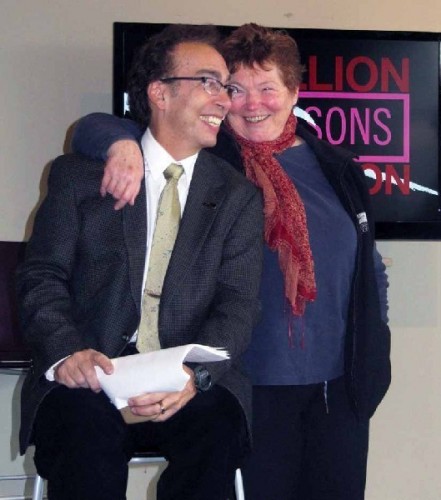 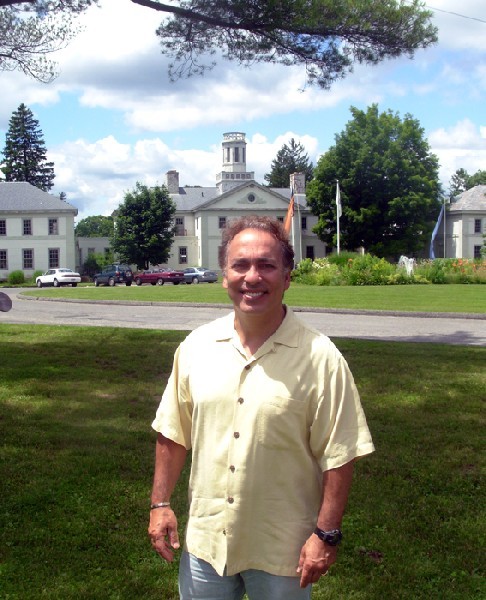 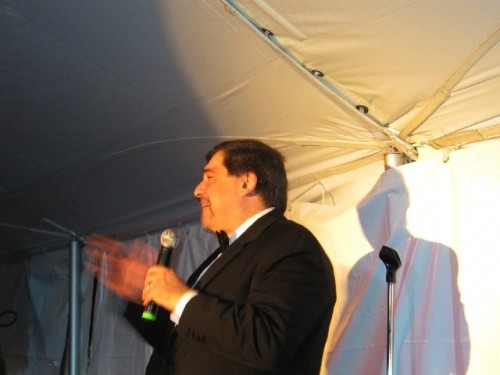 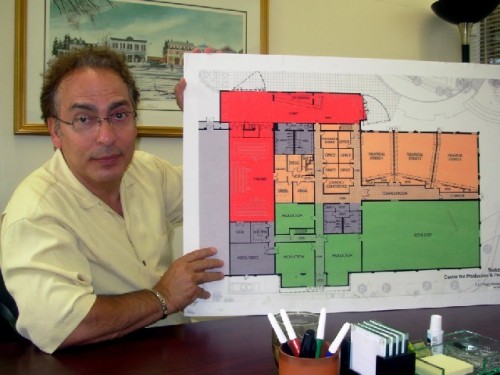 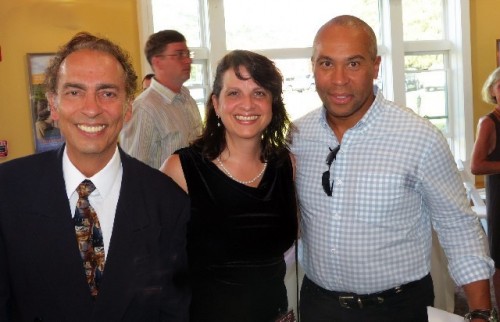 With Governor Deval Patrick who is a Berkshire neighbor and friend. 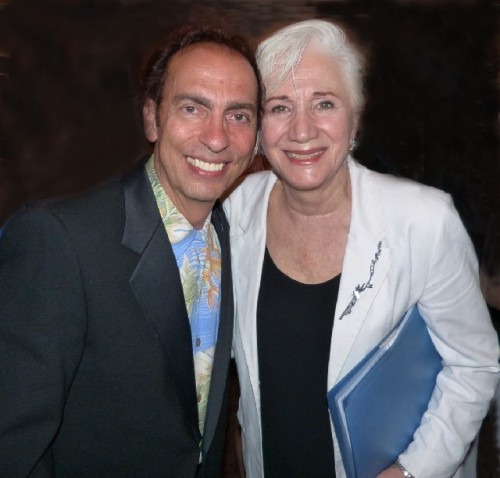 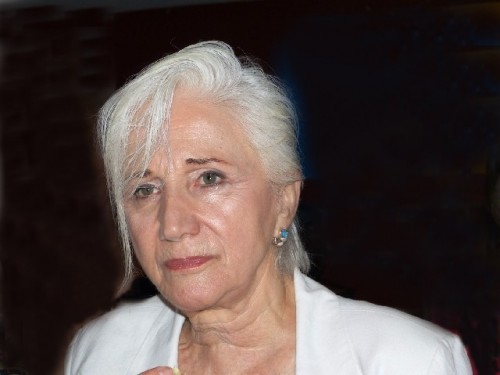 Because of illness Dukakis missed a number of performances as Mother Courage. 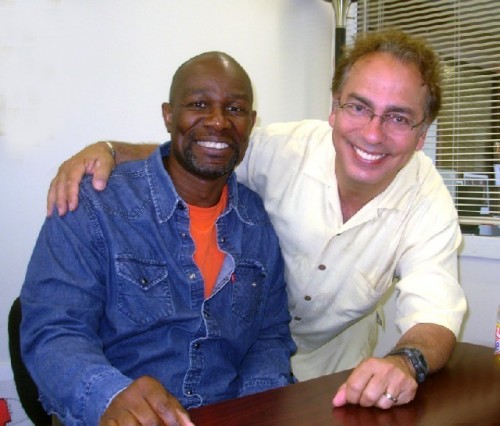 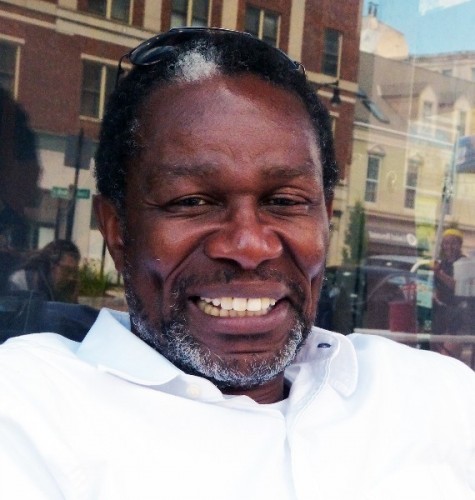 Thompson is about to star in Satchmo at the Waldorf Off Broadway in a S&Co co-production with Long Wharf.

In 2009 when Tony Simotes took over from founding artistic director, Tina Packer, it was discovered that massive debt risked extinction of the Shakespeare & Company. Packer launched the company at The Mount in 1979 and moved it to its current Kemble Street campus in 2001.

With the help of the Board of Directors and Managing Director Nicholas J. Puma, Jr. the company under Simotes was able to restructure its loans and raise money to pull back from the brink of potential extinction. In 2009 that was about $10 million.

While stretched to the limit with management and artistic responsibilities Simotes, over the past few seasons, has also successfully battled with cancer of the throat.

In a surprise move the company has announced a restructuring of management responsibilities. A new position of Executive Director had been created effective immediately. Currently that individual is board member Jerry Bilik who is on the committee undergoing a national search for his replacement.

In addition to its plays S&Co also runs a multi-level educational program. It has been striving to be more of a year round operation with Holiday and mid-winter productions. There are also numerous decaying buildings on the expansive Lenox campus including the landmark Stanford White designed complex opposite its entrance.

The first task has been to stabilize the company and then to address long term renovation and expansion. That would entail eventually having everyone on campus instead of using rental properties and vehicles.

In the artistic community S&Co. is known for its multi-tasking. All of the full time staff has multiple responsibilities. With significant staff cutbacks the greatest burden fell on the shoulders of Simotes and Puma.

While they now will report to Bilik rather than the 40-man board, long term, the official line is that it will allow them to focus on what they do best.

One thinks of the change that occurred several years ago at Williamstown Theatre Festival when it hired not another director but the skilled producer Jenny Gersten. That shift produced wonders for WTF. That model prevails with another producer Mandy Greenfield who will take over from Gersten, who is assembling the current season, in September, 2014.

The separation of artistic and management responsibilities is a norm among major arts organizations. It is a luxury that smaller companies generally cannot afford.

While the widely respected and liked Simotes managed to keep a lot of balls in the air there are unforeseen setbacks. Last summer he cast his friend and colleague, the 80 something Olympia Dukakis, to star in Brecht’s Mother Courage and Her Children.

The previous season she appeared in The Tempest. S&Co star, John Douglas Thompson, out of enormous respect for Dukakis took on the supporting role of The Cook.

Thompson is about to open Off Broadway in the Terry Teachout, one man show, Satchmo at the Waldorf. The play, which premiered in Lenox, is a co-production with Long Wharf Theatre in New Haven. Compared to WTF and Barrington Stage in Pittsfield the company has been out of the loop in bringing productions to New York.  Satchmo will earn revenue for the company and, depending on reviews, wider recognition in the theatre community.

The illness of Dukakis caused the cancellation of four performances. The show finished its scheduled run with four more performances by an understudy. This proved to be an artistic and financial setback for what was projected as a successful season.

It is well known that ticket sales are but a part of covering costs but it really hurts when a much anticipated show falls short of projections. Just ask Mark Volpe who had to scramble for replacements when James Levine was repeatedly absent or when his replacement Andris Nelsons cancelled last summer because of a freak accident.

Board Chairman Sarah Hancock told The Berkshire Eagle that "for the past two years, we have been in the midst of doing a strategic planning exercise." She described the study as the result of "the bit of a crisis we had in 2008 and 2009, along with many other organizations. We're very pleased that we weathered that storm with the help of Nick and Tony."

The organization "had become too lean, all the fat was trimmed…Nick and Tony, along with everyone else in the company, had to do more with less…That's what you do when you're in a crisis, but when you come out, you take a look at what you need. Nick and Tony were stretched way too thin, doing way too much" she said.

The contract for Simotes runs through 2015. Between now and then hopefully the success of the newly initiated triumvirate will induce him to negotiate a new contract.

Shakespeare & Company’s Board Chair Sarah Hancock is pleased to announce the appointment of Interim Executive Director Jerry Bilik, who joins the Company’s management team lending his expertise and experience in the field to support the efforts of Artistic Director Tony Simotes, Managing Director Nicholas J. Puma, Jr., the Company, staff and artists, as well as the Board of Directors.

A long-time supporter, friend and current Board member of the Company, Bilik has an outstanding and distinguished 40+ year career in performance producing, management and directing. His career includes highly successful positions with several notable corporations such as Ringling Brothers and Barnum and Bailey Circus and Feld Entertainment, where he was instrumental in the development and production of Disney on Ice.

“We are thrilled to have Jerry on-board with Shakespeare & Company,” says Ms. Hancock.  “He comes to us with years of professional management experience and will act as the primary interface with the board, work with the leadership team of the Company and help drive development efforts.”

We are grateful to both Nick and Tony for their tireless efforts over the past four years to bring the organization to a more financially sound footing. Having an Interim Executive Director in place will provide a welcome shift for Tony so he can focus more on the artistic affairs of the company, allowing his creativity to flourish without the burdens of day-to-day operations. Nick will now also be able to focus on the areas where his skills will be of greatest benefit to the Company.  These changes will allow the Company to truly blossom and achieve our financial and artistic goals. It’s a busy and exciting time for the Company and while Jerry is here on an interim basis we are pleased to able to get the search underway for a full time Executive Director.”

The Board of Directors has hired Greg Kandel of Management Consultants for the Arts to assist the Company with its Executive Director search. The Company anticipates that the search will be completed in the next several months.

“As we continue to develop and deepen our programming, I am extremely pleased to have Jerry join us and to have his expertise and support in realizing the vision of the Company in the months to come,” says Artistic Director Tony Simotes.  “Jerry has proven over his long career that he is not only up to the challenges, but that he can help shape successful growth strategies in complex environments. It is a massive undertaking and I am delighted to see his expertise, commitment and passion added to our leadership team so that we can continue to strengthen our service to our patrons and reinforce the Company’s high standard of theatrical performance, actor training and education. We have a terrific season planned for 2014 and I look forward to making our announcement in the New Year. Onwards and upwards!”

“We continue to have ambitious goals for the future of Shakespeare & Company,” says Puma.  “I am very excited to have Jerry on board to help us achieve those goals and with our outstanding programs and performances we are on-target to continue the momentum and positive financial trends of the last several years.”

Born in New Rochelle, New York, Bilik developed his passion for theatre and music at an early age when he attended the National Music Camp at Interlochen, Michigan, and has had a long career in the arts, having written, directed, and performed in numerous stage plays and musicals, composed and/or arranged more than 1,000 musical compositions.  He served on the faculty at University of Michigan, and, moving to Los Angeles, scored background music for several films and TV series as well as working as Music Coordinator for the major awards shows (Oscars, Grammies, etc.). Officially retired since 2012, Bilik continues to work on several projects, including two plays, a string quartet (just completed), and a symphony. He resides in Lenox, MA and in Sarasota, FL.

“I am greatly honored to move into the role of Interim Executive Director at this exciting time in Shakespeare & Company’s history,” says Bilik. “When I first came to Shakespeare & Company, I was impressed not only by the work, but also by the vision of the Company and its future. Shakespeare & Company is poised for continued success with its already established and respected education, training and performance programs, and I offer my support and service to help reinforce Lenox as a premier American cultural destination for classical theatre, arts and culture. I look forward to helping Shakespeare & Company build a strong financial base so that this extraordinary programming will endure well into the future.”