Once Upon A Mattress an Off Broadway Gem 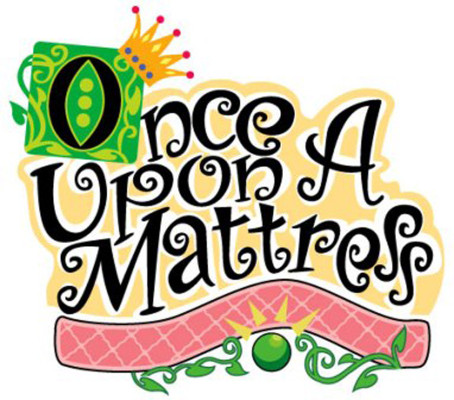 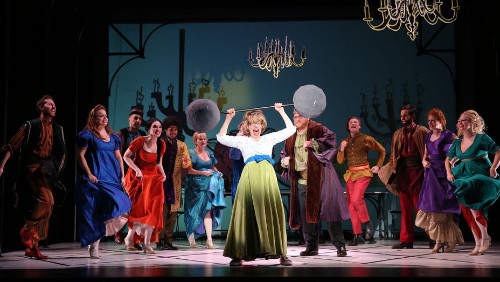 Jackie Hoffman and cast in 'Once Upon a Mattress' Courtesy of Carol Rosegg.

For anybody hell-bent in ringing in the New Year in the most joyous way, I suggest that you hop over to the Abrons Arts Center in lower Manhattan where the always hilarious and over-the-top comedic Jackie Hoffman, as Princess Winifred and gender bender performance artist John “Lypsinka” Epperson, as the long-nailed Queen Aggravian – channeling shades of Joan Crawford and Gloria Swanson with a wee bit of his own lip-sinking thrown in – are camping it up to a fare thee well in the musical Once Upon A Mattress. If you don’t find yourself dancing out of the theater at play’s end with a smile on your face as large as the moon, I suggest that you check into rehab immediately.

Once Upon A Mattress, based on Hans Christian Anderson’s 1835 children’s tale The Princess and the Pea, starring 26 year old Carole Burnett as the princess, had its Broadway beginnings in 1959. It was a career launching event for Burnett. It did the same for Sarah Jessica Parker, who at age 30, when it was revived on Broadway in 1996. While the 46 year old Hoffman, recently seen on Broadway in On The Town, is longer in the tooth than all of her predecessors, her level of energy – devastatingly high-octane – belies her age. More to the point, what’s wrong with being a middle-aged princess? Other zany beloveds who successfully tackled the role of Winifred were Imogene Coca, Dody Goodman, Tracy Ulmann, Lea DeLaria, and Jane Connell, the latter in London.

The story is set in a mythical 15th century kingdom where a search is on for a suitable princess for Prince Dauntless (Jason Sweet Tooth Williams) the nerdy son of Queen Aggravian. It seems that the all-controlling Queen has decreed that no one in the kingdom can marry until her son does. To make matter worse, any princess vying for the role of wife – so far 12 have tried and failed – has to pass a virtually unpassable test devised by the Queen. One by one, each rejected candidate, in payment for her failed effort, is sent home with a proverbial vaudevillian rubber chicken. Yes, the musical is peppered, delightfully so, with a great many visual gags

While all sorts of castle intrigue is going on, urgently waiting in the wings to get married before their baby is to be born and avoid scandal, is Lady Larkin (Jessica Fontana) and her husband to be Sir Harry (Zak Resnick). Both with beautiful voices, sing In A Little While, a wistful song filled with longing for their future together. Nicely rounding out the cast – not counting the Knights and Ladies of the court – is the forever skirt-chasing King Sextimus (David Greenspan), a mute who communicates solely by games of Charades. In his one big number, Man to Man Talk, with fingers, flying wildy here and there, he explains to his dolt of son how babies are made.

Of lesser royalty is a conniving wizard in the pocket of the Queen (Jay Rogers), a lute playing Minstrel (Hunter Ryan Herdlicka) who functions as the play’s narrator, and his sidekick court jester (Cory Lingner) whose totally unexpected dance solo, a beautiful melding of modern, classical, and jazz dance, brings down the house. It is the Minstrel who opens the play by singing Many Moons Ago, a song that tells the story of the play we are about to see.

The play seriously catches fire when a bedraggled Winifred, who is to be presented by Sir Harry as a possible wife for the Prince, arrives at the castle after just having swum the moat. Everybody is awed by such deering-do. So is the audience as Hoffman, with a set of pipes that can shatter glass, sings the song Shy, an attribute that neither the character nor the actress show any sign of. However, the Queen is not impressed. But Fred, as Winifred likes to be called, captures Prince’s heart and in doing so he forces the Queen to let her take the test—the catch being if a single pea, maliciously placed under 20 stacked downy mattress at the Queen’s orders, keeps her awake all night it will prove that Fred is a real princess and sensitive enough to marry Prince Dauntless.

For a small play, on a small stage, in a relatively small theatre of 335 seats, with a ticket price one third that of Broadway, and 20 actors singing and dancing their hearts out, all backed by 14 piece orchestra, a rarity both On and Off Broadway, Once Upon A Matress, is the best bang for your buck in the city. The simple sets and colorful costumes are nicely tailored to the play. There is even a bit of inventiveness in which a drawing hand, projected on a screen, is seen adding further details to the set. Sometimes this works, at other times it is a bit distracting. This small carp aside, Once Upon A Mattress, wonderfully directed by 5-time Drama Desk nominee Jack Cummings III, and musically staged and choreographed with much humor by Scott Rink is a beautifully wrapped gift, one just perfect for the Holidays.