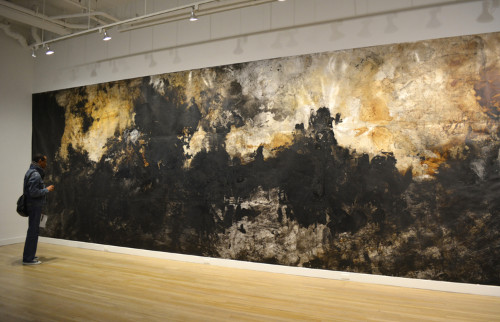 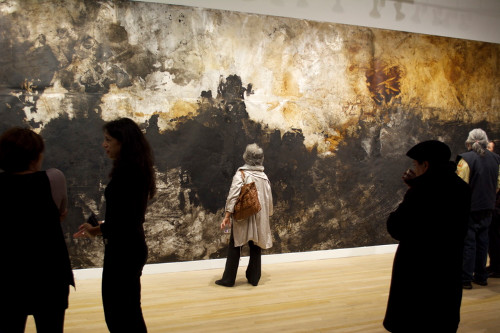 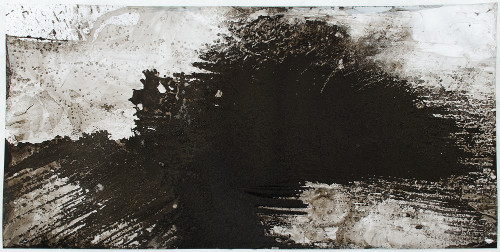 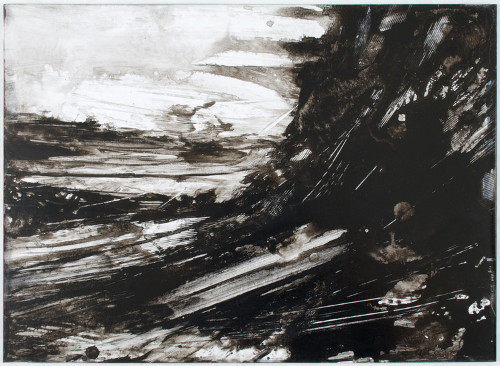 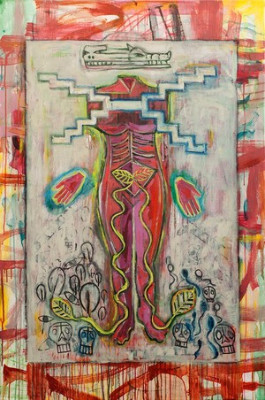 Work by the curator Jaune Quick to See Smith is on view in the project space.

CUE  Art Foundation presents a solo exhibition of new work by Athena LaTocha, which has been curated by Jaune Quick-to-See Smith. The show features a large-scale immersive installation of an ink-wash drawing by LaTocha that spans the entire length of the gallery. While the work depicts a landscape, its more abstract elements leave the viewer to decipher what they see.

The Project Space features a small selection of new paintings by Curator-Mentor, Jaune Quick-to-See Smith, in celebration and in recognition of LaTocha and Smith's relationship.

ARTIST STATEMENT
By reducing the palette, I center the imagery on dynamic gesture and atmosphere that recall the powerful forces of nature and the human impact upon the world. My images begin with my memory of Alaska—specifically the irony between vast magnitudes of raw nature and the impact of industrial development upon nature.

I work rigorously between large and small scale. Incessant questioning and doubt play a large role in how I work in a repetitive, serial mode. Working aerially with my images on the floor, I am interested in being inside the image rather than the outside as an easel painter.

I use intuitive processes and chance operations to tear down and rebuild landscape iconographies, turning to unwieldy and unorthodox tools to assist with this approach. Tools such as cracked rocks, concrete bricks, and reclaimed automobile tire shred—which I pick up off the sides of highways—are favored over traditional painting and drawing tools. The steel radial from the tire shred literally cuts and bites through the medium and into the support, while it conceptually cuts into the metaphorical landscapes.

Athena LaTocha, born in Anchorage, Alaska in 1969, lives and works in Brooklyn, New York. She received her BFA from the School of the Art Institute of Chicago; and MFA from Stony Brook University, NY in 2007. After completing her studies, she apprenticed in bronze finishing at the Beacon Fine Art Foundry in Beacon, New York and furthered her work in printmaking at the Art Students League of New York from 2008 to 2013.

In 2013, LaTocha was the recipient of the prestigious Robert Rauschenberg Foundation Residency in Captiva, Florida. She was also awarded a fellowship and residency at the Vermont Studio Center, and is currently artist-in-residence at chashama, Inc. in Brooklyn, New York.

The artist gratefully acknowledges chashama for providing the space to create this exhibition.

In 2010, I walked into the Chelsea Art Museum to view an exhibit, titled IN/SIGHT 2010, of a group of Native American artists. Most of the artists I knew personally, so I was able to identify their work by sight, but Athena’s work was new to me.

It was because of that exhibit that I made it a point to meet Athena. Her work was not easy for me to grasp, since I am a figurative and narrative artist as many Natives are.  I at first felt distance from her work, but later I was drawn to study the work in a meditative way. I think that’s where we met, I mean her work and I.

My personal references cause me to see the work as Turneresque, yet I might place his work more on the side of the sublime in comparison to her work.  His coloration is sweet and soft in comparison to Athena’s gritty and scratchy surfaces.

Her work has high drama, the earthen kind, as in arid places with volcanoes, earthquakes, high winds and spewing ash. They are like the sandstorms in the SW known as Haboobs, an Arabic word for blasting wind. The viewer has a sense of atmospheric gravity, a weather front or downbursts with flying debris.

Athena’s memories of Alaska are mixed with her daily grind and stresses in the city. Her solo exhibition at Stony Brook was titled Sturm and Drang, built around the cultural movement in the late eighteenth century that had a desire for freedom of expression and the primacy of instinct and impulse. This movement stressed inner vision and unconscious drives that possibly fuel Athena’s way of attacking this imaginary landscape.

Spending time with Athena’s work over the past five years, I can honestly say she draws the viewer back again and again. Abstract art can be a closure in the mind or it can be a window, Athena’s work is the latter for me.

Her sense of storm and stress continues to haunt me. I’ve also compared her work to Victor Hugo’s ink paintings.  These have a sense of grandeur, but those of Athena are more physical, especially in scale where you sense the reach of her arm in sweeping gesture.

I question whether her memory accurately displays the Alaskan landscape after the melt or it meets somewhere in the mental scape and becomes an amalgam of a gritty and stressful city life. Either way her work deserves to be seen. In a meditative viewing she may give a visitor a much-needed respite and a sense of exultation, of freedom, even euphoria. At least she does that for me.

Jaune Quick-to-See Smith is one of most acclaimed American Indian artists of today.  Smith has had over 110 solo exhibits and offered more an 225 lectures in the past 40 years and has done printmaking projects nationwide.  Over that same time, she has organized and/or curated over 30 Native exhibitions, lectured at more than 200 universities, museums and conferences internationally, most recently at 5 universities in China. Smith has completed several collaborative public art works such as the floor design in the Great Hall of the new Denver Airport; an in-situ sculpture piece in Yerba Buena Park, San Francisco and a mile-long sidewalk history trail in West Seattle and recently, a new terrazzo floor design at the Denver Airport.

Smith uses humor and satire to examine myths, stereotypes and the paradox of American Indian life in contrast to the consumerism of American society. Her work is philosophically centered by her strong traditional beliefs and political activism. Smith is internationally known as an artist, curator, lecturer, print-maker and professor. She was born at St. Ignatius Mission on her Reservation and is an enrolled Salish member of the Confederated Salish and Kootenai Nation of Montana. She holds 4 honorary doctorates from the Pennsylvania Academy of the Arts, the Minneapolis College of Art and Design, Mass College of Art and the University of New Mexico. Her work is in collections at the Whitney Museum, the Metropolitan Museum, the Brooklyn Museum, Smithsonian American Art Museum, the Walker, the Victoria and Albert Museum, London, the Museum of Modern Art, New York, Museum for World Cultures, Frankfurt, Germany and  Museum for Ethnology, Berlin. Recent awards include a grant from the Joan Mitchell Foundation to archive her work; the 2011 Art Table Artist Award; Moore College Visionary Woman Award for 2011; Induction into the National Academy of Art 2011; Living Artist of Distinction, Georgia O’Keeffe Museum, NM 2012; the Switzer Award 2012; Woodson Foundation, Lifetime Achievement Award, Santa Fe 2014; National Art Education Association, Ziegfeld Lecture Award 2014. In 2015 she received an honorary degree in Native American Studies from Salish Kootanai College, Pablo, MT.

In addition to her role as Curator-Mentor for this exhibition, CUE Art Foundation is proud to honor Smith and her contribution the greater contemporary art world at the 2015 Gala & Benefit Auction.

Special thanks to Accola Griefen.

This exhibition marks the debut of a hybrid artist selection process featuring solo exhibitions curated by established artists, alongside a series of solo and group exhibitions selected by an annual Open Call. In line with CUE’s commitment to providing substantive professional development opportunities, curators and panelists also serve as mentors to the exhibiting artists, providing support throughout the process of developing the exhibition. CUE’s exhibition program aims to present new and exceptionally strong work by under-recognized and emerging artists based in the United States, and is committed to exhibiting work of all media, genres, and styles from artists of all ages.