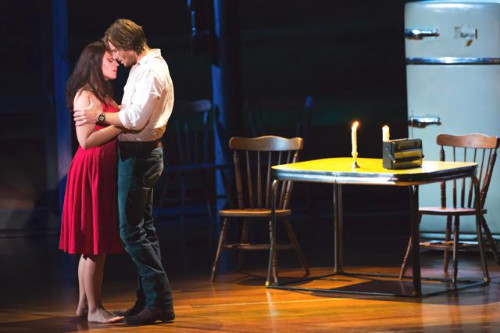 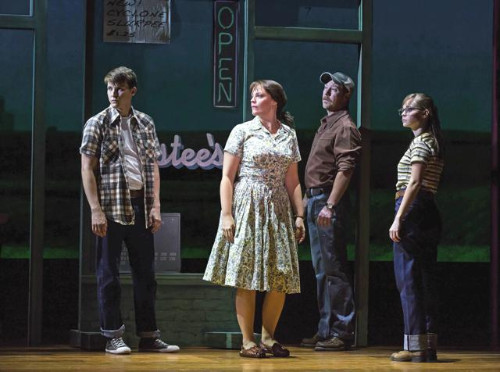 L-R: With Robert (Andrew Samonsky) unseen in the distance, the moment of truth is at hand for Francesca and she has to choose between her son Michael (Dave Thomas Brown,) her husband Bud (Cullen R. Titmas,) and daughter Carolyn (Caitlin Houlahan) or a new life with her true soulmate. Photos: Matthew Murphy 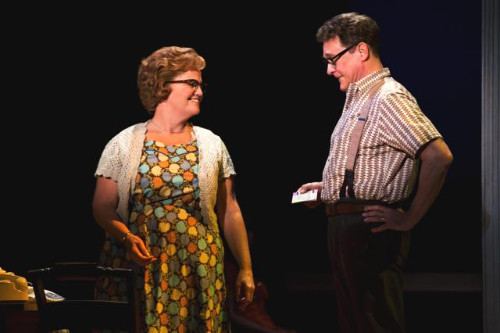 Marge (Mary Callanan) wants to know if her husband Charlie (David Hess) would forgive her if she cheated on him Photos: Matthew Murphy

On opening night, December 10th, celebrities and actors sprinkled throughout the audience were easy to spot in Center Theatre Group’s largest venue the 2000-seat Ahmanson Theatre. They were there along with an eager audience waiting to see an honest-to-goodness tear-jerker about the choices people the world over make when it comes to love.

The cynics in the audience (mainly males who live in man caves) would probably consider the story as just one more lightweight ‘chick lit ‘love story. Perhaps, there’s some truth in that point of view, but remember, the novel ‘The Bridges of Madison County’ now a musical, was penned by Robert James Waller, which some have said of the work, was his ‘roman a clef’. Waller’s conundrums in real life are echoed in the choices his characters make in this new musical.

It’s inevitable that comparisons will be made by theatre audiences to the 1995 movie which starred Clint Eastwood and Meryl Streep. In Waller’s novel, as well as in the movie, the story is told from the point of view of Robert Kincaid a National Geographic photographer on assignment to photograph Iowa’s famous wooden bridges of Madison County.

The story of Francesca, an Italian-American war-bride wife and mother of two children, is set in Winterset Iowa circa 1965, over a four-day period while her family is away at the Illinois State Fairgrounds. Her daughter Carolyn has entered her prize steer in the competition but this year Francesca decides not to go with family to the fair. She is looking forward to four days of rest and relaxation, just taking care of herself for a change.

Robert, as a professional photographer, leads the life of a gypsy traveling from one photo shoot to another, never planting roots or remaining in one place. His work is his passion and it’s all consuming, until one day when he stops at Francesca’s farmhouse asking for directions to the area’s famous wooden-covered Roseman Bridge. Serendipity often plays an important role in the lives of characters in fiction. And, as in real life, it’s always our choices that drive the drama, the excitement, the poignancy, and the romance. Reality usually sets in later.

The creative team responsible for bringing the theatrical musical to life is chock-full of Tony Award winning artists beginning with music composer and lyricist Jason Robert Brown and librettist Marsha Norman, under the direction recreated by Tyne Rafaeli, of the original Broadway direction of Bartlett Sher (who was in the audience on opening night). A pretty formidable artistic team.

The lush musical score and lyrics by Jason Robert Brown lovingly supports the book by Ms. Norman, who cleverly searches the hearts of Francesca and Robert, two people compellingly drawn together by opportunity as each seek answers to the choices they’ve made over the years.

To her credit Ms. Norman’s script focuses more on the vulnerable Francesca and her story; nicely played and beautifully sung by Elizabeth Stanley. Robert, played by Andrew Samonsky, fits the physical look that Waller’s novel painted – a tall, slender, enigmatic stranger who is just passing through, but, whose presence sends out smoldering signals and promises of something more. He may have a similar look to Eastwood, but that’s where the comparison ends. Mr. Samonsky can really sing!

Stanley and Samonsky generate wonderful on-stage chemistry and sizzle when their romantic moments arrive. Ms. Norman’s preference for favoring Francesca’s point-of-view in the story resonates with females in the audience without altering the dramatic intention of the source material by novelist Waller. Who among us doesn’t harbor secrets about past romantic encounters and think ‘what if’..?

Ms. Norman is an unabashed admirer of Thornton Wilder; especially “Our Town”. It comes as no surprise then to find echoes of Wilder’s funeral scene from “Our Town” folded into “Bridges”.   Most of the music is dreamy, romantic, and appealing in a 20th century way; standout songs like “Falling Into You”, “Almost Real” and “It All Fades Away”, help transport the audience to a rural farm in Winterset, Iowa that is awash in 1965 Midwestern values.

Solid support comes from Caitlyn Houlahan as spunky daughter Carolyn Johnson, Dave Thomas Brown as restless son Michael Johnson, Cullen R. Titmas as Francesca’s stalwart husband Bud, Mary Callanan as sympathetic neighbor Marge, David Hess as Marge’s affable husband Charlie, and Katie Klaus, who appears in multiple roles. As entertaining as the production is, the two and half hour show could probably lop off at least 10 minutes by eliminating the back-flash scene where we meet Francesca’s sister back in Naples, Italy. The information could merely be explained to Robert by Francesca at the farmhouse or anywhere in perhaps four or five sentences.

As an added treat for all performances the musical production is conducted by Composer/lyricist Jason Robert Brown. The technical credits for this splendid production are first rate beginning with the original scenic design by Michael Yeargan; costumes designed by Catherine Zuber; lighting design by Donald Holder; and sound design by Jon Weston.

“The Bridges of Madison County” performs at The Ahmanson Theatre through January 17, 2016.