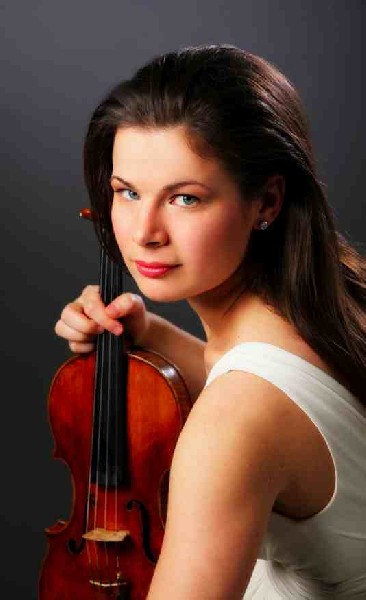 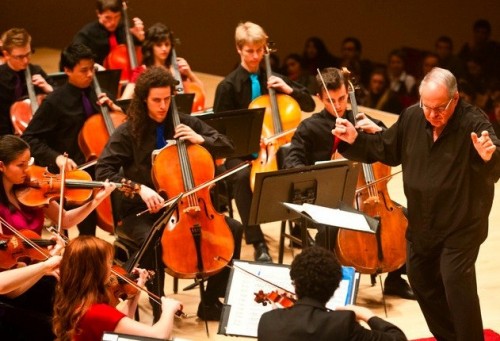 Young musicians from all over the country come to New York for a Christmas holiday seminar created by violinist and conductor Alexander Schneider almost fifty years ago.  This seminar introduces young artists to new musical ideas and also gives them an opportunity to perform on stage at Carnegie Hall.  Competition for spots is fierce, but there are no application fees and all expenses are paid if you are selected for the Orchestra.  One of this year’s performances took place on Christmas Eve at Carnegie Hall.

Jaime Laredo, who Schneider chose to succeed him, conducted and performed.  The first piece was a Bach double violin concerto, in which Laredo performed with Bella Hristova, a recent winner of the Young Concert Artists Award.  They were delightful together, tearing into Bach’s fugal parry with vigor and charm.  The orchestra provided a perfect backup and a meticulous continuum.  Full of passion and spiritual conflict, the violins were ever present in an articulate drama.

The Dvorak and Saint-Saens showed Hristova’s brilliant performance technique to full effect.  The first theme, a lovely descending line, is introduced by the orchestra and then picked up by the violin.  A new melody in the solo violin is pulled back as the orchestra keeps making reference to the original theme.  As the work went forward, full orchestra charged into a marching rhythm, which brought the audience to attention until we could relax in the beautiful, original themes.  The nuanced performance by Hristova was enchanting.

As Hristova dove in to the Saint Saens, she contrasted splashy technical displays with wonderfully lyric themes. She masterfully performs with both power and control.  The stunning articulation of chords played on the strings shows just how special an artist she is.

Mozart’s Symphony No. 35 was a perfect way to conclude the evening and welcome in the holiday. Trumpets and drums are added to the orchestra.  This is party music, with wind instruments and timpani often blasting front and foremost.  The finale was played as Mozart ordered ‘as fast as possible.’  Lovely motifs lingered in the excitement.   This is not music of merely aesthetic beauty.

Music is the lingua franca of the world.  For surely a language it is.  You do not have to understand the questions the composer may have raised as he wrote.  When we look at painting today, it is often difficult to understand without knowledge of those originating questions.  Not so music.

In the Baroque era, clearly a conversation is going on, as for instance, the two violins in the Bach Concerto.  The Romantic and post Romantic period asks the audience to allow the music to wash over them.  Today, we continue the romantic wash, but the dialogue is often introduced too.

The presence of so many fabulously talented young performers on stage at Carnegie is truly heartening.  Now music must become part and parcel of the curriculum in public schools from Pre-K through high school.  Bella Hristova is involved in educational outreach.  Carnegie Hall is at the forefront of this effort.  This concert brilliantly made the case for music’s universal importance as the New Year begins.