Though Around for Long Time, A Strong New Design Trend 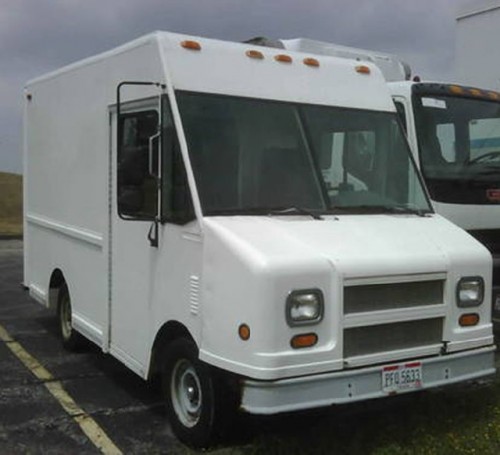 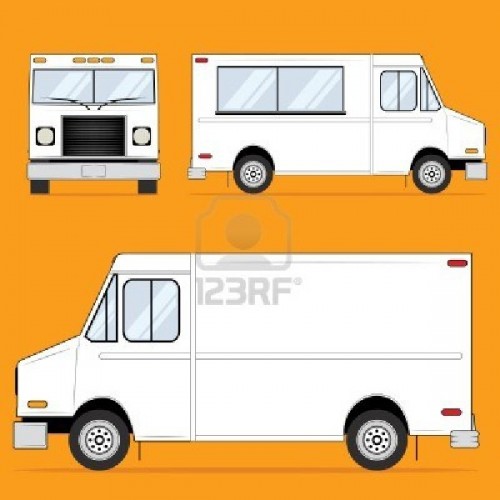 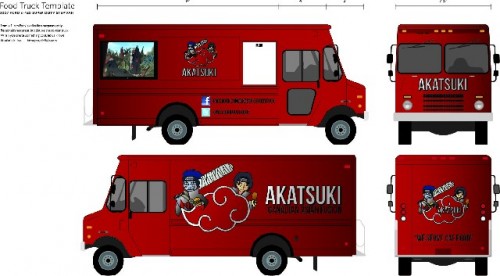 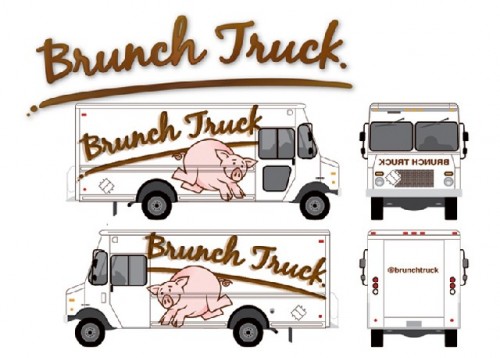 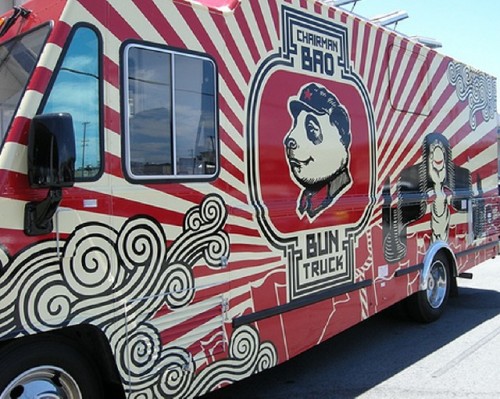 A Very Graphic Truck From California 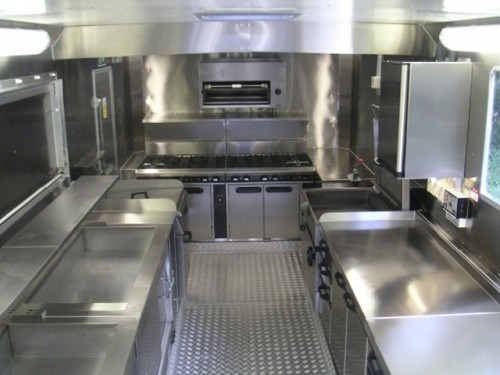 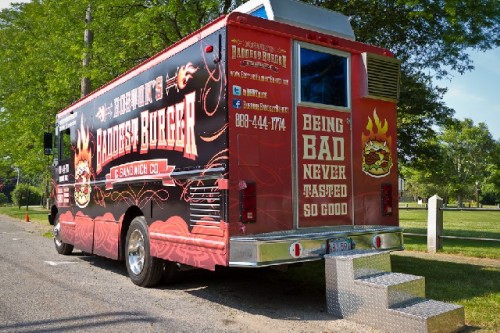 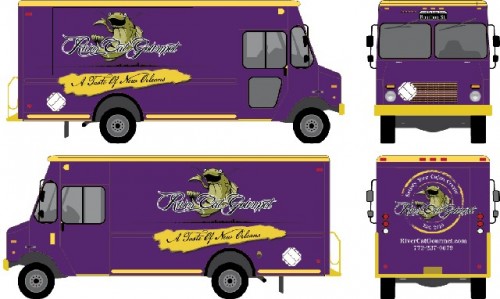 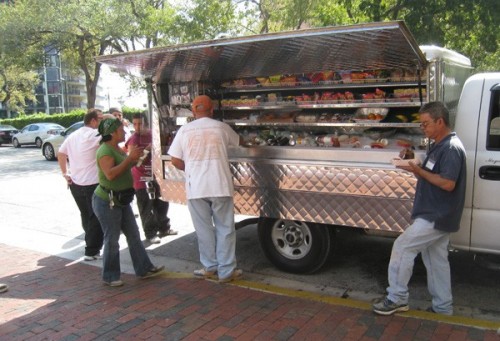 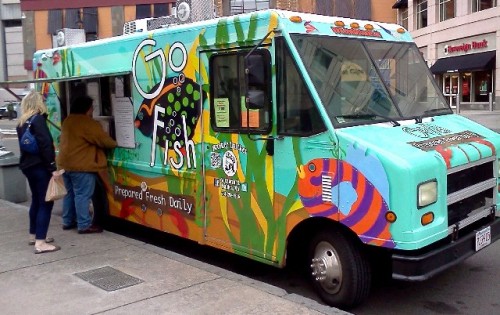 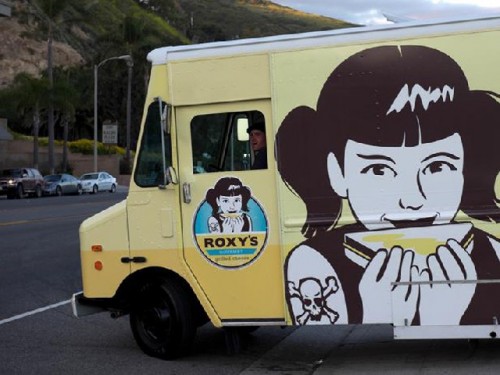 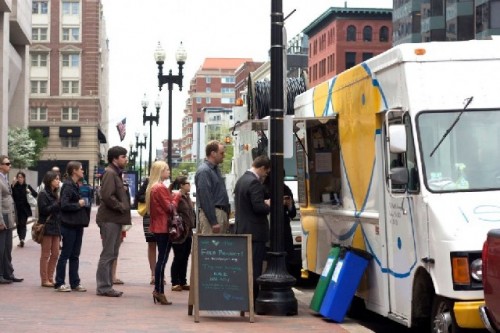 Line at Mei-Mei Outside of Boston’s Public Library

Each year, "the best" designs are written about in terms of beauty, function and notable influence. This year the vast majority of designs have been shoe, clothing, technology, furniture, toys and bicycle refinements. What was has been made a bit better. Nothing really exceptional seems to have had great resonance. However, in an area of basic needs, one thing seems to have made a real impact.

Perhaps the most interesting design trend of 2012 has been the proliferation of Gourmet Food Trucks throughout the United States. Their history has been a reflection of American life for the last 150 years or so.

By the mid-19th Century, on 1000 mile cattle drives, eating hardtack and smoked meat for a month or more was a difficult digestive activity. Baked beans were probably not the only thing that gave cowboys gas. So to make the cattle drovers more content, using old Army wagons, the "chuck wagon" was created to cook up more inventive and better tasting meals.

During the last half of the 1800s, thoughtful entrepeneurers in the growing urban centers of America recognized a need to feed workers before work, at lunchtime and when they left work and lunch wagons were set in place.

These begat mobile food canteens at construction sites and factories. Some of these became known rightly or wrongly as roach coaches. Food trucks, canteens, trailers and carts of various types have been around for decades. Visually neutral vehicles of sustenance dotted along busy streets and plazas have given us hot dogs, sausages, prezels and cinammon buns along with coffee and soda for generations.

One of our best collective childhood memories is the echoed sound of the ice cream truck delivering Popsicles, Nutty Buddies, Creamsicles and Good Humour Bars on hot Summer days. "Can I have a quarter?"  Or was it 50 cents?

But, across the country in the last few years there has been a new emerging form, the Gourmet Food Truck. It brings quality taste, gastronomical adventure and convenience together. Though the price varies, it is generally a tasty, affordable, accessible treat.

Creating a gourmet food truck is a series of several different design applications, incorporating food, graphics and technical elements. These include governmental regulations, permits, public health rules, location choices and scheduling. There are a lot of moving parts to establishing a Gourmet Food Truck.

First comes a great idea about a specific type of food or a particularly special meal. Where to find the right ingredients and place to prep the food, a commissary, has to be ascertained. Then comes the vehicle, the proper type of truck. Usually, they are a Chevy P-30, or P-40, and/or a Ford P-450 type truck. Used ones are OK too.

Integral to the project along the way, a "look" has to be developed including a logo, color scheme, a graphic application to the truck, menu design, etc. But every graphic designer cannot create a strong environmental graphic image, so some Gourmet Food Truck identities are much better than others. More about this later.

And of course there is the issue of financing. The charm or appeal of the Gourmet Food Truck is the relatively low price compared to establishing a permanent reataurant. A Gourmet Food Truck can cost upwards of $100,000 or less while a stand-alone restaurant is around one million to 2 million dollars. These trucks can be considered the prototype for a fleet of trucks or a future permanent restaurant.

Staffing is done simply: By family members, or just one or two outside employees. So waitstaff and chef issues are not as major a concern as for a restaurant. Location is key. Often public sites are done by lottery through municipalities. Private sites are negotiated with property owners or management.

Technically, the stainless steel kitchen area in the truck is a packaged modification. Some have customization depending upon special cooking needs. Trucks can also be customized based on the budget and taste of the owners.

Sustainability (it is 2012) is a concern of many owners as well as communities that the trucks frequent. For a nominal cost (around $2,000/each), diesel food truck engines can be converted to Bio-diesel. It is an alternative fuel produced from renewable plant sources including canola (rapeseed) oil, soybean, corn and palm oil.

This effects global warming. Since Bio-diesel is renewable and produced from processed green plant oils, it does not add new amounts of the green house gas carbon dioxide (CO2) into the carbon cycle when burned in diesel engines. This makes Bio-diesel combustion carbon neutral. So the old lunch wagon's descendents can be really green.

As far as design, gourmet food trucks represent a wonderful environmental graphic design opportunity. Unfortunately, environmental graphic design is not just blowing up print or even web graphics larger and applying them to a large object or space, in this case the food truck exterior. Many food truck exterior designs are at best neutral, and sometimes, rather mediocre. This is being polite. Some are just awful.

Appropriate environmental graphic design is the arrangement and placement of image, words and sometimes pattern in relationship to form and space, both negative, as well as positive. The limited food truck canvas allows for creativity which is not always shown. But this can be improved upon.

The gourmet food trucks that look the best are those that project their brand and identity simply and boldly. One very good example is Boston's Roxy's Gourmet Grilled Cheese Truck. Roxy is well placed as are examples of their sandwiches. This restaurant/fastfood graphics that in motion, or at rest, tells the vendor's story and underscores the message.

Another optional design element is a canopy. Food truck owners have neglected this area as a potentially prominent focal element. Here there is great room for creativity as well. Canopies can be in fabric or metal and can frame the serving window as well as assist in graphically telling the product brand's story.

This leads to what the story is about. It is all about the special product, the unusual, or unique gourmet food. This is the essence of the individual gourmet food truck business. Interesting and unique ethnic, fusion, or specialty products do the best. A gourmet food truck's business needs this unique product to succeed.

In Southern California, there has been a great deal of experimentation to create hybrid foods mixing Latin specialties with Asian spices and flavors. One such company is Dos Chinos which incorporates Latino-Asian fusion best in their burritos. Their curries, coconut sauces, and Sriracha-esque touches get soaked up wonderfully by the rice and meat inside the burrito. The tortilla is a nearly perfect vessel to hold everything in. It is a dish that foodies, office drones, and chinitos all seem to love.

In Boston, Go Fish sells specialty seafood items as well as old New England Classics like Clam Chowdah and Lobster Rolls. Mei-Mei Street Kitchen serves creative Chinese-American cuisine made from locally sourced, sustainable ingredients. They pride themselves on serving humanely raised meat and produce from small farms. This allows them to offer some of the most creatively delicious, fresh, street food available.

In New York City, there are a plethora of gourmet food trucks that appeal to almost everyone's taste. Among the best are Coolhaus, an LA import, that translates an ice cream sandwich into an artisanal marvel between homemade cookie halves. Taim Mobile is a vegetarian, Israeli, falafel vendor. It serves arguably the best falafel in the city. It can be offered with saffron aïoli fries, one of their fresh salads, or a smoothie.

Interest in gourmet food trucks is exploding. Cities, towns and park systems along with private developers and institutions all want them to add tasty vitality and spice to their locations. Rules of participation are being simplified. Lotteries are set for food trucks to get sites and schedule operations.

In the last couple of years, there are now festivals of gourmet food trucks and competitions between cities. The Food Festivals of New England are held throughout the spring and summer for customer tastings. Over 10,000 people attended the last one in early September. The first annual Boston/New York Gourmet Food Truck Competition was held. New York City won barely by a taste bud.

Recently, I attended a New England Food Truck Association meeting where two towns, two cities, a city park, as well as a state park system, each made a serious presentation. They all  wanted gourmet food trucks. One of the park areas was iconic Walden Pond in Concord, Masachusetts once occupied for two years by Henry David Thoreau. I bet that he would have liked an organic, vegetarian, Asian Fusion Burrito.