Soul Music in the Windy City 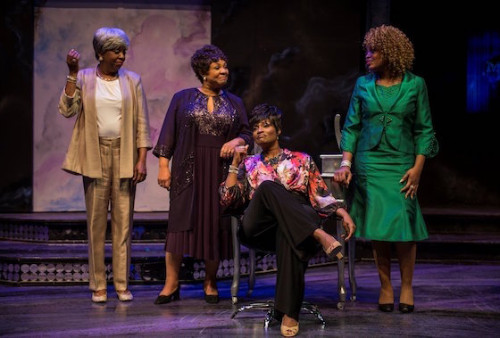 Dynamite Divas, Black Ensemble Theater's contribution to holiday celebrations, is subtitled "A Tribute to Women of Soul." And it's a worthy tribute to those talented and charismatic singers, with performances of songs of the '60s and '70s by Roberta Flack (Melanie McCullough), Nancy Wilson (Rhonda Preston), Gladys Knight (Rashada Dawan) and Aretha Franklin (Shari Addison). The four performers sing powerfully and create realistic personas of their characters. Their songs alone would have earned four stars for the musical aspect of this show.

Unfortunately, that fine music is layered with a silly plotline about a billionaire inventor (Mr. Maurice, smarmily played by Rueben Echoles) and his worldwide telecast of the dynamite divas. Echoles, a multitalented artist, also directed, choreographed and designed costumes and wigs. The production, written and produced by BET's founder, Jackie Taylor, would be better off with less of Mr. Maurice and his story.

The four divas arrive on the pretext of Mr. Maurice paying each a healthy fee to rehearse and appear on the telecast. Over the course of Mr. Maurice's "three stages," they exchange memories of their life journeys, hardships, loves gained and lost. Preston recreates Wilson's silky jazz stylings in "You Don't Know How Glad I Am," McCullough's Flack does a lovely rendition of "Killing Me Softly," and Dawan's Knight brings the audience "Letter Full of Tears." Addison's Franklin, the queen of soul, ends act one with powerful versions of "Freedom" and "Respect."

Dynamite Divas features appearances (via Mr. Maurice's "Assimilator") by soul singers of the past such as Nina Simone (performing "Mississippi Goddam" and "Young, Gifted and Black"), Dinah Washington ("This Bitter Earth"), and film excerpts of sensational older divas. There's even a cameo by a Beyonce impersonator, asking "Why Not Me?"

The singers are backed up by an outstanding seven-member band, directed by musical director, arranger and drummer Robert Reddrick. The band is perched on a platform above the stage.

Originally staged by BET in 2001, the current version of Divas is updated to include some of today's divas and the use of electronic handheld devices by Mr. Maurice and his staff. Echoles has created spectacular evening gowns for all the divas and ensemble members. The sparkling stage set and lighting are designed by Denise Karczewski and enhanced by Aaron Quick's sound and projections design.

Dynamite Divas runs about 2.5 hours with one intermission. It continues at the Black Ensemble Theater, 4450 N. Clark, through Jan.24. Performances are Thursday through Sunday with two shows on Saturday. Buy tickets for $55-65 online or by calling 773-769-4451.