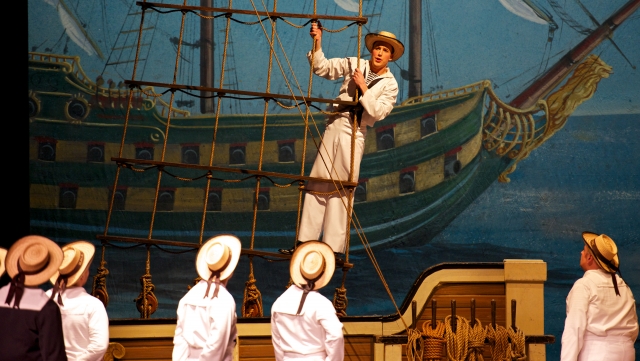 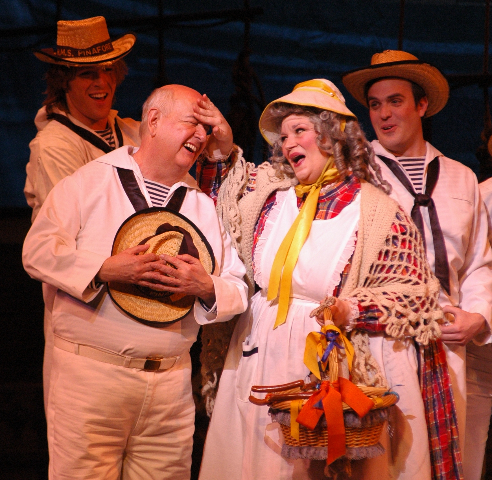 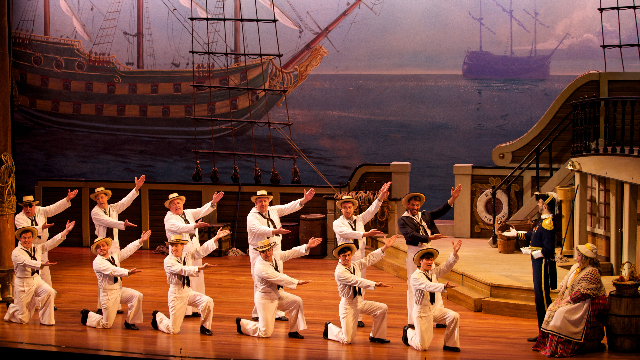 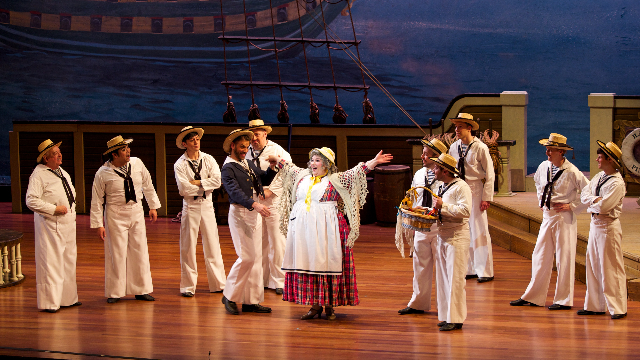 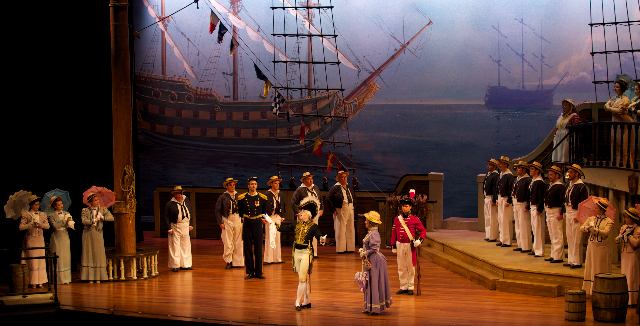 "I am the Monarch of the Sea" 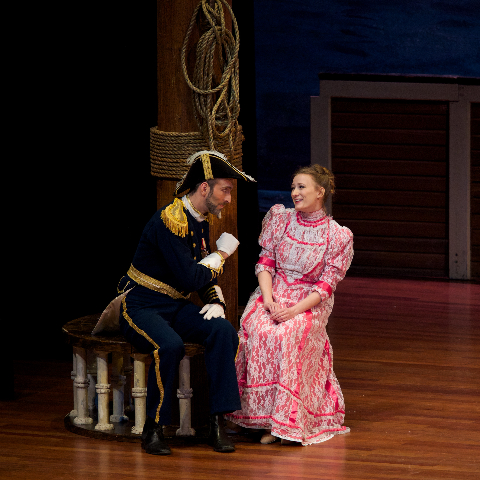 We join the unmistakeable high spirits as Albert Bergeret conducts the introduction to Pinafore presented by the New York Gilbert & Sullivan Players. The HMS Pinafore is docked in the Portsmouth Harbor, awaiting the visit of the 'monarch' of the Royal Navy, Sir Joseph  Porter. His visit is not so much to review his sailors as to seek the hand of Josephine, daughter of the ship's Captain.

The bumboat woman, Little Buttercup,  Angela Christine Smith is not 'Little,' but her huge, warm voice immediately attracts as she distributes sweets and tobacco to the crew.

The problems about to unfold are soon presented by sailor Ralph Rackstraw who is in love with Josephine. Daniel Greenwood catches our ear with his big bright voice,  edged with a bit of metal.

Josephine on an upper deck, perhaps to indicate her superior class, reciprocates Rackstraw's love, but is afraid to reveal it, because her father would consider him unsuitable.  This does not prevent Kate Bass in the role from displaying her lyric soprano with a wide range.  The first singers who undertook the heroine's role insisted on singing from the center of the stage.  Librettist Gilbert told them, "This is not Italian opera. This is low burlesque of the worst possible kind."  Bass has no need to insist on anything.  Her voice shines from whatever deck she's placed on.

The prospective lovers have voices which blend well in duet. Bass' voice has a bright top and an intelligent reading of song and phrase. Greenwood exposes an enticing edge to his touching tenor.

Sir Joseph Porter boards the boat to offer his hand to Josephine.  Board may be the wrong word as Porter tumbles onto the deck. James Miles' exaggerated Raggedy-Andy-movements may be adjusted when the ship sails on the ocean, but anchored in the Portsmouth Harbor he hardly appears seaworthy.  Miles is a stalwart member of this troop and also directs Gilbert & Sullivan in Falmouth, Mass. His credentials allow him to stretch improvisation and witty quips to their appropriate limits.

Like most important men, Porter travels with an entourage.  His sisters, cousins and aunts form a natural chorus, another of Gilbert's innovations. Porter is touching because he states that every sailor is man's equal, (except of course his own.)  These statements inspire Josephine to expose her feelings to Ralph, complicating the prospective engagement to Porter.

Class is often leveled in the libretto and give boasts of being an Englishman new meaning.  "For although he might have been a Roosian, a French or Turk or Proosian, in spite of the temptations, to belong to other nations, he remains an Englishman."

In this spirit, a quick, improvised quip steals the show. "We must make America Great...Britain again."  Our former colonial status is more appealing now than it has been anytime since 1776.

Choreography is restrained punctuation, with neat rhythmic kicks and twisting taps.  This contrasts with Sir Porter's gross and funny gestures.

All of the performers do recitatif and patter well. We welcome: "Never mind the why and wherefore.  Love can level ranks and therefore."  In a trio, Sir Joseph, the Captain and Josephine, mix attitudes well:  "For a humble captain's daughter, and a Lord who rules the water and a tar who ploughs the water."

Angela Christine Smith is unforgettable as she suggests the denouement:  "Black sheep swell in every fold, all that glitters is not gold, storks turn out to be but logs, bulls are but inflated frogs."

Albert Bergeret's conducting was brisk and witty.  Delicious play between the singers and orchestra made you more appreciative of all instruments.

New York Gilbert & Sullivan Players are known for their skillful take on their namesakes, and this Pinafore, or was it Petticoat, is no exception.