A Curator And A Rabbi Walk Into A Bar... 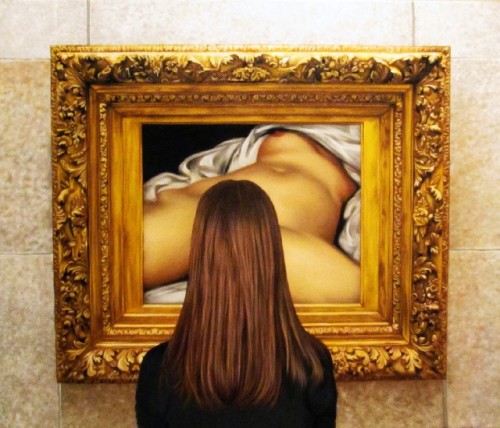 A young visitor has a close look at a painting by Courbet. 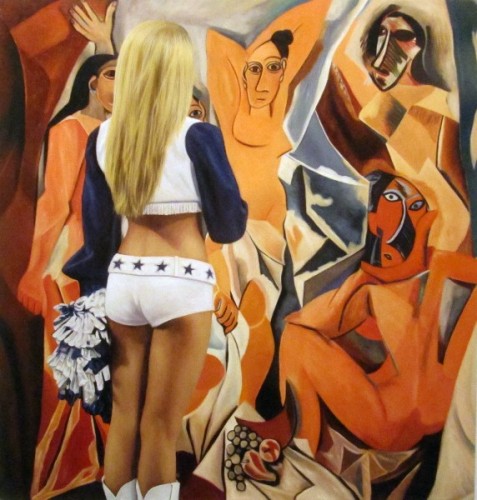 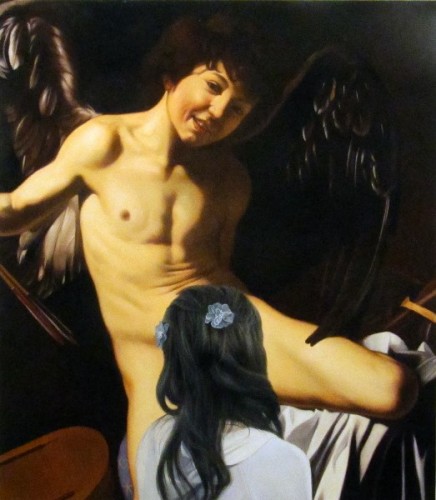 Homage to Eros by Caravaggio. 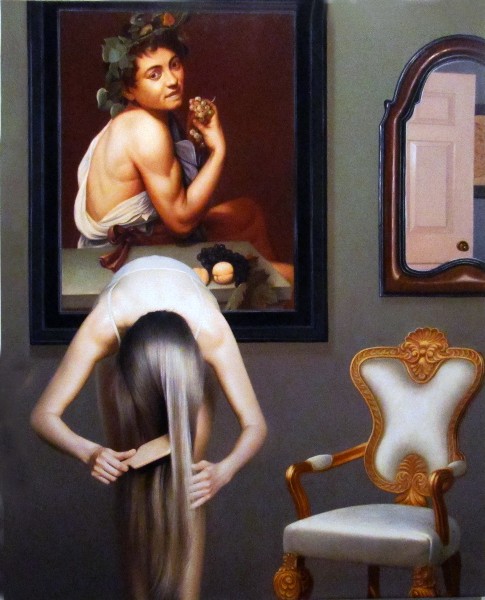 Grooming in front of Sick Bacchus by Caravaggio. 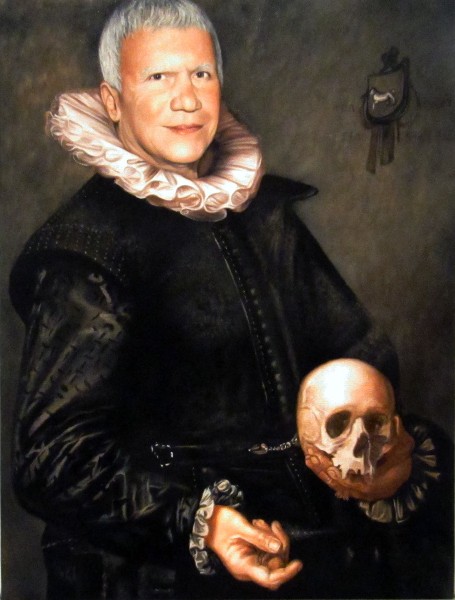 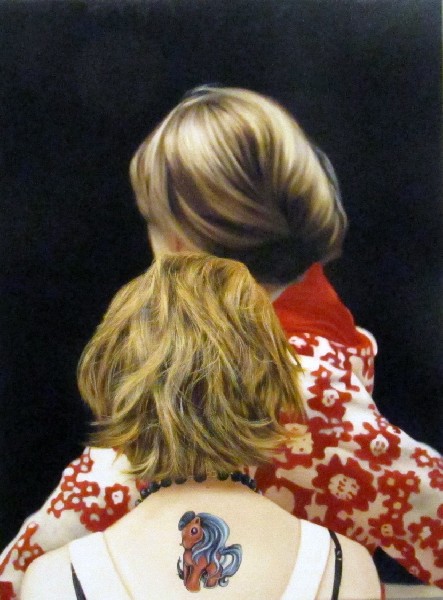 Looking at a Richter. 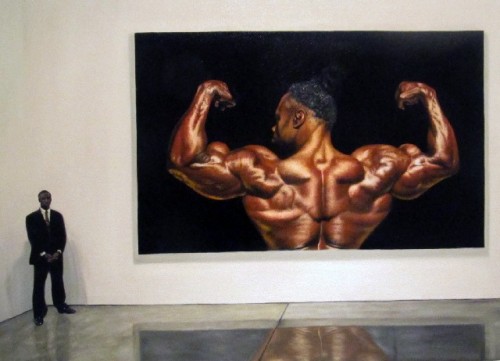 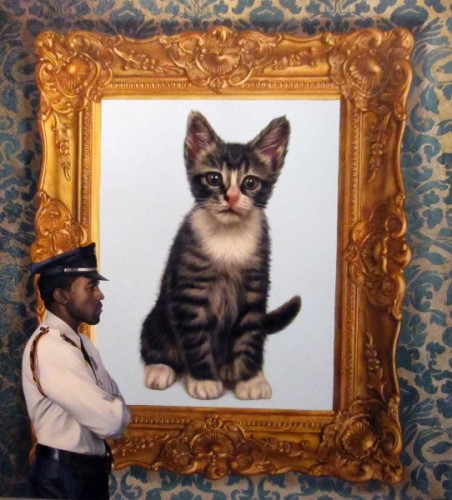 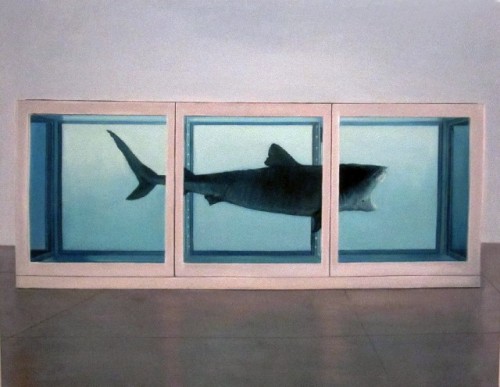 Evoking a sculpture by Damien Hirst.

The theme of art about art is perhaps as old as art itself.

In theatre we consider the play within the play.

A common motif in contemporary still life painting finds a reproduction or post card of a masterpiece pinned to the wall as a part of a trompe l’oeil composition.

It is a device that references sources of interest for the artist as a well as a reproduction in reduced scale that is a demonstration and testament to skills.

The exhibition of works by Marc Dennis A Curator And A Rabbi Walk Into A Bar... as the title and theme clearly states evokes an amusing experience. It is enjoyable to encounter humor in art but also risks devolving into a joke.

By definition that means work that is not to be taken seriously.

Once we get the visual one liner the impulse is to move on.

On an otherwise dreary day in Chelsea, there was pelting snow with unpleasant conditions, and the endless rounds of drab, enervating shows thoughts have lingered about this show.

While well executed with technical mastery there is no getting past the kitsch. Yet again the conundrum is whether to laugh with or at the artist.

Often this is a matter of how far the artist pushes the visual humor and its originality. Indeed there is enough critical mass of material to comprise a museum level survey starting perhaps with Duchamp and early Lichtenstein to Koons and Prince.

It is unlikely that Dennis would make the curatorial cut for such a project. But his work is an interesting sidebar to an evocative trajectory in contemporary art.

What holds my interest is the confluence between high art and kitsch.

It is best to approach his work with a background in art history.


Entering the gallery one of the first paintings we encounter entails the back of the head of a young girl staring into the crotch of a framed painting at her eye level. The well groomed hair implies a “nice” adolescent girl visiting a museum. In this case it would be the musee d’orsay in Paris. The painting in question is of “L’Origine du Monde” (The Origin of the World), 1866 by Gustave Courbet.

The painting at the time caused a scandal with its early depiction of public hair. There were lots of female nudes in 19th century French art but rendered with the sanitized, shaved look of a nude Barbie doll. If Barbie was “clean” her friend Ken had just a bump. Almost precisely a century later Playboy magazine went real with neatly trimmed pubes.

In another work a young face is thrust into the crotch of the provocative “Eros” by the Italian Baroque artist Caravaggio. The smiling nude boy was likely a young male prostitute or twink whom the artist paid to pose.

There isn’t always the sexual content. In another painting we see someone viewing what looks like a rendering of a Gerhard Richter painting of a woman.

These are the more interesting works.

Less so are kitsch rendering of kittens and roses of a reproduction, just a straight shot, of Damien Hirst’s embalmed shark in a multi-part tank. That was a star, oh so long ago, in the Charles Saatchi collection exhibition at the Brooklyn Museum. Curiously, the image seems quite dated today.

It was fun to see mega art dealer Larry Gagosian posed in an ersatz Dutch Masters portrait holding a scull. Since Dennis has other representation perhaps this is a form of death wish in so rendering the renowned and powerful dealer.

In the most upscale galleries, where works are worth a whole lot of money, it is the norm to see uniformed guards as one would expect in museums. During the recent gallery rounds I found some of them, particularly an African American stud in dark glasses, more intriguing than the works they protected.

This shows up as the theme of some paintings. There is an image of a guard next to a large work depicting the back of a body builder. Another deadpan security guy is positioned next to a large framed painting of a kitten.

Dennis proves to be a skillful artist.

The work may be more interesting when and if he drops the schtick and gets serious.

Then he could be just as boring as most other representational painters.