Broadway's Circle In The Square Theatre Little Fang Photo The cast of the current revival of Oklahoma! 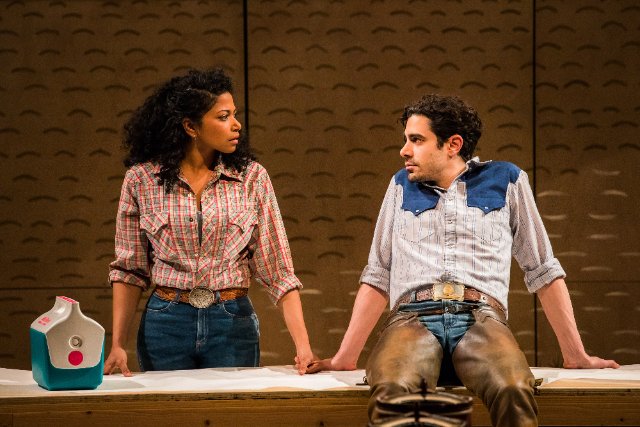 The wording on the Playbill at Circle in the Square Theatre does not deceive your eyes. It really does say Rodgers & Hammerstein’s Oklahoma!

Now, the sights and sounds onstage might make you think you need an appointment with your eye and/or ear doctor.

But what’s transpiring on that stage is a revealing revival of the classic, groundbreaking 1943 Richard Rodgers and Oscar Hammerstein musical.

With that said, visionary director Daniel Fish’s work on the show will make you admit that this is a vastly different – yet successful – Oklahoma!

Indeed, it’s one that speaks to folks living in 2019. In addition, this Tony Award-winning production for Best Musical Revival reveals characteristics of Oklahoma! that your older relatives may not have noticed. Why? Because a director at the time simply didn’t emphasize them.

Surely, there are dark undertones to this beloved musical. And the stripped-down, intimate and immersive revival, onstage at Circle in the Square through Jan. 19, deftly reveals them. The focus here is on the story and the characters, not mounting a huge Broadway production with big production numbers and scenic elements.

To be sure, Fish has left intact the libretto as well as the celebrated score. Of course, it includes such upbeat, celebratory numbers as the rousing title song and the lively “The Farmer and the Cowman.” After such numbers, especially within the intimate theater-in-the-round configuration, you feel as though you’ve just participated in an energetic hoedown and met people with whom you’ve instantly connected.

But you don’t have to look or listen too closely to realize that more than a hint of menace, tension and darkness suffuses this production, which unfolds in a seamless, cinematic manner.

Such moods mirror our own world, where dangerous folks hang around us innocuously — or lurk in the shadows, just beyond our line of sight.

And Fish’s approach unearths a tale of a strong, close-knit, indomitable community. It is one that’s strongly, even severely, at odds with outsiders. The stakes could surely be grave.

Of course, an obvious outsider is the farm hand Jud Fry. In other productions, actors have played him as little more than a brooding, introverted loner. But here, Patrick Vaill gives us an unstable, sensitive, human, yet dangerously menacing Jud. He seems to be just on the brink of committing an unthinkable act.

Interestingly, part of Laura Jellinek’s immersive, in-the-round set includes rifles hung up in the aisles leading into the audience seating area. If your keep your eyes riveted on the stage, you might not notice them. But, they’re present, alright. Might they belong to an outsider such as Jud or Native Americans staking claim to the territory before Oklahoma became a state?

While Fish hasn’t added Native Americans to this production, the familiar characters and plot lines remain unchanged. Ditto for the diverse, mood-enhancing score.

One change involves scenes taking place in Jud’s smokehouse. Specifically, the stage turns pitch black. Moreover, we witness, on a projection screen, vivid facial expressions on Jud’s face when he thinks about his death in “Pore Jud is Daid.”

Even Curly (Damon Daunno) is more cocky and seductive than sunny and charming. And there is a grisly, graphic scene involving Curly toward the show’s end.

Daunno is coolly charismatic as he struts about the stage, even grabbing a guitar to accompany his singing.

In regards to the musical’s iconic score, you won’t find a huge orchestra playing the songs as big, Broadway-style production numbers. Instead, orchestrator, arranger and music supervisor Daniel Kluger has re-orchestrated the score by, for instance, swapping big sections of instruments for isolated single musicians. Also, he’s reduced the number of orchestra members from 28 to 7, creating a bluegrass band. Its members sit onstage, in full view of the audience. They seem as much a part of the community as the characters – and the audience.

In an interview with Playbill magazine, Kluger said he’s “done things like take a line played by a group of woodwinds and make it plucked on a banjo so that it’s intentionally exposed.”

Such sounds can seem solitary and unnerving, reinforcing the tension inherent in the production. But these sounds can also convey a homey, intimate aura that fits right in with Jellinek’s set design. In fact, one could say that the set extends into the audience, where the in-the-round configuration creates a palpable sense of community. We feel we belong to this land as much as the characters and musicians. After all, during intermission, audience members are invited onto the stage for chili and cornbread.

During the show, those closest to the stage must feel as though they’re seated at the same tables as the performers. Crock pots, some labeled “Hot!” rest next to stalks of corn. As a result of these sights, the proceedings sometimes carry the feel of a festive, friendly farmer’s market.

But you won’t find sentimentality or innocence within this community. There’s plenty of sass and confidence to spread around, especially among the women. These days, a demand exists in live theater for strong female characters. You’ll find them, for instance, in Ado Annie and Laurie.

With the self-assuredness and daring of a life-long race car driver, Ali Stroker, as Ado Annie, races her wheelchair across the stage. This disabled actor, the first performer using a wheelchair to win a Tony Award, exudes , boldness, confidence, and charisma as the character caught between romancing Will Parker and Ali Hakim. Stroker’s Annie refuses to act in the least bit submissive to the male characters. Stroker, who won a Tony for Best Supporting Actress in a Musical, is particularly strong when she sings “I Caint Say No.” She performs the number without a hint of shyness or an “aw shucks” tone in her voice. Instead, an intensity and sense of contentment escapes her voice. It all suggests Annie is proud of the woman she is – and nobody can take that happy feeling away from her.

Meanwhile, Rebecca Naomi Jones also conveys strength, defiance and courage as Laurey. The performer refuses to play her as a shy, submissive character. At the same time, Jones credibly conveys her character’s vulnerability. There’s genuine-sounding panic in her voice when she expresses her fear of Jud.

No doubt, the female performers play their characters in such a way that would make today’s #MeToo advocates proud. These portrayals help differentiate this production from others.

Another major difference centers on the dream ballet, which usually occurs at the end of Act 1. Here, it takes place at the top of Act II. The ballet vividly, darkly and elaborately expresses Laurey’s torn feelings about Curley and Judd.

In this production, the ballet, which Gabrielle Hamilton dances with flair and intensity, seems to conjure issues such as race, inequality and the treatment of women. Certainly, this dream ballet mirrors issues relevant to modern times, while also more than hinting at Laurie’s sexuality.

While Hamilton dances, the band plays unpleasant chords and notes, including a jarring rendition of “Oh, What a Beautiful Mornin.’” A breathless Hamilton appears on a projection screen. With a thud, an object drops onto the stage and an acute sense of unease permeates the theater. Then, an image of an urban ghetto-like environment contrasts with the serene backdrop of a prairie.

Oklahoma!, one of the first musicals to seamlessly integrate story, song and dance,  always emphasized the latter sunny, serene image. But Fish has unlocked the darker, grittier aspects of this musical while hardly ruining this beloved classic.

It just goes to show what a skilled director with a clear, unique vision can accomplish.

For sure, this Oklahoma!, which will leave you with many emotions, is doing more than fine.

This revival of Oklahoma! continues its Broadway run at Circle in the Square through Jan. 19. The theater is located at 1633 Broadway (on 50th) in New York City. For more information and tickets, visit https://oklahomabroadway.com/