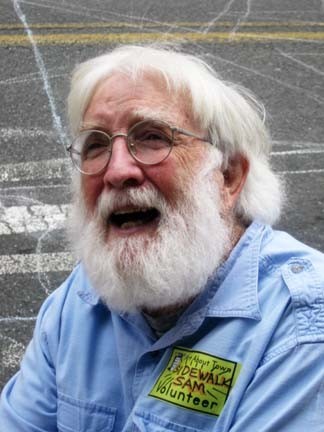 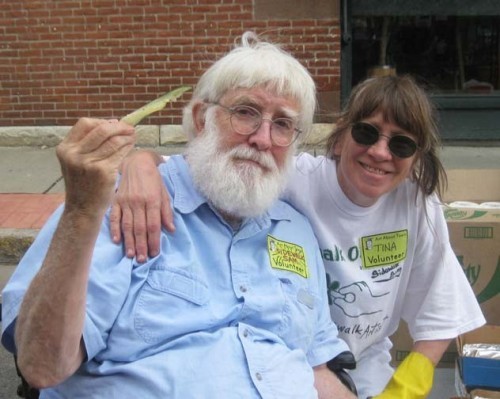 Sidewalk with his wife Tina on Holden Street in 2010. 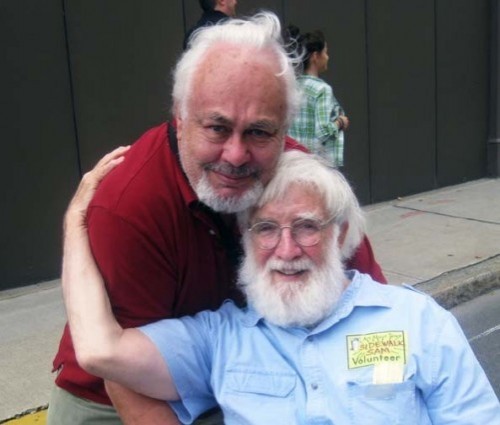 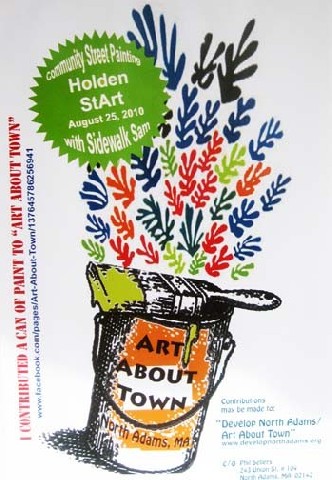 The Holden Street project for Art About Town. 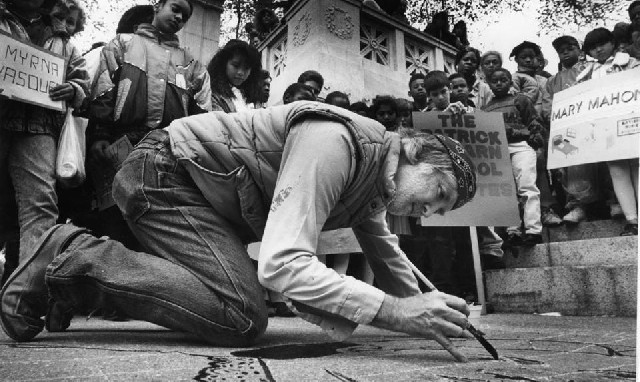 The early years as Sidewalk Sam. 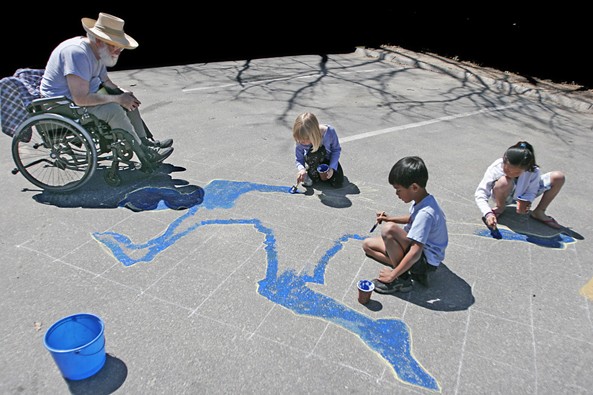 Working with children to execute his designs.

During the summer of 2010 the renowned artist Robert Charles Guillemin, A.K.A. Sidewalk Sam, literally rolled into North Adams.
Wheelchair bound because of an accident in 1994, in a specially adapted van, he drove from his Newton, Mass home where the artist (May 4, 1939 - January 26, 2015) died in his sleep.

Ironically, the accident occurred when he was attempting to clear snow and ice from his home. He died during a record setting Boston blizzard.

It had been decades since we had seen each other. We embraced as long lost friends.

It was an exciting time for the arts in Boston. Bob’s exhibition at the Rose Art Museum was a formalist exercise in neo constructivism. He would soon leave that behind taking his art to the streets where it was ephemeral and non collectable. Initially, while making chalk renderings of Old Masters on pavement, there was a bucket for spare change donations from passersby.

People stopped and watched him at work which was the performance aspect of his art. It was a part of his remarkable and lively showmanship.

During the struggle to bring contemporary art to Boston and its Museum of Fine Arts Guillemin was in the thick of it. Out of meetings for artists at the vast Parker 470 gallery, across the tracks from the MFA, emerged the formation of the Boston Visual Artists Union. It was unique in the nation and influential for a number of years. Prior to that Boston artists organized The Studio Coalition which presented America’s first Open Studios event.

With the artists Kristin Johnson, Todd McKie, Martin Mull, David Raymond and Jo-Sandman he was an activist participating in Flush with the Walls an action or surprise attack on the MFA. It was a hilarious, spontaneous exhibition in a vast, elegant basement men’s room.
Not long after that happening Perry T. Rathbone, director of the MFA, called me at the Boston Herald Traveler to say that the museum was appointing Kenworth Moffett as its first curator of 20th century art. It was the culmination of considerable pressure from Boston artists.

I always saw the sequence of events as connected. In dialogues with his daughter, the author and biographer, Belinda Rathbone, she insists that the appointment had been in process for some time. It was a part of the legacy of her father who was ousted by the museum’s board for his part in the scandal over an alleged portrait by Raphael.

From activist Guillemin remade himself as an arts evangelist under the persona of Sidewalk Sam. Given his penchant for proselytizing it is not surprising that as a young man he considered becoming a priest. Instead of the Gospel he preached the sermon of art.

A master of hyperbole as Sidewalk Sam he had the gift of gab. He spoke in tongues conveying the joy of art by bringing it out of museums and into the street. There the public viewed and literally walked over and wore down his technically proficient renderings of famous paintings.

Throughout the 1980s and 1990s, he organized chalk-drawing festivals, open-air art exhibits, and public art events that engaged participants in the creation of large mosaics, murals, and banners. In 1990 and 1991, Sidewalk organized the Boston Artists’ Summer Festival.

The idea evolved from seeing street artists working with chalk in Paris. It was in the spirit of a student at Julliard playing violin in subways for spare change. In the early 1960s after earning a BFA from Boston University he was in France to study at École des Beaux-Arts and the Académie de Grande Chaumière. As a part of that training he had permission to copy paintings in the Louvre. In 1967 he earned an MFA at BU.

While trained in high art he focused on a form of sophisticated populism. It reflected his motto "Entertain, Inspire, Empower and Unite."
The local arts community got a full blast of that. He was invited to make a proposal for a project in North Adams by Gail and Phil Sellers the organizers of Art About Town. They have worked with volunteers to make Sol LeWitt inspired geometric designs for the city’s cross walks.

In meetings Sidewalk, working with Gail and Phil, proposed to create his largest ever work in a parking lot near Mass MoCA. It would entail a gang of volunteers and take a full summer to complete. The intention was that it could be seen from space by satellites. Like the Pyramids, here in North Adams, it would be one of the contemporary Wonders of the World.

That ambitious project never got launched. But to give the city and potential sponsors a taste of what it would entail, in August of 2010, Sidewalk was on hand during the creation of a large and colorful design on Holden Street.

Instead of chalk by then Sidewalk was using paint for his street works. Given the flow of traffic it eventually wore away.

The memory of that occasion and the joy he evoked for so many through his conflation of high art and populism prevails.

While little of his work survives in museums and private collections few artists of his generation surpassed his ability to bring art to the people.

With a twinkle in his eye he was truly a master for the common man.

I am proud to say that I appreciated, wrote about, and stomped on his unique work.