Tabitha Vevers at the Provincetown Art Association and Museum 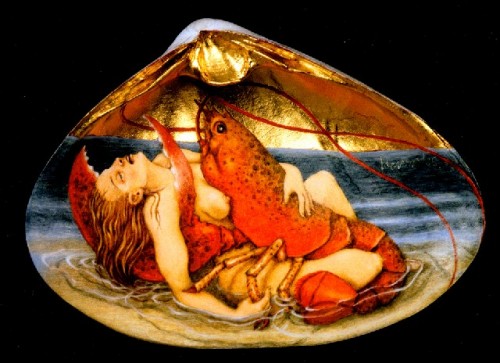 Shell Series "Rapture," 2005, evokes "Leda and the Swan." Images courtesy of the artist and the DeCordova Museum. 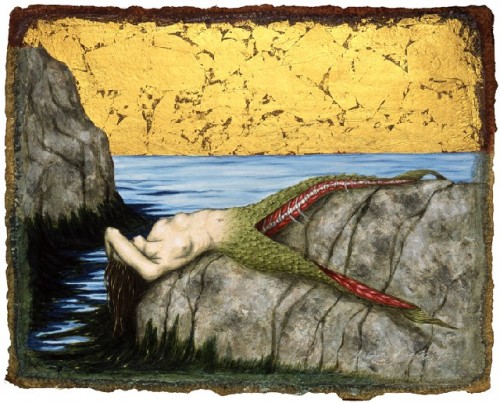 Secular Icon "When We Talk About Rape," 1992, depicts a ravished mermaid splayed out on a rock. 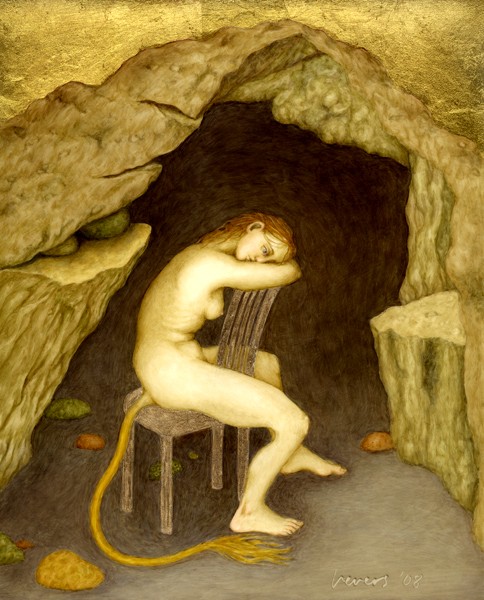 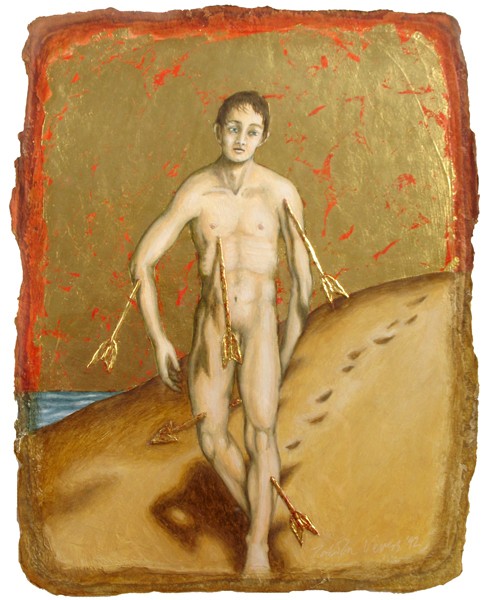 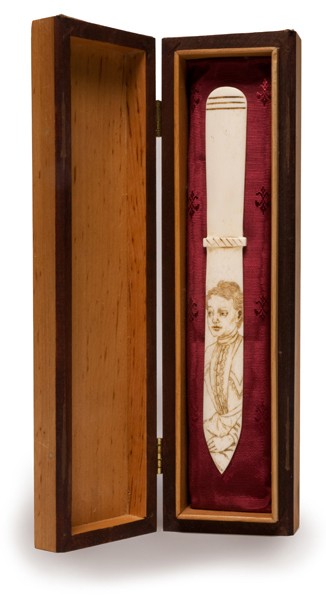 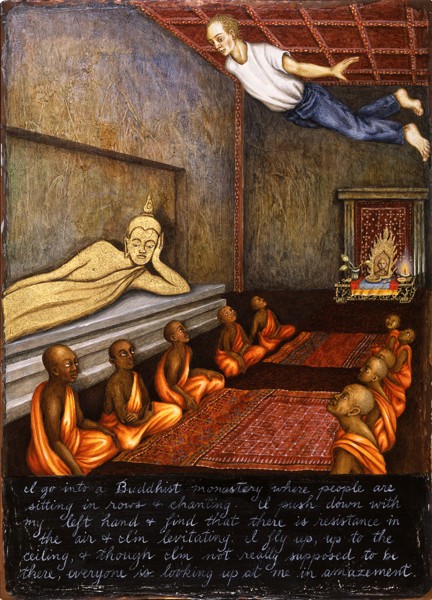 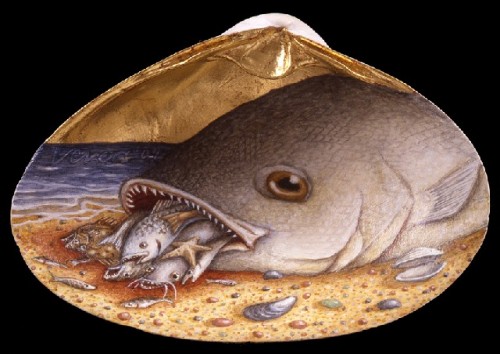 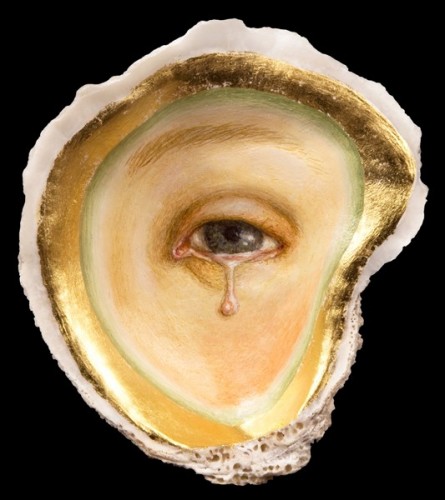 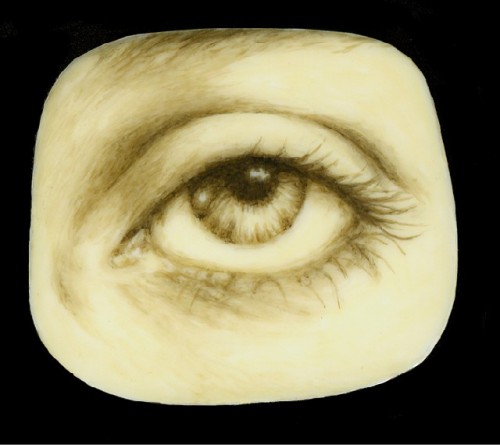 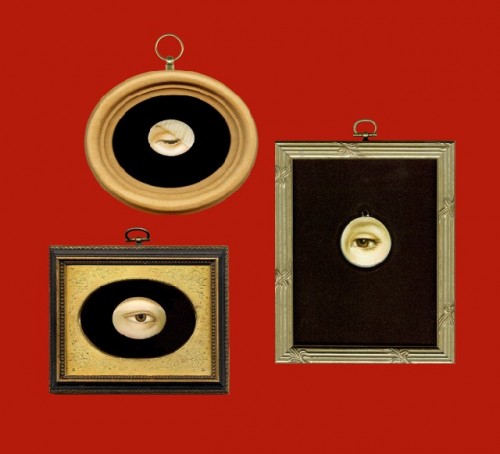 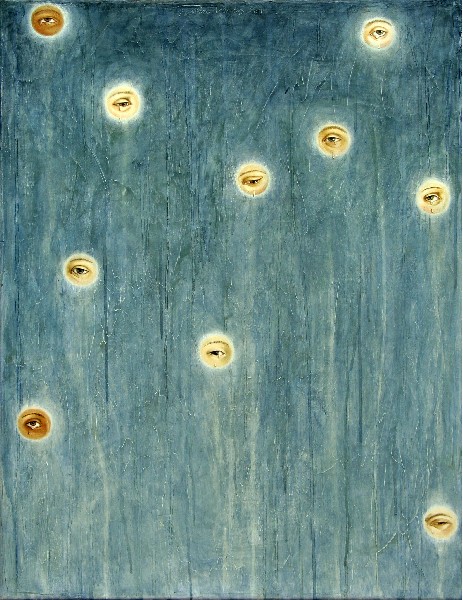 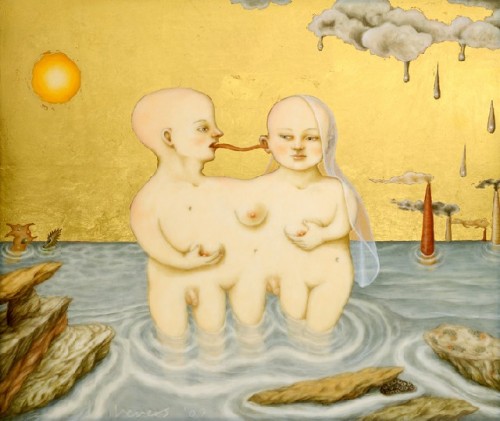 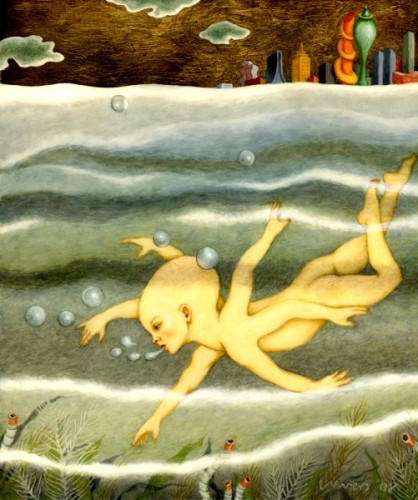 The intimate scale, and exotic materials including gold leaf, ivory, and sea shells, signifies work that is feminine, while the subject matter that covers rape, bestiality, gender identity, and genetic mayhem may be described as feminist and politically charged. The iconic approach and exquisite rendering initially implies the decorative and soothing on the eye but on closer examination, the artist in the past has provided magnifying glasses for the convenience of visitors, the work of Tabitha Vevers, evokes anything but those deceptively pleasant first impressions.

While the subject matter is often tough, confrontational, and thought provoking it is always presented in a manner that is lyrical, narrative, and redolent of poetic fantasy. Her signature style is linked to the visionary work of  medieval manuscripts, Byzantine icons, the hell images of Bosch, or the mysticism of Blake. The combination of these disparate elements has distilled into an approach and style which is unique to the artist.

While she studied and worked shoulder to shoulder with the tough guys at Yale she evolved from and utterly rejected their macho mantra of swing from the shoulder, big paintings emanating from the trickle down of abstract expressionism. Instead, Vevers, quite shockingly for the time and context in which she grew up,  opted to work from the wrist down. Her approach ran counter to the conventional art world thinking that the way to a museum retrospective was to create work that was big, red, and shiny.

Instead of blowing the socks off of viewers she enticed us to get up close and personal. She drew us in, perhaps for some of us macho types, kicking and screaming into an aura and persona that is dangerous, erotic and seductive. It is that visual voyage from which no traveler returns the same or even intact. Her work is full of  mermaids and sirens that lure us onto the jagged, rocks of machismo or drowns us in a lover's embrace that drags us to the bottom of an ocean of emotion and ecstasy. It is definitely not a guy thing.

Not surprisingly this exhibition is the third in a series organized by the DeCordova focused on solo exhibitions of women artists in New England. It also represented the final exhibition of Rachel Rosenfield Lafo who recently left the museum after 24 years as its Director of Curatorial Affairs. Lafo wrote the essay in the handsomely illustrated 32 page catalogue which includes a detailed check list of works from 1989 to 2008. Another two pages include selected one person and group exhibitions,  selected awards, professional activities, and collections. In an otherwise small but thorough publication it is surprising that there is no bibliography. Drawing primarily from taped interviews and unpublished artist statements Lafo did not attempt to place the work in a wider critical context.

During the 1970s I undertook a study of the Provincetown arts community while I was a graduate student at Boston University. The then director of the Provincetown Art Association and Museum, Ellen O'Donnell (Rankin), was generous in connecting me with individuals to help my research. Tony Vevers was a particularly rich source, as an artist, curator, critic and charming raconteur. His enthusiasm was infectious and it was largely through Tony that I became interested in the figurative expressionists- Bob Thompson, Jan Muller, Jay Milder, George Segal, Lester Johnson, Red Grooms, Allen Kaprow (founder of Happenings)- who showed at the seminal Sun Gallery. One of Tony's shows for Sun Gallery was censored because a painting depicting pubic hair was visible through the window.

Over the years, particularly at Long Point Gallery openings, where Tony was a member, I got to know his family which included the sculptor, Elspeth Halvorsen, and their artist daughter, Tabitha Vevers. She later married Daniel Ranalli, my colleague for many years at Art New England, and later chair, when I taught for the Metropolitan College of Boston University. Some years ago I invited Dan to curate a show of the work of Tony, Tabitha and Elspeth for the gallery of the New England School of Art and Design. By then Tony was in declining health so it made the occasion all the more poignant. In an odd way the project also made me feel like a part of the family.

Provincetown has changed a lot, and not for the better, since I first slept in the Dunes as a college student in the 1960s. One rose with the sun and wandered into town for a loaf of fresh, hot, Portuguese bread at the bakery, and then sat on the pier to ponder the morning tide. Dan and Tabitha have evolved as my eyes and ears to the community of artists. Dan wrote a wonderful article for BFA on their experiences in the isolation of the Dune Shacks. Ranalli's Dune Shack article

Over the years I have viewed and written about Tabitha's work on many occasions. The opportunity of a retrospective is that it pulls it all together. One has the ability to see the development over time and how the technique and its insights sharpen and intensify. This project brings back vivid experiences and memories.

Again, this may be just a guy thing, but the most stunning, riveting, and galvanic piece is "Rapture" (2005) from the Shell series. In the interior of a quahog shell, perhaps saved from a beach walk, is a nude woman in shallow water in an ecstatic pose fornicating, in the Missionary position, with a gigantic, human scaled, red lobster. Its feelers or antennae provide a whiplash echoing the curving space of the clam shell. Of course, the image evokes the lost but widely copied study of "Leda and a Swan" by Michelangelo. The god Zeus/Jupiter seduced men and women by an ability to assume any form from a bull or swan to an eagle and even, in the most sensual of all paintings, a cloud that shags Io in Corregio's mannerist masterpiece "Jupiter and Io" Her shall painting "Rapture" conveys Tabitha at her best.

During her Provincetown, 2007 "Eden" show she depicted a series of mutants. There were variations on transgendered  creatures including one with two heads, male and female, but several breasts, five legs and double sets of male and female genitals. There is something here about pollution and the genetically altered food that we eat. Really, I hope I don't live long enough to see all  that come to pass. But she has given us a multiple head's up.

In 1998, work that was included in the NESAD exhibition, she was creating a series of knife, or scrimshaw images on pieces of recycled ivory. These were mounted in their own box cases. In a feminist trope they were connected to infamous women saints and sinners including Judith, the Biblical woman who saved her people by seducing Holofernes, then chopped off his head while he slept, and Lizzie Borden, who gave her folks 40 whacks with an ax. There was indeed a cutting edge to that series.

The Lover's Eye series from 2002 entailed appropriating a single eye, set in a frame which was a part of the work. It was a challenge to identify the subject. This minimalist approach was less invasive of the psyche. Perhaps she needed some respite from the heat oppressed mind.

What is both anachronistic as well as experimental about the work is the attempt to conflate a very personal and charged narrative,  as well as, an approach to miniature painting that owes more to Old Masters than contemporary art. By remaining apart from other trends she stands out as original but also falls out of the loop of the mainstream. In that sense the DeCordova is to be applauded for seeking out women who have the courage to march to a different drummer. Tabitha Vevers is one of a kind.