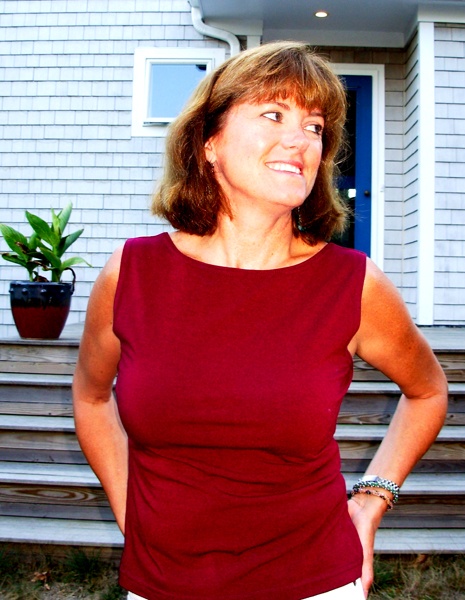 Tabitha Vevers in front of her Wellfleet home. Giuliano photo. 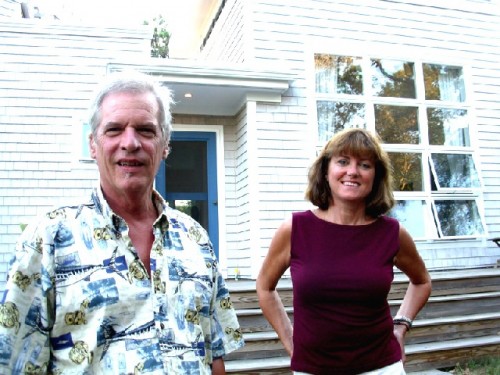 Tabitha and her husband the artist Daniel Ranalli. 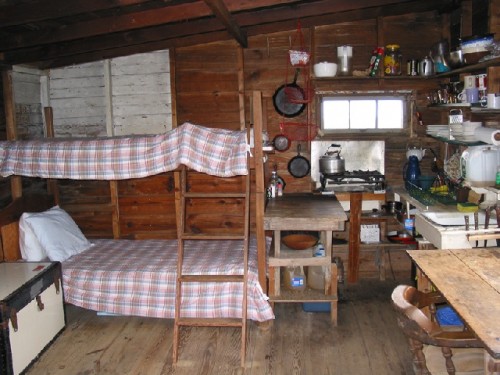 When staying in the Dune Shacks she got the table and he got the dunes. Ranalli photo. 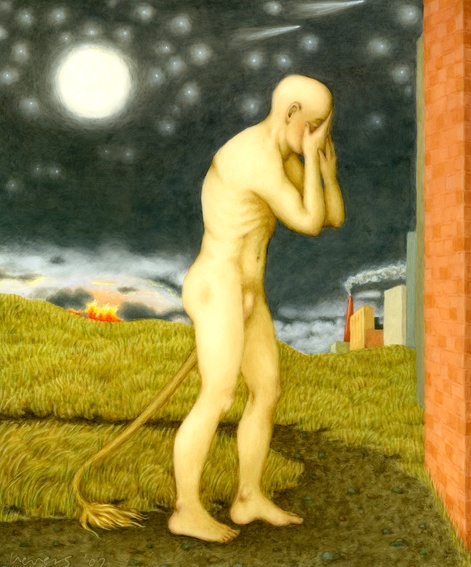 Remorse from the Eden series. Images courtesy of the artist. 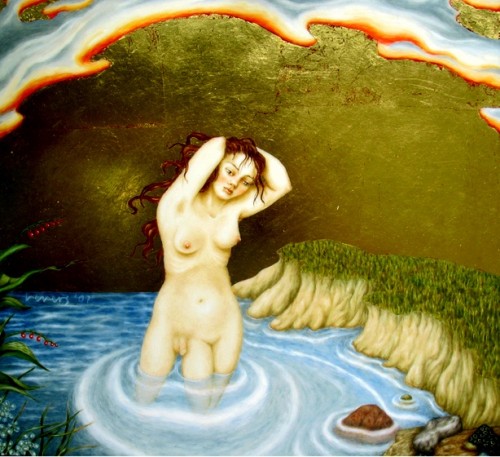 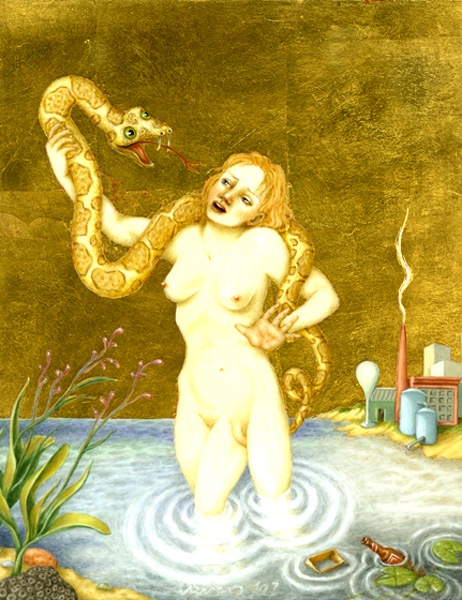 In Trouble in Paradise there is the temptation of the serpent. 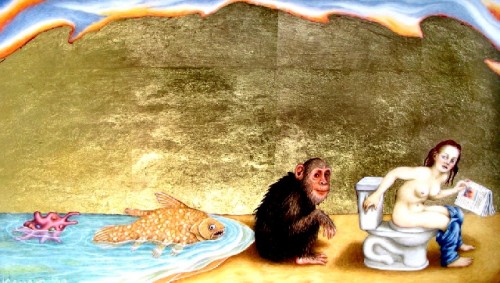 Her view of Intelligent Design has an odd twist. 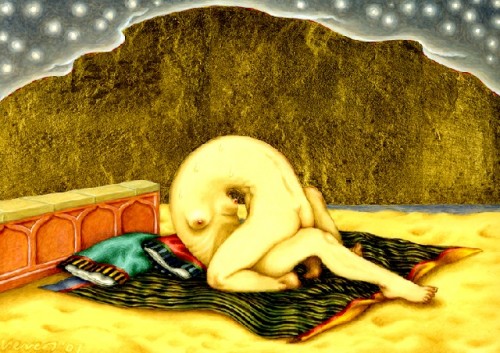 In Not 2 But 1 the creature engages in autoeroticism. 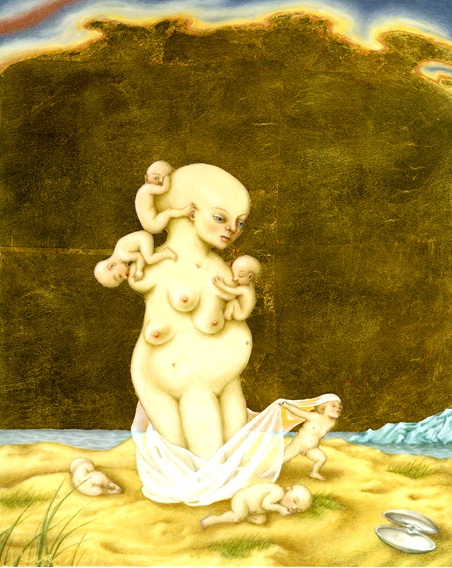 Once we have destroyed the planet this is how we will evolve. 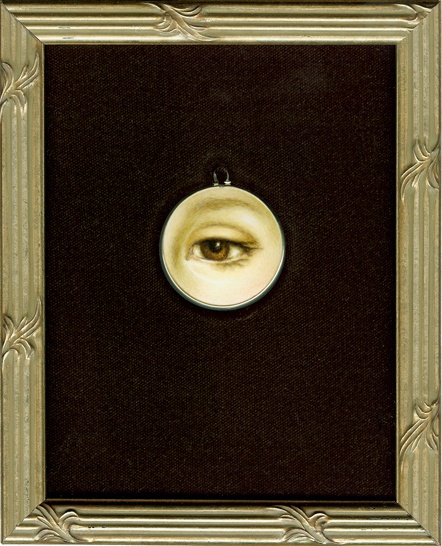 The eye of Victorine Meurant from Manet's Olympia. 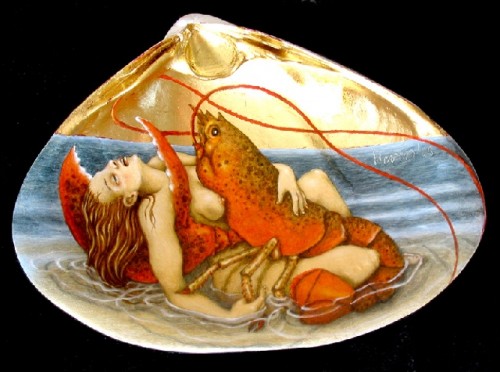 In Rapture from the Shell series a woman makes love to a lobster. 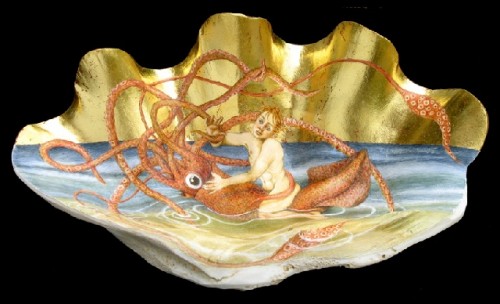 Another piece from the shell series. 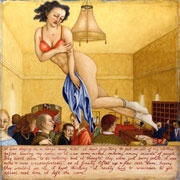 From the Flying Dream series.

The series Eden which is currently on view in Provincetown at artSTRAND Gallery through September 12 started as a doodle at 4 AM. Tabitha Vevers recalled that "It was an amoeba with six legs, two heads, breasts and genitals floating all over the place. What I was thinking about involved the rift between science and religion. So much of the conflict is based on issues of sex and gender. Differences about gay marriage, abortion rights and  embryonic stem cell research. It evolved into thinking about after we destroy the planet  perhaps we'll reemerge or evolve beynd the conflict as multi gendered single cell organisms."

There are nine "large" pieces and two smaller ones in the Eden series which has taken the past year to produce. The idea is ongoing but she showed it in progress. Her next regularly scheduled exhibition will be in Boston with Pepper Gallery in October of 2008. So we will wait and see where the series goes between now and then.

When I saw the 8x10" and 11x14" simulated ivory material the initial response, as I told her. was that the new work seemed "huge." In recent years I was used to paintings on the interior surfaces of clam shells she found on the beach or on recycled piano keys as scrimshaw. Some of those works were so intimate in scale that she included magnifying glasses in the gallery inviting viewers to see the details enlarged. She discussed this as a conscious strategy to draw people in and create intimate relationships between the viewer and the work. To have people make a commitment to the images and their exotic content.

This struck me as counter to the conventional art school wisdom that to attract attention  make it "Big, Red and Shiny." Grad students today are urged to think big and to create work scaled for the international circuit of Biennials. But Vevers, with remarkable understatement, described coming of age, Yale Class of 1978, at a time when careers were  not discussed in studio classes. It was in fact anathema. "That sounded like wanting to be a commercial artist."

It was an interesting time to be at Yale which had just turned coed. There were 70% males back then. As an undergraduate she majored in studio art and minored in art history. She sat in on graduate ctits with Al Held and John Walker, which were pretty brutal. Lester Johnson (a sweetheart) taught drawing in a unique manner. "He told us to draw what is closest first, at one point, holding out a pack of Marlboro cigarettes. Initially she made large work. During a recent visit to the home of Tabitha and her husband, Daniel Ranalli, a photographer and head of the arts administration graduate program at Boston University, I toured their Welfleet home recognizing works hung on the wall. I encountered a small, abstract work which stumped me. "That's the road not taken," they laughed in unison. It dated from just after her undergraduate days and represented a direction that was abandoned in favor of narrative work.

The study of art history proved to be an important influence. "I really liked Giotto" she recalled. "Those early Pre Renaissance icons with their gold leaf and narrative aspects." This has cropped up strongly in the Eden series which involves gold leaf backgrounds as a metaphor as well as a pictorial device she enjoys because of its reflectivity provided both light and darkness depending upon the angle from which it is viewed. This led to asking if she were religious. That was prompted by the theme of Eden which is about Genesis as well as "Intelligent Design" Darwinian and Post Darwinian aspects of evolution. "Not really" she responded. "I came from a long line of atheists which is why I am able to approach the narrative in a secular manner." Her parents are the well known Provincetown artists Tony Vevers and Elspeth Halvorsen. Tony was a member of the former Longpoint Gallery which showed the all stars of his generation. He was also active as a curator producing numerous exhibitions and catalogues for the Provincetown Art Association and Museum.

We explored the idea that she likes to work in series. Four or five years ago she created some 60 works, similar in scale to the Eden series, on the theme of "Flying Dreams." She collected flying dreams from about 200 individuals. I asked what they meant but she wasn't interested in them from the viewpoint of psychology. For her, it was more about the narrative aspects and their metaphors. She found a common sense of joy in having the experience of the sensation of flight. There were gender differences. Men concentrated on the technical aspects, the mechanics of flight. How they took off and landed. While the dreams of women were about environment and context. The series was produced on metal evoking the Ex Voto paintings created by devout Mexicans, with text on the bottom, in celebration of prayers for miracles. She sold most of the works in the series but has thought of doing a book on the subject.

Another series involves "Lover's Eyes." It started in 1995 and is ongoing. "These are paintings of women's eyes taken from famous paintings of nudes by men" she said. "We usually think of these nudes as representing the "male gaze." But isolating on the eyes of the women it becomes the model's gaze looking at the viewer. Mostly the models are anonymous but I did Victorine Meurant who was Manet's model for the famous nude Olympia. There are about 40-50 works in the series so far. Another of the eyes belongs to the  model and photographer Lee Miller who was associated with the surrealists. She was the eye for Man Ray's metronome piece called Object to Be Destroyed."

The Unicorn Series involved erotica and women with horns growing out of their foreheads. They often involved odd situations like "A unicorn (woman) going down on a man and she accidentally pierces him through the heart with her horn. It is called Dangerous Liasons. It is a kind of "whoops" moment and causes the viewer to do a double take. The series was created on recycled piano keys. There is usually a conceptual aspect to the work as the horns of the unicorn are in a sense like ivory which is why I used that material."

Why do you opt to work on such an intimate scale? "Partly it just feels right" she said. "I started out doing big work about four feet square. But it just felt too easy for the viewer to walk on by thinking they could take it all in from a distance. It was possible to look but not be engaged. It was possible to look but not be engaged. When you make smaller, more intimate work you get a more intimate audience. People become less guarded. There is a one on one dialogue with the viewer. I try to slap them on the head with something small. I do what I do it's not a career move. I came of age before aesthetic decisions were career moves."

About the exotic materials? "What got me into ivory was the Women and Knives series. It was about women who create acts of violence with knives or blades. Like Lizzie Border or Karla Faye Tucker. She was on death row for double murder with a pick ax. Her mother had pushed her into prostitution at the age of six and she was high on drugs when she committed the crime. She found religion, and although she never expected to go free, she wanted to live to work with other women. Governor George W. Bush refused to grant her clemency and she was executed. As a culture we don't know how to deal with the issue of women who act with violence."

The latest Eden series strikes me as some of the strongest work of her career. It has never seemed more radiant, pristine and galvanic. Paintings are rendered with remarkable precision in a manner that evokes the Italian Renaissance Masters that inspired them. But with a very contemporary iconography. While Vevers draws upon the art and style of the past she also believes strongly in being of one's time. So the narrative here is less about being expelled from Eden, as in the Book of Genesis, and more about how the planet, a potential paradise, is being spoiled by human waste and environmental damage. We are our own worst enemies. The human species is the only one known to foul its own nest. In one work there is an interesting take on the notion of Intelligent Design. In a single horizontal piece we see a fish emerge from the sea, evolve into an ape and then at the far right of the panel we see a human figure seated on a toilet crouching over. Frankly I was puzzled by the image and remain unclear about a lot of the works in the series. Particularly, its aspect of mankind evolving as hermaphrodites.  In one work Not2byut1 is there is a nale and female merging into one though making love.

Is Eden a metaphor for paradise? "It could be" she responded "But we are screwing it up. There are too many things we lack. There is everything here we need but we are destroying it through conflict and greed. There is violence and global warming. In my vision, if we destroy the planet, we will devolve into multi gendered, single celled amoebas and have to re-evolve again." This is certainly an apocalyptic vision and we will watch how the series grows and expands.

While Tabitha is not an "art star" she has supported herself through the work. "I have never been prolific" she said. "The paintings are slow and take a long time to build up in very thin glazes of oil paint. Making a painting is an incremental process. I am working on Ivorine which is a synthetic material used by miniaturists who paint portraits. It is a translucent plastic with a velvety surface you can paint on directly with no need for gesso. Light bounces off of it and gives a nice glow to flesh tones. I had some sheets 16 x 20" made for me in England."

Have you used them? "Not yet" she replied with a laugh. For Tabitha that scale would be Really Huge. Right now the works are "big enough." Also, it allows for working in an intimate studio. She recalled when she and Dan spent time in the Dune Shacks in Provincetown. It was a tiny space with just one small table. "I told him, I get the table and you get the dunes." He was shoved out the door to create his raked Zen series. Which is a great arrangement until it rains. Oh well.