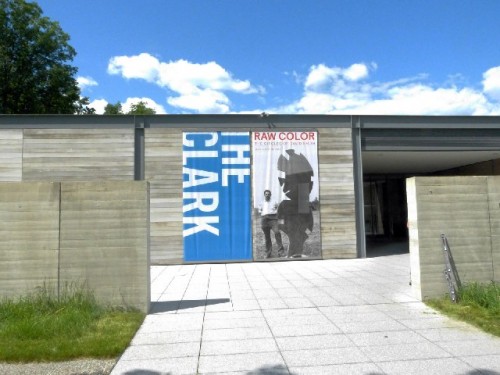 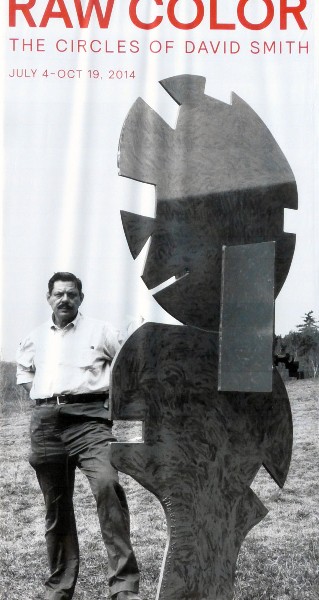 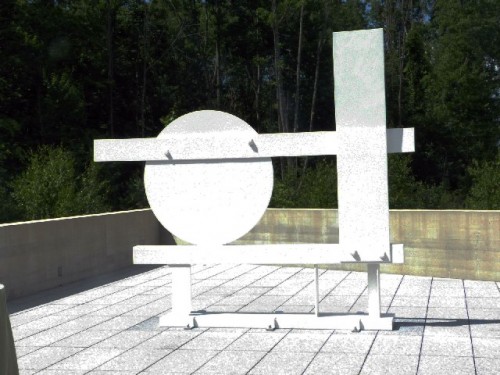 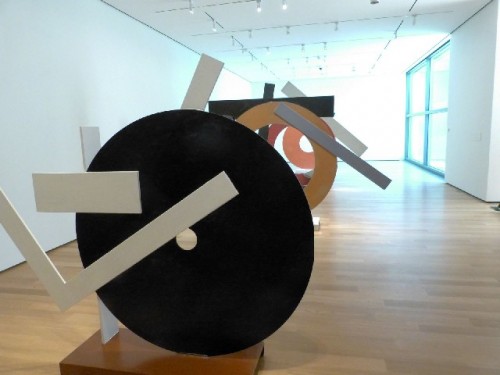 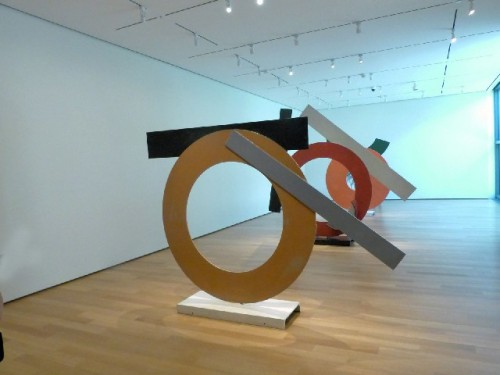 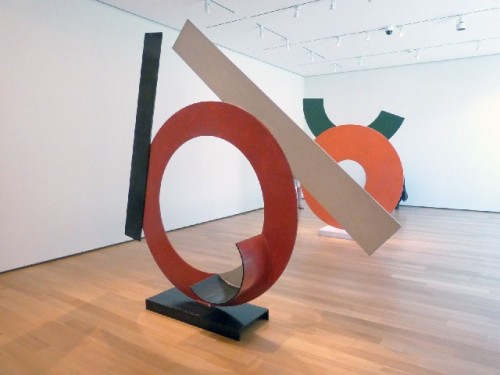 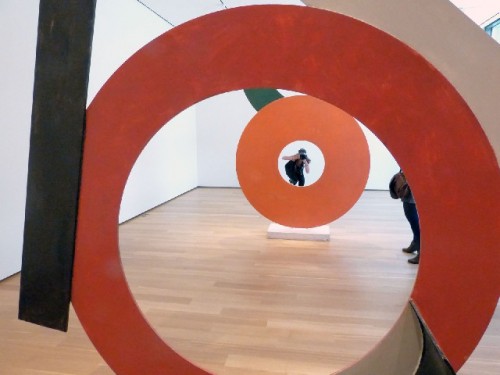 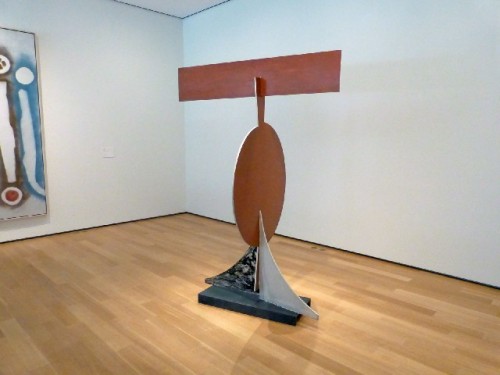 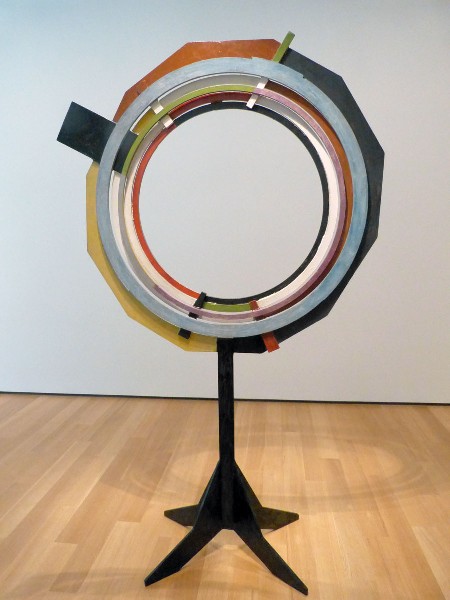 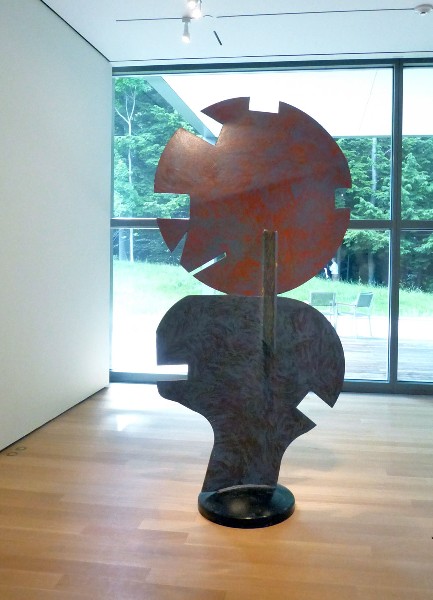 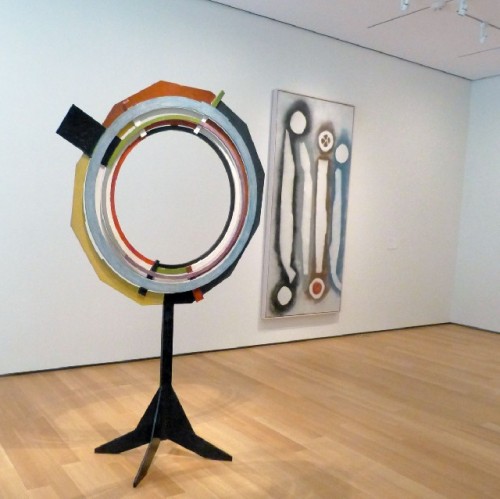 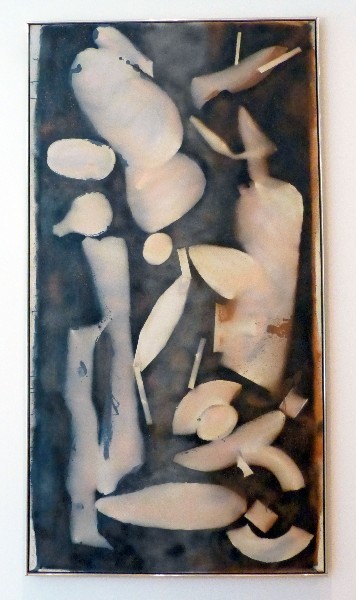 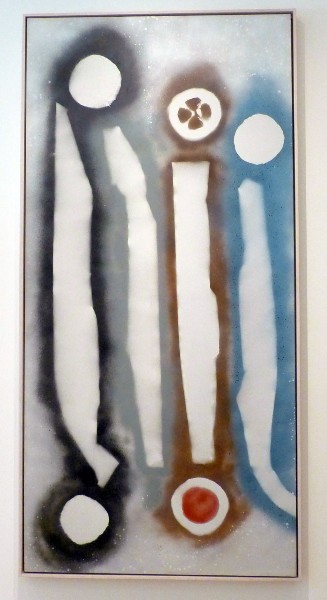 In the Post War era of the New York School and Abstract Expressionism painters proliferated. Largely because of the embrace of the leading art critic, Clement Greenberg, for lack of a better category, David Smith was its singular sculptor.

Smith and his wife left New York City in 1940 and purchased property at Bolton Landing in upstate New York near Lake George. There he enjoyed the large studio required for creating often human scaled works. These were then set out in the surrounding fields where they caught the natural light and shadow that enhanced their forms against nature.

This summer the relaunched Clark Art Institute is presenting Raw Color: The Circles of David Smith. Smith generally worked in series and the Circles were created in 1962 and 1963. Displayed in two galleries with related works and examples of his stenciled, spray paintings it is the first time that the series has been seen together since a 1982-1983 retrospective at the National Gallery.

The Clark’s exhibition in its Stone Hill Center, which is a part of the Tadao Ando expansion and renovation which opens this week, was curated by David Breslin. He is working with curator Harry Cooper on a major selection of post war American art Make It New that opens at the Clark Center on 2 August.

“In this period, critics thought color and sculpture couldn’t go together,” Breslin said. "So many sculptors are indebted to him because he took that risk.”

Driving home from a bar Smith in his pickup truck raced an artist friend. Smith, like the seminal artist, Jackson Pollock (January 28, 1912 – August 11, 1956), died in a resultant crash.

With his mistress Ruth Klingman and her friend in the car at the time, Pollock, then at the end of his rope, put his foot on the accelerator on the way to a party in East Hampton. It was essentially a suicide which only Klingman survived to write about.

The demise of Smith was tragic but not, like Pollock, deliberate. He was then at mid career working on his renowned Cubi series created with elements of stainless steel. He intended to paint them and there are examples of that in the collections of The Fogg Art Museum and the Chrysler Museum.

Some had been primed with an under coat of paint anticipating the final color. In a famous decision Greenberg, as executor of the estate, ordered the primer removed. Today we know the Cubi series for its brushed and buffed, stainless steel surfaces. As such they are entirely satisfactory. Similarly, Classical Greek marble sculptures, which we so admire for their material, were often garishly painted.

The combination of paint and metal sculpture is an aesthetically daunting one. It worked for Calder particularly in the late, monumental Stabiles which he had fabricated from maquettes. The scale and approach of Smith, who did his own welding and painting with assistants, is always more complex. We tend to evaluate the works as individual and unique encounters.

The installation at the Clark, which sets them in a row, encourages us to absorb the series as a whole. There are vistas that allow for looking through the circles as though they were a telescope. Walking through the galleries we locate positions that allow for examining the works as a totality. We can also walk up to and examine individual works.

There is a single work, painted white, at the edge of the terrace with gorgeous distant views across the Clark’s 140 acre campus.

Primarily the Circles entail that signature large form then enlongated, narrow rectangles, and in one a curved segment of a tube, attached at angles as accents generally in black or white. A piece has a half circle instead of a rectangle attached to its top as a variation on the theme. With their dominant, two dimensional flatness the Circles are more graphic than sculptural. There is a prevelance of front and back views rather than dynamic movement or torsion. Those qualities equate the series to Russian Constructivist sculptures.

Prior to Smith the Spanish artist Julio Gonzalez (21 September 1876 - 27 March 1942) created welded steel sculptures. This influenced Picasso to make similar experiments. As a young artist in New York, during the era of the Depression and WPA, Smith knew of their work.

Some years ago the Boston University Gallery exhibited Smith's fifteen Medals for Dishonor (1937-1940) with related sketches and collages. It caused lively protest when I assigned my BU avant-garde seminar to view and discuss the exhibition. There was rage about its sexism and political sentiments.

For me, most significantly, they were works in bronze relief which attested to traditional techniques and skill in figuration. It was a vivid statement of his pacifist views. To avoid the draft during WWII he took a defense job at American Locomotive Company, Schenectady, NY assembling locomotives and M7 tanks.

As a factory worker and commercial welder Smith had the opportunity to perfect his craft and technique. It also confirmed his approach of creating works with generic, industrial materials. Instead of casting bronze he explored the approach of direct metal.

This included welding found materials into inventive, surrealist inspired, works with aspects of narration. There is a whole genre of sculptors who followed this approach. But Smith also pursued a more formalist, abstract manner which was celebrated by Greenberg and his rival the critic Harold Rosenberg.

As arguably as one of the two greatest 20th century American sculptors we can never have enough of the work of David Smith. That said I am not sure that this series with its bright, flat colors and circles works for me. There are familiar and disturbing internal dialogues. It’s that whole color thing and the flatness of the pieces that make them difficult to embrace.

This is a brief review and the topic is a matter for art historians and experts on Smith to debate. Where do the Circles belong in Smith's oeuvre? The fame of the artist squashes debates about the work which were more intense a generation ago.

When the work of an artist reaches a level of general acceptance there is less discussion of complex and problematic elements. Not all works by the greatest artists are successful.

This is a conundrum likely to occur only to a handful of visitors to the Clark. Another version of this might be speculation about how many mediocre Renoirs Sterling Clark collected?

On the plus side it is remarkable that The Clark is showing 20th century American masters like Smith and the much anticipated survey of works from the National Gallery.

This is an important aspect of the extreme makeover and upgrade from The Clark we have known. Previously the museum presented wonderful but mostly safe exhibitions. Moving into the 20th century is so much more adventurous and fun.

So far there has been little indication that The Clark intends to collect modern and contemporary art. During the media opening the director, Michael Conforti, hinted at forming a collection of sculpture for its bucolic campus. He mentioned that Janet Cardiff and James Turrell were visiting and exploring possibilities for site specific works.

There is also more synergy with nearby Mass MoCA and Williams College Museum of Art as an eclectic buffer.

As Breslin told me the Smith show was one that wouldn’t be done by Mass MoCA. He was cautious about discussing a program of modern and contemporary art that complements but does not interfere with that of Mass MoCA.

Sorry. I disagree. Blurring the edges with exciting and challenging exhibitions will be lively, healthy and a win win for visitors to the Northern Berkshires.