Tastefully Quabbin - A Bouquet Of Flavors 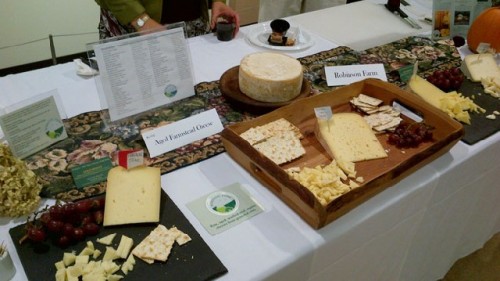 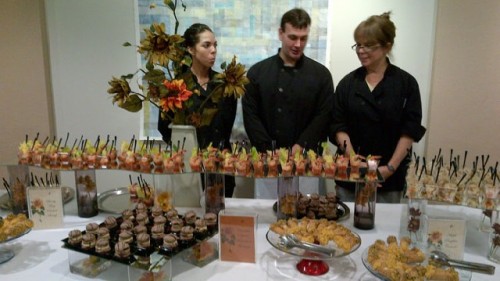 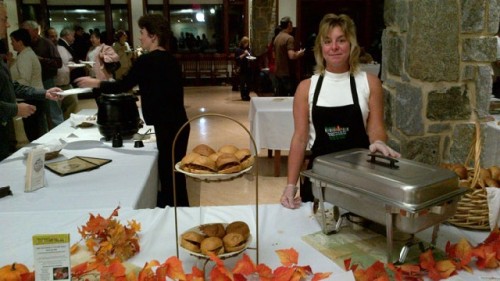 Pulled Pork on a bun from Backyard Grillin’ and chowda from the Barre Mill Restaurant. 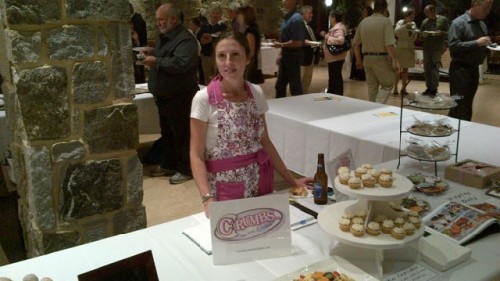 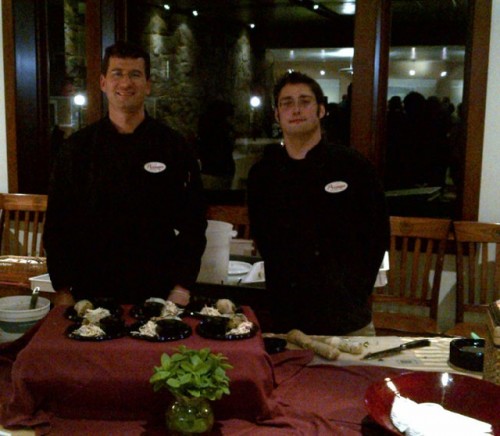 The Picasso chefs, humbly accepting my praise and a request for a refill.... 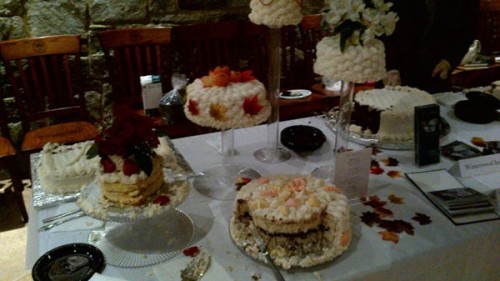 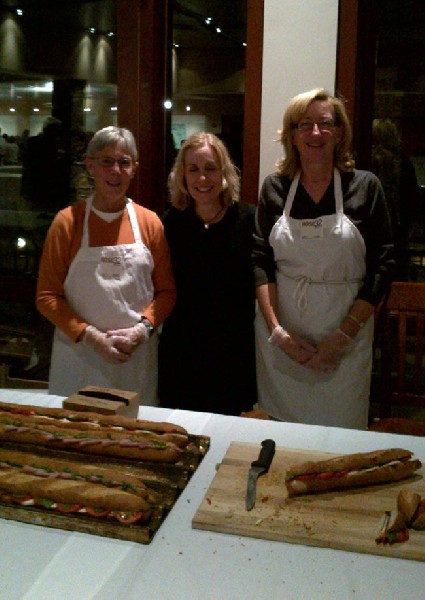 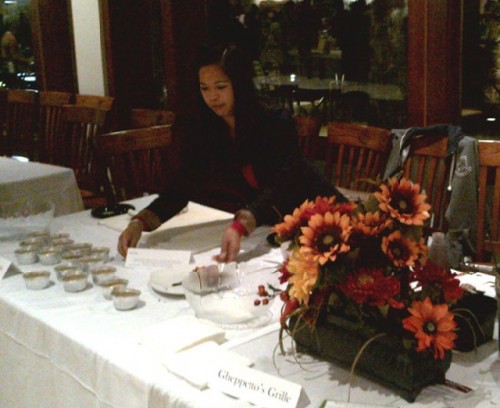 The grilled portabella has given way to the Creme Brule that now rules the table of Gheppetto’s Grill. 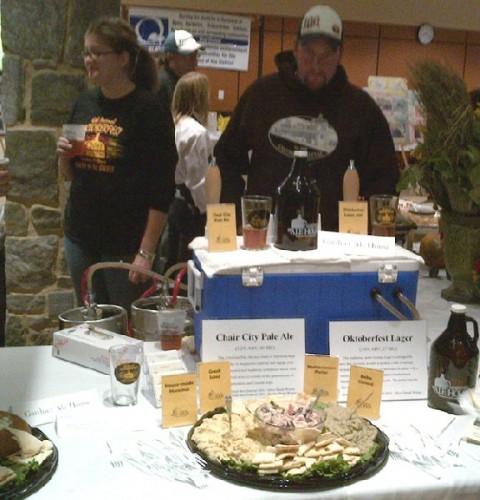 Manager of The Gardener Ale House, Stacey Kazinskas commenting on the Octoberfest in her hand.

Shortly after 7pm, Monday evening, armed with a ravenous appetite, I made my way into the main dining room at the Eagle Hill school in Hardwick where the QUEST sponsored, Tastefully Quabbin 2011 was under weigh.

As explained in an earlier article, QUEST, the Quabbin Educational Foundation for Students & Teachers produces this event annually as a means to fund projects in the schools of the Quabbin district.

I surveyed the room, noting what was being offered at each table, and vowed to avoid the more sinister and seductive confections that seemed to abound until I had consumed at least a modicum of more functional calories.

To begin I sampled a few nibbles of several varieties of aged cheese offered up by the Robinson Farm. I could easily have lingered there a lot longer but doing so would have precluded a reasonable survey of the rest of the room, so even though I am oft easily led astray by tasty cheese, I reluctantly moved on. I assembled samples of shrimp cocktail, rice noodle salad, skewers of chicken and beef, seafood chowder, a pulled pork sandwich and a portion of a veggie sub on my first round. I wet it down with a hand-crafted Octoberfest Lager. Then I went back to sample some of the more exotic offerings I had noted in my first round.

There were several participants with offerings that begged my palate for praise and praise them I shall.

The Barre restaurant, Picasso, was presenting a Vietnamese summer roll that consisted of a rice paper wrapping binding vermicelli rice noodles, tarted up with mint, cilantro and basil, fresh carrot and scallions, and chunks of lightly grilled Ahi Tuna. It was served with a Nam Chac dipping sauce made of rice vinegar, lime juice and fish sauce with the addition of fresh crushed raspberries. Accompanying this was a slaw of hand cut, locally grown cabbage and carrots, garnished with a mild creamy wasabi dressing. As I write this, I note the saliva being generated in my mouth at the mere memory. The flavors generated by these three elements some how managed to complement, contrast and reinforce each other with each bite. I was not able to limit myself to one helping.

Unlike Collodi’s fabled family, wherein Ghepetto fathered Pinocchio, the reverse is true here. Ware’s Ghepetto's Grill is a spinoff of Palmer’s Pinocchio, itself a reinvention of La Cucina di Pinnochio, once resident in Amherst. They offered two temptations, both difficult to resist. The first was a composite of broiled Portabella mushroom layered with Prosciutto,and topped with roasted red peppers, roasted garlic, Extra Virgin Olive Oil, lemon juice, and basil. It was, to use a technical term, scrumptious. The second offering, a desert, was a vanilla bean flavored Crème Brule topped with a grating of orange zest and a flame crusted sugar glaze. Its flavor was delicate, the texture smooth and the sweetness tempered to just the right degree. i.e. as much as I required, and far below what I might tolerate.

The Gardener Ale House was serving two of their hand crafted brews, their perennial Pale Ale and their seasonal Octoberfest Lager. After tasting both, I found the Pale Ale to be a bit less flavorful than I prefer in a Pale Ale, while the medium amber hued Octoberfest had a pleasing moderately complex flavor, and a nice crisp finish, all of which supported the clean gently bitter aftertaste. It left my palate fresh. They also provided a selection of dips, and while I sampled only one, a creamy spinach and artichoke combo, I found it piquant and an appropriate accompaniment to both brews.

At the Eagle Hill School Table, the shrimp cocktails were of individual shrimp served in a small transparent vessel.(See picture accompanying) Each succulent shrimp was partially immersed in a mild chunky salsa like sauce. They were dainty in flavor, the sauce complementing without interfering with the shrimps natural sweetness. The notoriety for Eagle Hill pastries was once again reinforced with a crisply wrapped, dark mocha flavored creamed cheese piece of indulgence destined to overwhelm any dietary resolve it came upon. It humbled mine.

I found it a revelation that there were so many fine dining opportunities unkown to me, and untried by me so near to hand. That the discovery of these was coupled with supporting many creative projects in our Quabbin school district increased the substantial regard I already have for my district neighbors.