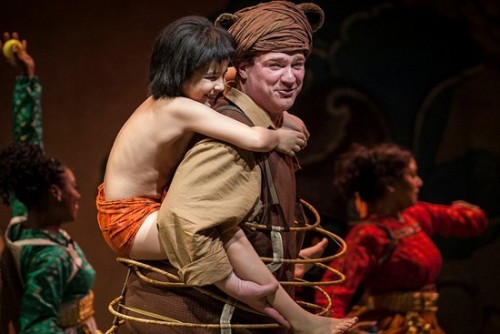 Mowgli in a bear hug. 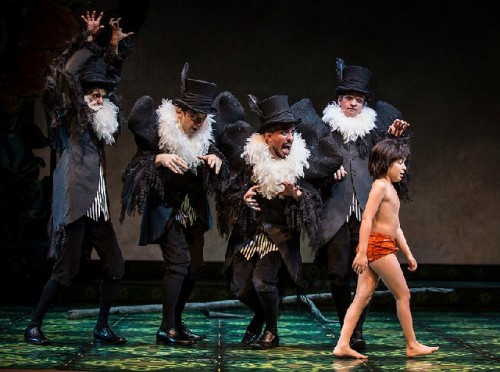 Mowgli and the Vultures.

On October 8 we attended the 100th performance of the boffo, smash hit Jungle Book a stunning fantasy driven musical created and directed by Mary Zimmerman based on the book by Rudyard Kipling.

Having been twice extended the show must close on Sunday, October 20. Including tonight, that’s just 8 more chances to see a sensational new musical at Huntington Theatre Company which seems destined to run forever on Broadway.

This is a show for children of all ages which has just about everything from awesome sets and costumes, to fabulous fusion music augmented by Indian instruments like sitar and tablas, and just stunning performances. (Mark Favermann review.)

Amazingly, the show hinges on the preconscious, adorable, and utterly captivating performance of the terribly young and spectacularly talented wolf-boy, Akash Chopka, as Mowgli.

He is on stage flawlessly for an incredible two acts that just fly by at two hours each. We hope the theatre is adequately heated as he just wears colorful print briefs.

Mowgli evokes a broad range of instincts in the animal kingdom from those motivated to cuddle and nurture the lost boy to predators who view him as a potential tasty meal. We just loved the animals from wolves who nurture him, a big huggable bear, slithery snake, hungry old tiger, wacky monkeys and my absolute favorites, the vultures.

We discussed the project this summer with its creator Mary Zimmerman while the show was running at the Goodman Theatre prior to a transfer to Boston. As a part of the research she and her collaborators visited India to absorb the flavors and textures of that exotic culture. The results of that experience are richly evident particularly in spectacular sets which she described were inspired by studying Indian art and textiles.

On the Tuesday night that we attended there were a number of children in the audience. What a delight to share the inspiring musical with youngsters. Surely they thought of themselves as having adventures like those of Mowgli.

That’s what dreams are made of and Kipling composed such a rich and evocative tale for the ages.

It is also wonderfully instructive about the laws of the jungle and their natural instincts of the survival of the fittest. These are compelling lessons that Mowgli must learn or he will quickly turn into lunch meat.

On Saturday, September 28, The Jungle Book became the most successful production in the company's 31-year history, grossing $1,729,309 to date. There is still a week to go to add to the bottom line.

In addition to the Goodman Theatre and Huntington Theatre Company this was produced in special arrangement with Disney Theatrical Productions. Now that the musical has set box office records it may be a sequel to Disney’s cash cow The Lion King.

It seems inevitable but until the end of this run nobody is talking about what’s next.

When and if it gets to the Great White Way anticipate it running the table of Tony and other awards. Hey folks, it’s that good.