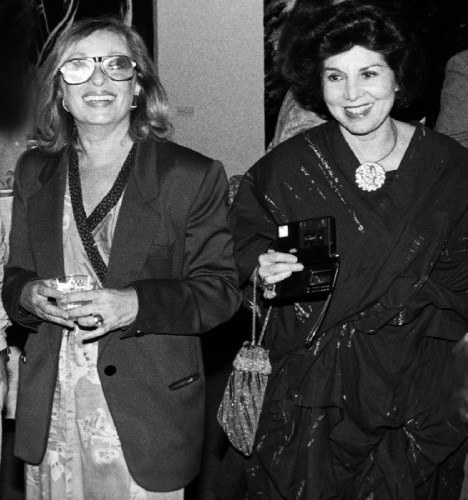 Phyllis Rosen, left, and Joan Sonnabend of the seminal Obelisk Gallery in the 1960s. Giuliano photos. 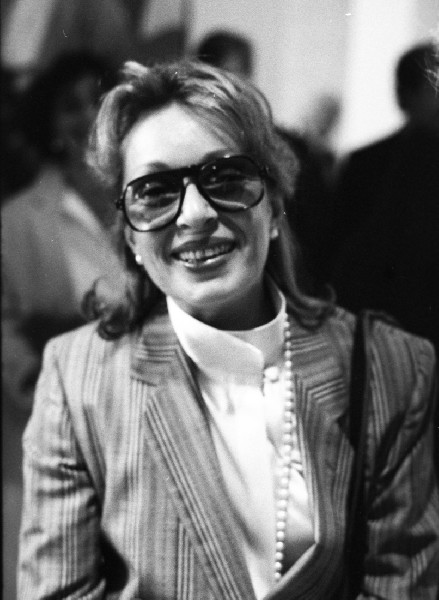 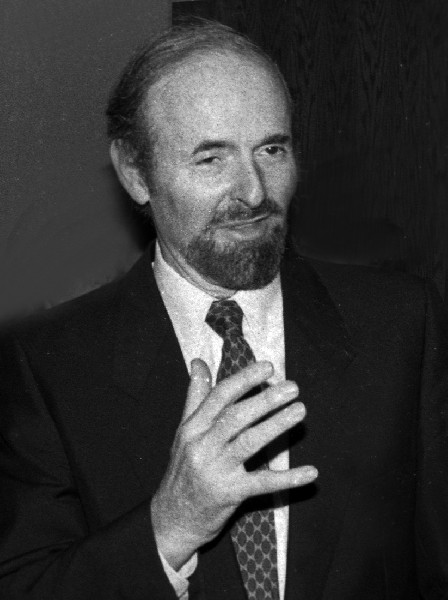 Roger Sonnabend was an executive in the family owned Sonesta Hotels. 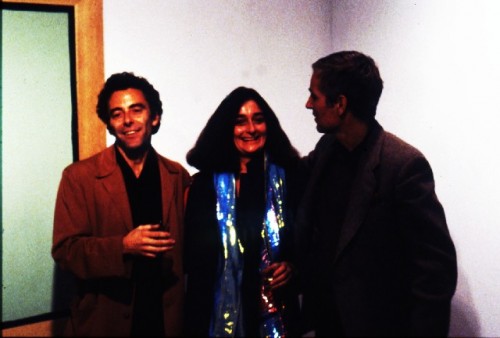 Three if by Air at Obelisk Gallery with Andy Tavarelli. Katherine Porter and Tony Thompson marked a new era of contemporary Boston Art.

During the late 1960s Phyllis Rosen and Joan Stoneman operated Obelisk Gallery on Newbury Street. It was by far the most interesting and progressive gallery of its time.

Joan (Stoneman) Sonnabend passed away on December 21. She graduated from Sarah Lawrence College in 1950. Accordingly we estimate that she would have been in her early 80’s.

The late 1960s was the end of an era dominated by the Boston Expressionists and the Boris Mirski Gallery which represented them. Pace Gallery lasted a year before departing for New York. The most progressive/ visionary gallerist, Hyman Swetsoff, who represented Bruce Conner then living in Brookline, was murdered in Bay Village by rough trade.

Things were happening. A new generation of Boston artists were showing in a basement of Tufts University in Medford dubbed Gallery 11. It was the only venue receptive to their work.

By the fall of 1968, after a summer with David Wilson publishing a renegade Avatar, I joined Boston After Dark (later the Boston Phoenix) as its art critic. The Boston Tea Party was active and after midnight Peter Wolf was broadcasting rock on WBCN-FM.

A group of artists who had shown at Gallery 11 gathered in the living room of Jane (Hudson) and Andy Tavarelli. Out of that meeting emerged the Studio Coalition the first Open Studios in the nation. The event was an enormous success.

With John Chandler, later a curator for the ICA under Drew Hyde when it was located in the Parkman House on Beacon Hill, we approached Phyllis. The pitch was that Obelisk Gallery might take a chance by showing the new generation of artists.

The result was Chandler’s show “Three if By Air” which featured Katherine Porter, Andy Tavarelli, and Tony Thompson.

Joan married Roger Sonnabend an executive for Sonesta Hotels. She influenced the hotel chain to commission and purchase significant works of contemporary art. It was a policy on the cusp of corporations investing in major collections.

One of the first examples of this far sighted policy was the installation of works in the Royal Sonesta Hotel in Boston. As an undergraduate I was a laborer while the hotel was under construction. This past August we returned as guests. It was a delight to see how well the collection has endured the test of time. Including several superb works in our room. It is fair to say that the hotel’s collection is now worth far more than the original investment.

The late art critic, Nancy Stapen, was commissioned to write a catalogue of the collection.

During the summer of 1969 Joan and Phyllis were working on a project for a new Sonesta Hotel in New Orleans. I was offered the opportunity to participate. The initial idea was to create a lithograph. I produced some sketches on the theme of New Orleans jazz.

Then came the bad news that my potential share had shrunk. There was not enough money to create a print with a fee. I asked how much that might be? It was about $1,000. It was summer. I was broke and living with a friend in Roxbury.

I said let me do water colors. They said, OK. Fifty. I agreed. They supplied the paper, double elephant, and some materials.

Once in the swing of it I was doing two a day. I got books and record albums and created a history of jazz, blues and rock. They were awesome.

An assistant, Rika Olson, kept calling asking when I would deliver the work? I was holding up the framing and shipping.  Several were rejected, the early ones actually. Which they kept. I cranked out a few more. Then two more as suggested "gifts" for Roger. One for the office and one for the home.

A couple of years ago while in New Orleans I tried to track down those works. But no luck. Haven’t seen them since they left the studio.

Joan continued to work with a number of artists on various global hotel projects. Those I have spoken with about those commissions report striking tough deals. Mostly they entailed swaps for fabulous vacations. Joan was remarkably loyal to the artists she worked with and they speak well of her.

As the scale of work outgrew the boutique spaces on Newbury Street Joan and Phyllis merged with two other dealers, Portia Harcus and Barbara Krakow. Together they operated Parker 470 on a street across Huntington Avenue from the Museum of Fine Arts. It was a magnificent space which they programmed superbly.

It became the setting for a series of artist gatherings and panels. One entailed inviting Perry T. Rathbone then near the end of his tenure as director of the MFA. It was a polite meeting which turned hostile when Joan Trachtman, the wife of the artist Arnold, bluntly asked why the museum did not show contemporary art.

Not long after the Smart Duckys and friends famously staged a happening/ exhibition Flush with the Walls in the museum’s men’s room. Rathbone folded and told me in an exclusive for the Herald Traveler that he appointed Kenworth Moffett as curator of 20th Century Art for the MFA.

Parker 470 had an enormous impact representing the turning point in the history of  contemporary art in Boston. But the gallery closed for a variety of reasons. It was literally on the wrong side of the tracks and there were mugging incidents in the parking lot.

For a period of time the four partners relocated to a generous space in the first block of Newbury Street steps from the Ritz Hotel. It bore the rather cumbersome name of Harcus/Karakow/Rosen/Sonnabend Gallery. It was, unquestionably, the most important gallery on the street.

After a brilliant run the complex partnership dissolved. Krakow opened a gallery across the street where she continues as an influential gallerist. Harcus opened a large space in the Leather District near Chinatown. For a time the area flourished with galleries operated by Mario Diacono, Thomas Segal, and Howard Yezerski. Since closing her space Harcus continues as a private dealer.

Phyllis Rosen, the most visionary and smartest gallerist of her generation passed away at mid career. Her partner Sonnabend dealt privately out of her home on Beacon Hill and continued to work with Sonesta Hotels and other corporate clients.

Joan Sonnabend will be remembered and appreciated for being in the thick of it during a vital and sanguine era of contemporary art in Boston.