An Update with Michael Conforti 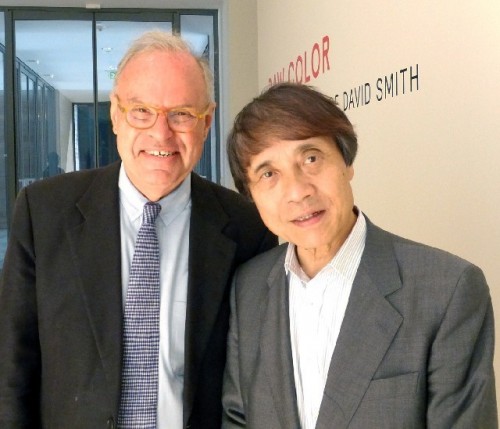 At the end of June we covered the reopening of the Clark Art Institute in Williamstown completing a multi-year, $145 million renovation and expansion designed by the Japanese architect Tadao Ando and associates.

This project has resulted in global media coverage not just for the expansion but a dazzling program of special exhibitions. In addition to the renovated and reinstalled permanent collection this summer the Clark has featured rare ancient Chinese bronze vessels loaned by the Shanghai Museum, a focus on Magna Carta and related documents, Making It New, a survey of mid 20th century abstraction from the National Gallery and polychromed metal sculptures by David Smith.

Following the past paced Berkshire season it was our first return to the Clark for the opening of the Magna Carta and to attend a symposium Making It New Conversations on Mid Century Abstraction.

For journalists the Clark’s director, Michael Conforti, a jet setting globe trotter, is a moving target. It is best to catch him when you can.

Typically, he had just returned from a meeting at Russia’s Hermitage museum.

Charles Giuliano This is the first summer with the renewed and expanded campus. Has the season lived up to your expectations?

Michael Conforti It exceeded expectations for a number of reasons. The attendance was very very good.

CG Do you have attendance figures?

CG How does that compare with past attendance?

MC It’s as good as it’s ever been. The more important thing is that the critical reviews were so extraordinary. As you well know.

CG I wrote one of them.

MC Exactly, and the New York Times. You should actually look at, by the way, and possibly translate for your audience, we have the translation, the magazine Le Monde in Paris. ("Mais depuis les années 1950, la ville héberge la prestigieuse collection d'art d'un couple de millionnaires. De quoi donner naissance à l'un des plus grands musées du pays, le Clark Art Institute.") The biggest Parisian newspaper did a wonderful article in its magazine. There were other French articles and the Spanish press. There are things still coming out but it was international notice.

Everybody is aware of what happened here in the Berkshires. I have to say, except for one opinion piece in the Boston Globe which people seem to have read, almost everything was positive.

CG Was that by Sebastian Smee or Robert Campbell?

MC No, no, no they were both very positive. Although Robert Campbell had some comments they were both very positive. It was sort of a letter to the editor kind of thing. It wasn’t really an article. Sebastian was unbelievable. The Roberta Smith article (NYT) said, which you read, I don’t want to say this in public, you know what it said, “No museum in the country should plan an expansion before coming to the Clark.”

CG Why would you not want to say that?

MC I wouldn’t want to be self promoting.

CG It’s on the record and publicly stated.

MC You should see it yourself and I shouldn’t be saying it.

CG Modern art (Making It New loans from the National Gallery) looks so great down there (new lower level galleries) are we going to see more like that? Are you moving further into the 20th century?

CG Treasures from the Prado?

MC All art is contemporary. It’s a question of whether you put things that were made recently in your spaces and how you put them in. It’s not about competing with other organizations in the area like Mass MoCA who have a special focus.

CG We are looking forward to your synergy with MoCA.

MC We have always worked with them and been their sponsors. We did their upside down trees. They plant their slightly weakened upside down trees on our campus. We continue to have many, many programs with Mass MoCA. Whether or not we actually do exhibitions together is not really important.

We all think, and everybody in the Berkshires does, collectively, about the world outside. They think about the importance of bringing the world outside into our special cultural environment. It’s what we have here. It’s our common goal.

CG When do you plan to develop the building you have leased on the MoCA campus?

MC On Mass MoCA’s campus? First of all I want to say, for a little organization like us, to achieve all of this is quite amazing. It took us a very long time. We will address all of our projects in the future in due course. That course has to be put into a time line.

One thing about the Berkshires is that The Berkshires are patient. They wait long times for things to happen. But things do happen. The Mass MoCA idea of the 1980s actually was realized. Developing the campus plan which took forever was actually realized. We will realize everything that’s part of our dreams.

We have to do it at a pace that’s reasonable and responsible.

CG You are currently exhibiting what is arguably the most important and valuable 20th century painting by an American artist; Jackson Pollock’s “Lavender Mist.”

MC We’ve been so fortunate to have it here.

CG How did you manage that?

MC We wanted to have a scholarly curator to maintain our tradition of scholarly exhibitions. We picked early on Harry Cooper. He was a former guest scholar at the Clark. We asked him to be the curator for our show. As it happened his own institution needed to close. So it was simply circumstance.

CG Critics have noted that the scale of those galleries is just perfect for modern and contemporary art. The installation of Making It New is just stunning. It begs the question of why build a space with those dimensions if you don’t want to go strongly in that direction?

MC Well. No. I don’t think that’s the case. That space is designed for a variety of different kinds of works we’ve never been able to show. Large sculptures. Which includes mid 20th century abstraction. For our first show we definitely wanted to do something that people assumed wasn’t a Clark subject.

CG It was a home run.

CG In what terms do you think of it?

MC We think of in terms of what it makes as a contribution to the critical conversation of that period of art. If you look at the catalogue for the exhibition you realize that we had one of the smartest curators in the country, Harry Cooper, thinking anew about works of art we had talked about completely. We had assumed that Clement Greenberg was the last word and we didn’t want to hear any more about Color Field Painting. But Harry brings a new life to it and a life to the early 21st century.

MC Tomorrow (actually not). I hope you come tomorrow afternoon. (We did for Make It New Conversations on Mid-Century Abstraction organized by Darby English with Brice Marden and Vincent Katz; Glenn Ligon and Byron Kim; Amy Sillman and Thomas Eggerer with closing remarks by Yve-Alain Bois, Saturday, September 6 ) To answer your question to bring a panel like that together for lively conversation around issues that we thought were already treated.

In some ways those galleries look like what one might remember from the 1960s and 1970s. From a critical perspective what Harry brings to it is a totally fresh one. It is seen in the labels in the gallery and the specific juxtapositions that are there. It is seen in the essays in the catalogue and it will also be seen in the observations that these artists and critics make tomorrow.

CG During the renovation the treasures of the Clark were on a global tour to great museums like the Prado. In the quid pro quo of organizing exhibitions it is assumed that you now have markers and chips to call in.

MC We, we don’t think in those terms. We work with many institutions around the world and we will continue to have conversations.

I was in Russia a few days ago where I am on the Hermitage advisory committee. With many of the people who have been helpful to us in our engagements including Gabriele Finaldi (deputy director of collections for the Prado Museum) we were talking while we were there about further programs.

CG In the tour of the Clark collection the Hermitage didn’t participate.

MC They can’t actually as there’s a freeze on loans between Russia and the United States.

MC Gabriele and I are talking about projects. He was here this summer with his whole family. All six of his children were here. Along with his wife they were here for the summer. The Clark is a special place. Scholars from around the world love to spend time here. Henri Loyrette the former director of the Louvre is asking to come to the Clark for a period of time. The Clark is a center it’s a beacon for art critics and art historians as you will see tomorrow. This is what we are. We are not just an objects and exhibition factory.

CG Is it not logical that we will have Treasures of the Prado?

CG Thank you for your time.